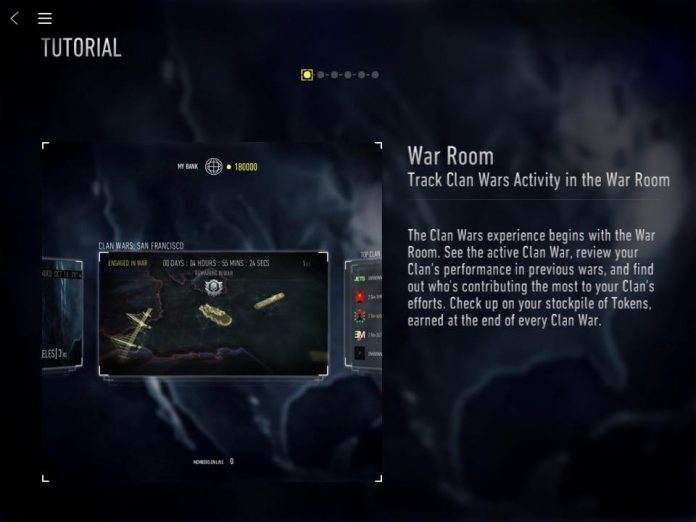 There has been a common theme from day one of the release of Advanced Warfare, and this that you are on your own when it comes to understanding the mechanics of this game, leveling up your Clan and the Clan Wars.

If you would prefer a written version please see below this video.

After a couple of weeks of waiting the Clan App finally seems to be working and updating in real time meaning that Clans can see just how far they have come already.
With the update of the App has come a whole new pile of questions, the most common one being ‘how does the Clan Bank work and what is it for?’
The official stance on this from Beachhead Studios so far has been that they will reveal details on how the Bank works at a later date.
Not very useful, I know. What I do know and can tell you is that you will earn points that are added to your Bank by competing in the Clan Wars which you can use to ‘spend’ at a later date.

Now some Clans will find that they have already started to accumulate points which, clearly means that this is not the only way that you can earn these as the Clan Wars have not yet started.

Gauging from the conversations I have had with other Clan Leaders and the amount of points they have versus the level they are on, I think it’s safe to say you also earn Clan Bank Points for leveling up the Clan.

You will have noticed that there are Clan Calling Cards that you can unlock with no specific information about what it is that you need to do to unlock these.
As my Clan has already unlocked a couple and we have done nothing out of the ordinary, it’s quite clear these are unlocked by earning a set number of Clan XP. We are used to un-lockables like this in previous Call of Duty releases so that is nothing too exciting. What I do find curious though is the lack of Calling Cards that are available for Clans and there is also no mention of what level you will receive your Clan XP bonus at.

Could these points you earn for the Bank be for exactly that?

When you get a certain number of Clan Bank Points accumulated can we perhaps then go and purchase DBL XP rewards for the Clan with them?

I felt the need to share with you what I already know about the Clan Bank and my theories on what it’s all about as I am being asked this question multiple times every day, so hopefully this will give you a better idea of what we can possibly expect from the Bank.
I also have a feeling that these Clan Bank Points will work in conjunction with items that are normally only available via microtransactions. Many people take issue with having to buy customization packs so this would be an interesting way of tackling that to try and appease those that this upsets so greatly.

I have been keeping a very close eye on all of this so as soon as there is confirmation of exactly what the Bank is all about I will update you further.
Given that Beachhead have indicated the Bank is tied to the Clan Wars and the first one doesn’t kick off until this weekend, I expect to have more information for you by mid next week at the latest. As soon as I know what the go is, so will you.

The other new piece of news that I have for you concerns those that play in the Ranked Playlists.
A common complaint about the Ranked Playlists is that many people are being put into games that are well underway, sometimes they are just about to finish and this often results in a loss.
As most of us know, the main reason usually that there is room on a team is someone has rage quit because the conditions were not to their liking (aka getting spanked) meaning that the burden on the remaining team members to win that game is a lot higher.
This is resulting in many people who play Ranked Playlists either by themselves or with one other person, having to struggle to keep their rankings up due to no real fault of their own.
Michael Condrey however is on the job. He acknowledges this problem and a patch to rectify this is on the way.
This patch, whilst it has no release date as of yet, will prevent people from being able to join Ranked Playlist matches that are already underway.
So those of you that are stressing about your current ranking in this pre-season, you can take some peace in knowing that this will be resolved shortly. Hopefully that ‘shortly’ will be prior to the start of the first Ranked Season set to begin in December.