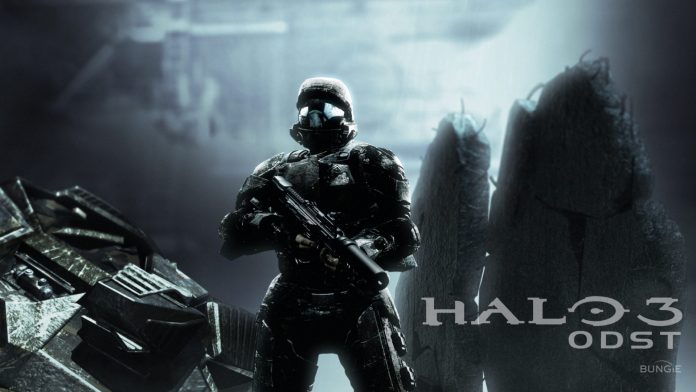 Did you race out and buy The Master Chief Collection for Xbox One only to find multiplayer unplayable? Well not only is that now completely fixed but the compensation for your frustration is now available. As a part of that collection!

Halo 3: ODST is now available on the Xbox One. Here is a bit about why you should be excited to play this, from the Halo Waypoint blog:

From a character standpoint, Halo 3: ODST was a veritable

highlight reel of roles to both play as and alongside. Headlining the crew was Gunnery Sergeant Edward Buck (Nathan Fillion), who led his squad – Alpha Nine – into the heart of a Covenant-held New Mombasa at the behest of the Office of Naval Intelligence and Captain Veronica Dare (Trisha Helfer). Under Buck’s command was Dutch (Adam Baldwin), Mickey (Alan Tudyk), Romeo (Nolan North), and the primary player-character, a still-green ODST known lovingly as “the Rookie.”

What begins as already a less-than-routine engagement for the team as they drop in from the UNSC Say My Name, goes even further awry as the Prophet of Regret suddenly decides that making a slipspace jump in-atmosphere is a good idea (spoilers: it’s a bad idea). While the Master Chief, Sgt. Johnson, Commander Miranda Keyes, and the rest of the crew of the UNSC In Amber Clad goes chasing after Regret, the ODSTs of Alpha-Nine as thrown off course and scattered across the streets of New Mombasa; streets that become more dangerous with each passing moment thanks to the increasing occupation of the Prophet of Truth’s Jiralhanae-led forces.

Unrelated, “Chasing after Regret” sounds like a good name for a post-hardcore side project band. Anyway, it’s on these harrowing and dimly lit streets of new Mombasa that you begin your adventure as the Rookie, who now must try and piece together what has happened in the six hours since their pods came crashing down to Earth. Throughout the campaign, fans take the role of multiple characters as they try to not only survive, but recover a vital intelligence asset along the way.

Now if you didn’t purchase and play The Master Chief Collection before December 19th you won’t get it for free. However, still want to get your hands on this? You can purchase it from the marketplace for only $5.

A big thank you to Bonnie and 343i as I can’t wait to get my hands on this later today!