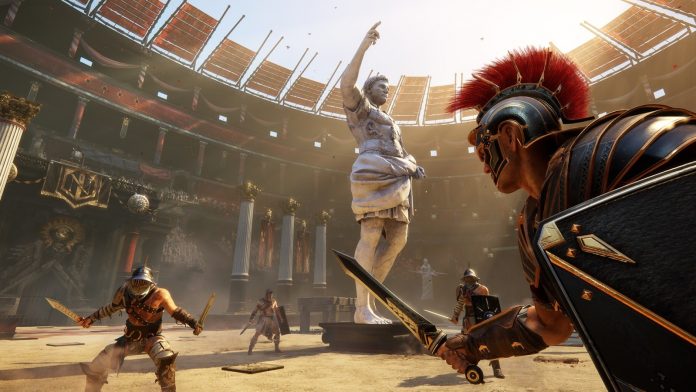 It’s a difficult position to be in as a launch title. On one hand your job is to show new console owners something they haven’t seen before, an immediate sense that they couldn’t be seeing this on anything other than a shiny new console. On the other hand it’s also a hope that a new franchise will be born that will captivate the end users for the entire generation to come. RYSE: Son of Rome tells the tale of Marius Titus, a Roman General fighting against a Barbarian attack on Rome. At the outset, Marius is fighting against these Barbarians all at the behest of the Roman Emperor Nero. After this exciting introduction to the game and story, Marius secures Nero in a safe house and begins to tell his tale through a series of flashbacks leading up to the events you just played through. The story is actually a high point in the game, everything from political intrigue to mythology and mysticism is wrapped up in an enjoyable tale that serves to motivate the player to endure to the end; yes I said endure.

Gameplay is something that seems to always never quite make the mark with launch titles for new consoles and RYSE suffers this same fate. Quick Time Events (QTE) were universally panned upon the first showing of RYSE and the game could never quite get beyond its initial showing; many games have used them in the past and even at times quite well so it was a strange predicament that the game and the developer found themselves in.

Combat in RYSE is a combination of attack, defend, block and either engage in said QTE, which by the way allows for upgrades to each of the aforementioned, or ignore the QTE and just finish off your enemies through the normal flow of combat. It’s a dance that becomes all too familiar and ultimately is the biggest Achilles heel of the game. For me, RYSE unknowingly would serve to almost define this entire Generation in the sense that it was the first title that spawned the “Resolution” debate. Crytek, known for brilliant work in the field of computer graphics, decided that to implement all the “bells and whistles” in their game they would lower the native resolution from 1080P to 900P. This obviously allows for greater detail and effects in games on console; closed boxes with limits in their power. Since then, this debate over what is and isn’t acceptable in games has devolved into where we are today. There is no closed system that allows its users to have their cake and eat it to. Trade-off is inevitable and we are at the point now where it should be clear.

Graphically, RYSE: Son of Rome is one of the best looking titles to appear on console period. The level of detail and texture work is amazing, so much so that RYSE won the prestigious SIGGRAPH award for ‘Best Real Time Graphics’. A lack of diversity in gameplay and repetitive enemies can’t keep a game engaging no matter how pretty it is and it’s this again that serves to drag RYSE down. As a launch title did RYSE: Son of Rome show new console owners things they had not seen before? Yes. Was a new franchise born that could have evolved over time into something great………? Saying no has a finality to it that I don’t think this game or Crytek deserves just yet. With time and patience, a stellar rework of the combat engine, diversity in weapons and enemy types, RYSE could be an amazing franchise. Now I realize that is a tall order, but sometimes games come along and just miss; barely, but miss none the less and I’d be remiss as a gamer if I didn’t leave the door open; even if it’s just a crack!