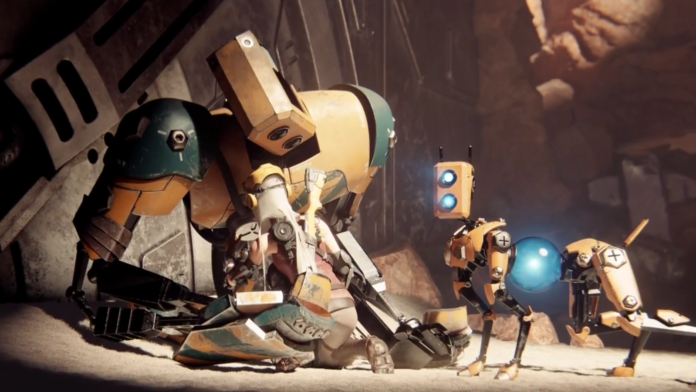 At Microsoft’s E3 press conference last week we got to experience the world premiere of a new franchise called ReCore.

This new IP really captured everyone’s attention. The trailer represented what we expect from current gen graphics, the brief storyline showed prompted an emotional reaction from viewers, and the promise of what this franchise could bring to the Xbox One excited the entire community. From Keiji Infaune, the makers of Metroid Prime, working with Armature Studio, comes a tale of both hope and desperation.

Jewel is a young girl on her own on a planet populated by robots that have no care for its previous inhabitants. Luckily Jewel is found by Mack, a dog-like robotic creature who is a part of a faction that wants to help bring humanity back to this world.

Jewel and Mack travel together fighting off mechanical menaces that get stronger and stronger as they go along. As a young girl in a barren land by herself one can only imagine that Mack becomes like family to her.

When reaching a destination, Jewel and Mack discover the ‘lifeless’ body of a fallen comrade. They head in for closer inspection of what seems to be a deserted location only to find themselves suddenly surrounded by enemies.

There is too many of them, they can’t fight them off and both survive, so Mack selflessly sacrifices himself in a self-activated explosion to kill the enemies and save Jewel’s life.

It was at this point when many people in the crowd of Microsoft’s E3 presentation and no doubt around the world watching digitally, felt at least a tear well up in their eyes.

What we didn’t know when watching this trailer is that Mack’s consciousness is contained within that bright blue ball in the center of him, his ‘core’. By taking that core and placing it in another robot, Jewel is able to reunite with Mack again.

They then embark on an even greater adventure, opening a bizarre sealed doorway which has not been opened in hundreds, maybe even thousands of years.

A mass of enemies awaits them, they both charge into battle, and that is where the details end.

Could this be the future of humanity? Is this how we will end, taken over by robots and fighting to preserve what little is left of humanity?

We will now have to eagerly await more news and reveals of this captivating new franchise to find out more details.

ReCore it set to be released in the Spring of 2016, exclusively on Xbox One.

I have included two videos for you, one is the reveal trailer and the other is a brief interview conducted with ReCore’s creator Keiji Inafune and Mark Pacini.