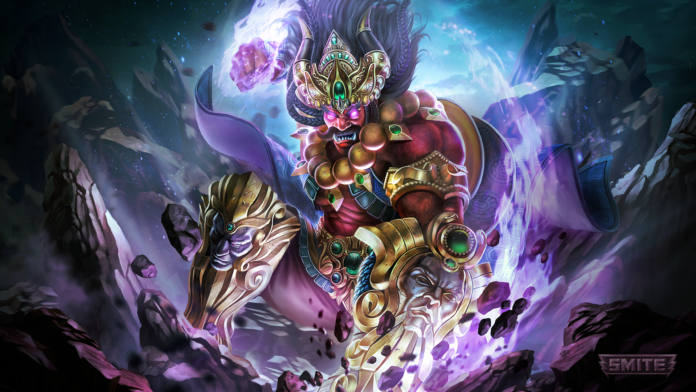 A new character has been added to SMITE. Ravana, the Demon King of Lanka has been unleashed into the world of SMITE.

Entering the arena with a “Combo Breaker” Ravana is a Hindu God who is a martial artist and apparently is an all mighty conqueror.

Here is a bit of back history for you of this new character Ravana, brought to you by Hi-Rez Studios:

Power does not come without sacrifice. The greater the sacrifice, the more immeasurable the power. Ravana, the Demon King of Lanka knew this. For years he worshipped, showing his devotion through isolation, prayer, and penance before the shrine of Shiva. Yet for years he was met with only silence. In his pursuit of immortality, he sacrificed his very life. He cut off his own head.

Agony and pain met him as it regrew. He was greeted not by death, but by rejection. Shiva the Destroyer did not want him. Ravana was undaunted. Nine more times his head was offered, and on his tenth sacrifice, Shiva was finally sated.

For the Demon King, Shiva granted a boon. Instead of immortality, he gained invulnerability against those he viewed as threats – gods or demons. Ravana could not be destroyed.

A master of combat, a genius scholar, a peerless leader, and now invincible, Ravana amassed an army of fiends and monsters to conquer the world. None could stop him. The Monkey King tried, but Ravana fought off his attacks. The Demon King’s armies conquered all, leaving Ravana to rule from the golden throne.

Vishnu, in his wisdom and grace, would not permit Ravana’s dominance. By gods and demons Ravana could not be harmed, but by mortals…

Thus was Vishnu reborn as Rama, a mere man. Now trained as a warrior, Rama calls the Demon King to battle.

Pride scraping like a knee on stone, Ravana rallies his monstrous siblings, his conquered allies, and his formidable army to answer Rama’s taunt and their rivalry will shake the world.

Along with this new inclusion comes a Patch Update that includes balancing updates that affects the competitive scene, new God skins, and voice packs for the characters:

Now onto the open beta announcement for Xbox One:

Many of you have been trying eagerly to get your hands on a beta key for SMITE on the Xbox One, now as of July 8th the beta will in fact be open to all on the Xbox One. Be sure to check the marketplace on the 8th.

So now onto the launch video for Ravana, enjoy: