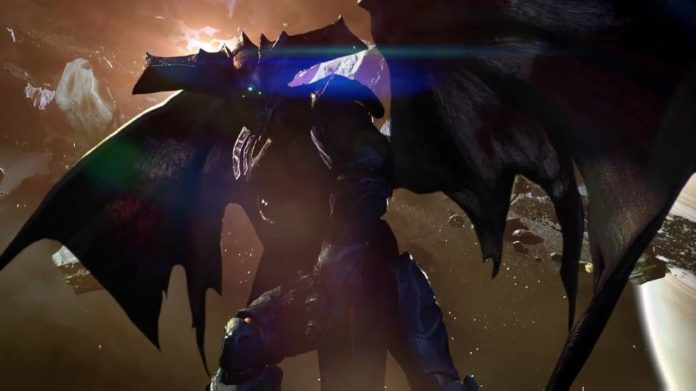 I have pulled myself out of a long slumber to tell you the tale of a King,  The Taken King.  Friday, the new end game content for the most recent Destiny DLC, The Taken King went live with  The King’s Fall Raid.  Below I will detail and review what I saw on the inside of oblivion.

The raid starts in a newly familiar place, The Court of Oryx is your portal into Oblivion.  After a test of teamwork, your fire team crosses into a realm filled with hidden hallways, jumping puzzles, sub bosses and incredible loot.  Prepare to embark on your journey to slay a king. Bungie has pulled pieces from previous raids and added a bit of spice to create an incredible encounter.  Kings Fall is visually stunning, with environments that feel massive, even endless at times.  Eventually you’ll work your way up to the Raids front door.  A 3 plate system that is reminiscent of the Bridge faze of the Crota’s End Raid.  Once through you’ll encounter bosses that are exactly what they should be, bosses, each with their own mechanics and identities.

The first of which is the Warpriest.

A ritualistic encounter that will require your team to interpret some hive rune’s for success.  This is a battle arena which will require your team to control 3 plates in varying sequence all while managing hoards of adds.  If done properly, you’ll have a chance to damage the boss, however only if your team can move together as a pack.  Think Vault of Glass.  The Atheon fight.  Remember the relic  Imagine that, moving, and it’s not a shield to incoming damage.  Pretty intense right?  Assuming you survive the first burn faze you’ll need to hide from his blast which clears the arena.  Rinse and repeat.  But don’t take to long……his “Enrage” is coming. It’s you or him.

A champion of Ogre’s and as expected, this guy is a bullet sponge.  However, he is a bullet sponge with a twist.  You’ll need to figure out several mechanics in order to do effective damage on the boss.  A gaze, a buff, and as always, adds.  After what seems like an entire wars worth of bullets……..you may find victory. Oryx, the Taken King.  He is everything a Destiny player could want in a Raid boss.  He has his own mechanics.  He demands challengers play as a team.  He requires the mastery of 3 phases in order to down him.  His death is as epic as the battle leading up to him.  I promise you, the first time you slay this king, you will scream like a kid on christmas morning.

I’ll leave you with this.  If you are considering buying the Taken King, either as a new player or as a seasoned veteran – BUY IT.  However, be prepared to spend some time.  No one is just jumping into the raid.  Their is so much content here it’s almost overwhelming.  I logged around 30 hours to complete all of the PVE quests and prep my character for the fight.  Which is a very, very good thing for a guy like me.