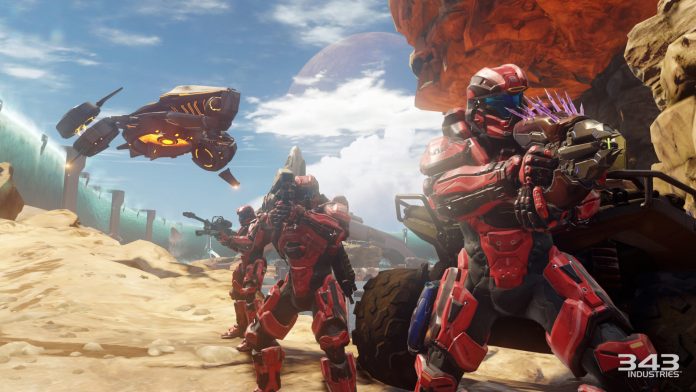 JOSHINGTONSTATE has taken to the Halowaypoint blog to explain all the details of how the Arena portion of the Halo 5: Guardians experience will work, along with Halo e-Sports, and the Banhammer Strikes.

Everything you need to know to be able to hit the ground running later this month is outlined below:

As we prepare for the game’s release in just over a week, I’d like to focus this blog on the Arena portion of the multiplayer experience for Halo 5: Guardians. Arena is our pure competitive experience in Halo 5, celebrating the legacy of Halo multiplayer. Arena allows players to go head-to-head in a game of skill where everyone starts on a level playing field. Each player begins with the same weapons and abilities and vies for possession of power weapons and power-ups by maintaining map control throughout the match. Last December, we held a beta for Arena almost a year from launch to get the game into the hands of Halo fans everywhere. Since then we’ve worked tirelessly to address player feedback and refine the game with the goal of delivering the ultimate competitive multiplayer shooter when we launch on October 27.

The Competitive Skill Rating (CSR) system in Halo 5 is designed to ensure high quality matches between players of equal skill, on a per-playlist basis. When you first hop into any of the Arena playlists, you will play a series of placement matches before being earning your CSR. After you complete 10 games, you will be placed into one of 7 CSR ranks based on your performance.

Coming out of the Arena beta, we’ve renamed the ranks based on community feedback to provide a more familiar and easily understood sense of progression between ranks. The final CSR ranks for Halo 5: Guardians are Bronze, Silver, Gold, Platinum, Diamond, Onyx, and Champion.

After earning your starting rank, the ONLY way to increase your rank is by winning. For team-oriented playlists, this emphasizes the importance of team play. Whether you drop 30 kills in a game of Slayer or single-handedly capture every flag in a CTF match, wins are the only way to improve your CSR. As you win, you will progress through the 6 tiers of your rank. If you are skilled enough to continue winning at tier 6, you will advance to the next rank (yay!). Losing games will cause your progress within a rank to decrease, but you will never drop down a whole rank from losing. For example, if you spend all month working your way into Silver, losing won’t drop you back to Bronze.

At the highest end of the ranking system, we have the Onyx and Champion ranks which behave slightly differently than the other ranks. Once you reach Onyx, you will be shown your raw CSR score. Winning no longer increases your tier – it instead increases your CSR score. This allows you to compare yourself with greater precision to other players within the Onyx rank. If you establish yourself as one of the top 200 players in a playlist, you will earn the highly coveted rank of Champion and be shown your place within the top 200.

Seasons are a new competitive feature for Arena that gives you a chance to continuously challenge yourself while having the opportunity to earn monthly rewards. When Seasons debut later this year, your CSR in certain playlists will be reset and you will play your placement matches again. You get a fresh start each month to try to prove yourself in select Seasonal Arena playlists. This gives you a chance to top your performance from last season, and see how high of a rank you can achieve. Seasons will last for a month, and anybody who earns a CSR in a Seasonal Playlist will earn cosmetic rewards to commemorate the Season. (Here’s a sneak peek at the emblem rewarded for the December season)

Season boundaries will also be an important milestone for when we make changes to the Arena experience based on community feedback. Once we launch, we will be listening for all types of feedback regarding Arena: favorite maps, mode settings, playlists, etc…We plan to implement all of these changes at season boundaries.

Finding a balanced, low-ping match is of the utmost importance when playing Arena. Halo 5 is designed to have a high skill ceiling, and we know how frustrating it can be to play with or against players who aren’t at your skill level. We prioritize match quality above all else when finding matches in Arena. We begin by trying to find other players that are at your exact CSR. If we can’t find enough players, we very slowly open up this limitation and look for players that are around your same skill.

Every Arena match starts from the beginning

In Arena, you will never join a match that’s already in progress. You will get a fresh match every time without fear of putting your hard earned CSR at risk and joining a losing team in the middle of a match. Your skill, teamwork, and decision making during the entirety of each match will decide whether you win or lose. Since joining a match in progress is disabled for Arena matchmaking (still available in Custom Games and in Warzone), quitting out of a match damages the quality and experience for the other seven players in that match. Leaving your teammates high and dry is not cool. If you quit out of games, not only will you suffer a loss and forfeit any REQ points or XP but you’ll also receive a temporary cooldown penalty (ban) preventing you from matchmaking in Arena.

It’s important to us that everyone enjoys their experiences in Arena play. To maintain the quality of the Arena experience and sanctity of competition, a number of rules are in place for all Arena playlists. Halo 5: Guardians is engineered to detect and track the following behavior:

If you repeatedly engage in negative behaviors such as the ones listed above, you will receive a ban and be prevented from entering matchmaking. The duration of each ban is dependent on the offense and becomes more severe with each successive infraction, so continually killing your teammates to steal the Sniper Rifle will quickly lead to long timeouts from matchmade play.

The Next Generation of Halo eSports starts October 27!

No matter what your skill level, Arena is the place to be if you are looking for old or new school multiplayer competition on Xbox. With our new CSR System, finely tuned matchmaking, fair starts, and a banhammer stricter than a MLB World Series Umpire – we are incredibly excited to offer a live eSport for all owners of Halo 5 to participate in.

Whether you roll solo or with friends – the time has never been better to step up and define your Halo career, relive the legacy of Halo, trash-talk your friends, or show our Pro-Team how it’s done!

Thanks for all the details Halowaypoint, this will certainly make things a lot easier on launch day!