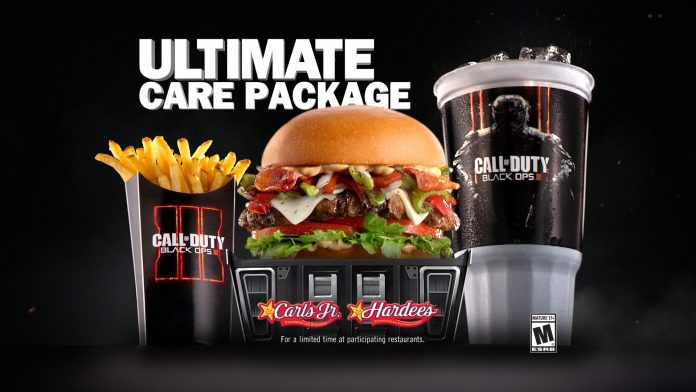 Fast food outlets Carl’s Jr and Hardee’s have made an announcement that they will be a part of a new partnership with Activision for Black Ops 3.

“Call of Duty is the most beloved video game franchise in the world and one of the biggest entertainment brands of all-time, so partnering with Activision for the launch of the new Call of Duty: Black Ops III presents a great opportunity to bring our brands together,” says Brad Haley, chief marketing officer for Carl’s Jr. and Hardee’s restaurants. “Our target customers love burgers, like our new Tex Mex Bacon Thickburger, and Call of Duty, so the two have now come together in an ‘Ultimate Care Package’ combo meal, complete with customized Call of Duty packaging that includes a peel-and-win game piece for a chance to win epic Black Ops III prizes.”

,“We’re thrilled to Partner with Carl’s Jr. and Hardee’s on this far-reaching program that truly benefits the entire Call of Duty community. This unique collaboration and campaign gives fans across the country a chance to win some great prizes in-game and in-restaurant, and, importantly, creates a special activation for our military veterans. We are very thankful to Carl’s Jr. and Hardee’s for their support of the Call of Duty Endowment, whose sole purpose is to drive our shared passion to put as many of our returning veterans into high quality jobs as possible.” – Rob Kostich, Senior Vice President and General Manager of Call of Duty

These outlets will now be serving up Ultimate Care Package meals which include:

By purchasing one of these meals you will get the chance to win a ‘Treyarch VIP Experience’.

So if you aren’t already hyped up enough on Mountain Dew and Doritos, put the final nail in the coffin and go grab yourself a nice big greasy burger with a side of deep fried chips and a large glass of sugar to wash it down with.

The Treyarch VIP Experience is a 3 day trip to Los Angeles that includes a tour of the Call of Duty design studio, Treyarch, and the chance to meet members of the Black Ops 3 development team. The Grand Prize Winner will also receive a gift bag full of Call of Duty: Black Ops 3 gear and a copy of Black Ops 3 signed by members of the studio (presumably for the PlayStation 4?).

The purchase of a Ultimate Care Package meal will also get you a chance to win a in-game personalization pack for Black Ops 3 or Astro branded Black Ops 3 mod kit.

Selected sweepstakes winners may also receive in-game items, including the “Take Out” personalization pack that features a specialized weapon camo decked out with a ketchup, mustard, and extra pickles.

To support this partnership, Activision and Carl’s Jr. and Hardee’s restaurants collaborated on a new ad campaign, titled “Best Day Ever,” featuring the return of Charlotte McKinney. This time, viewers will see her like never before – armed and ready for battle. McKinney saves the day in the middle of a pyrotechnic-filled trailer inspired from the world of Call of Duty: Black Ops III. McKinney even performed her own stunts in the commercial. The ad will premiere nationally on October 26.