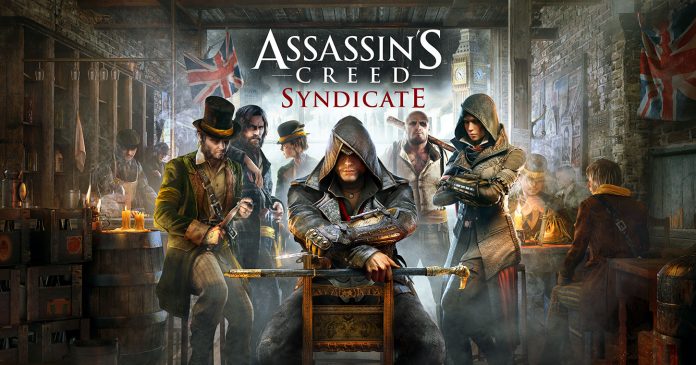 I was walking around the local shopping center and my mind went absent, blank and I retreated to my nothing box only to find that my feet were guiding me to the local game store where I found myself staring at titles. I scanned through the games on PS4 and saw that Assassins Creed Syndicate was coming out. For some reason the cover looked similar to the Assassins Creed Unity cover. I pondered in quiet reflection and decided that this was something that I wanted to inform you about, so here I am, writing and letting you know the latest details about Assassins Creed Syndicate in a style awfully similar to prose.

In this upcoming Assassins Creed (AC) title, the scene is set in the United Kingdom’s capital – London. According to the Ubisoft game site, you will play the part of an assassin (really!?) that will be fighting for the working class which is oppressed by more than likely the then corporate elite (I see where this is going, sheesh, capitalism right!?).

According to the game play you will be able to play as either Jacob Fyfe (the main character) or his younger sister Evie. (Insert ‘V for Vendetta’ quote – Voilà! In view, a humble vaudevillian veteran, cast vicariously as both victim and villain by the vicissitudes of Fate. This visage, no mere veneer of vanity, is a vestige of the vox populi, now vacant, vanished. However, this valorous visitation of a by-gone vexation, s tands vivified and has vowed to vanquish these venal and virulent vermin vanguarding vice and vouchsafing the violently vicious and voracious violation of volition. The only verdict is vengeance; a vendetta, held as a votive, not in vain, for the value and veracity of such shall one day vindicate the vigilant and the virtuous. Verily, this vichyssoise of verbiage veers most verbose, so let me simply add that it’s my very good honour to meet you and you may call me V).

This is a quote said to Natalie Portman who plays Evie, the main character in V for Vendetta …. If you haven’t seen this movie, highly recommend it. Ok I got a bit side-tracked there, but there is a method to my madness.

I decided to watch some game-play on the Assassins Creed YouTube channel and give you an update of what I saw. The vid shows some changes to the game-play in Assassins Creed. In Assassins Creed Syndicate you don’t have to get your hands simply on a horse and/or have to climb up a series of buildings to get away from guards or the Templars. They have a new addition called the ‘horse and cart’ that you’ll be able to utilize to escape or hide from your pursuers – otherwise a fun chase could follow… Need for speed horse and cart style. You will also have access to a rope launcher tool that will help you faster navigate and climb buildings than in previous AC titles and will also be able to use certain aspects of the environment in order to assassinate enemies; making a deliberate murder look like an unfortunate accident.

To me, AC Syndicate appears to be the movie gangs o f New York mashed into Assassins’ Creed though the scene is set in London. (If you haven’t seen ‘Gangs of New York’ then once again I highly recommend it – though you will lose 3 hours of your life).

I like the Assassins creed titles and think that this title ‘Syndicate‘ will be a lot of fun to play. According to the narrator of the YouTube video, the fight system will apparently be faster and more responsive than ever and if you like a good story then this AC title is definitely worthy of your time.

Assassins Creed: Syndicate will be released worldwide on the PlayStation 4 and Xbox One on October 23rd. The PC release will be available on the 19th November 2015.