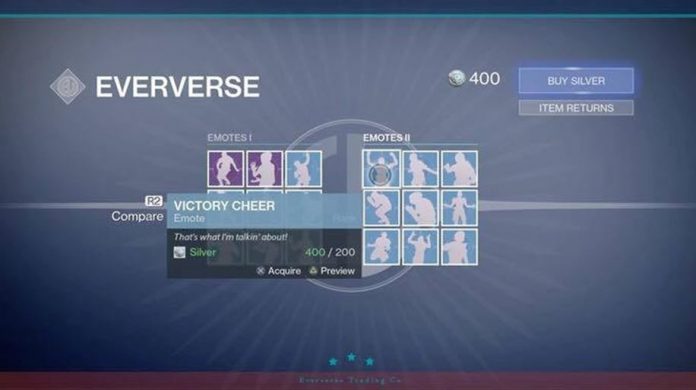 This week in the world of Destiny, we were introduced to the Eververse Trading Company, a store front headed up by an old friend, Tess Everis – Formerly our Special Orders clerk in the tower.  Upon her return, Tess has brought with her microtransactions.  A much debated topic in the gaming community.

Most agreeing that depending on the systems implementations into a game, can either kill an IP or make it thrive.  So, has Bungie done it right? Thus far, yes.  Silver is the new currency and so far, there is no end game advantage to forking over your hard earned cash for it. Up for sale are Emotes.  Special dances, gestures and taunts you can purchase for your character and all though this may be used to upset your opposition in PVP there is no other in game benefit gained from them.

Initially there were rumors flying around that she would also sell a “spark” or other upgrade material that may have allowed new players to fully upgrade their sub-classes.  This was a hot topic for veteran Destiny players, however Bungie has since denied the implementation or existence of such a material.

Let’s hope that the additional profits from the sale of silver will be shown in the form of some free goodies in the future.  The bulk of the Destiny community begging for either additional story content or additional weapons and quests.  Or, dedicated servers for the PVP experience.  Please god – Dedicated servers.

So, dance your hearts out.  Silver is a good thing (so far).