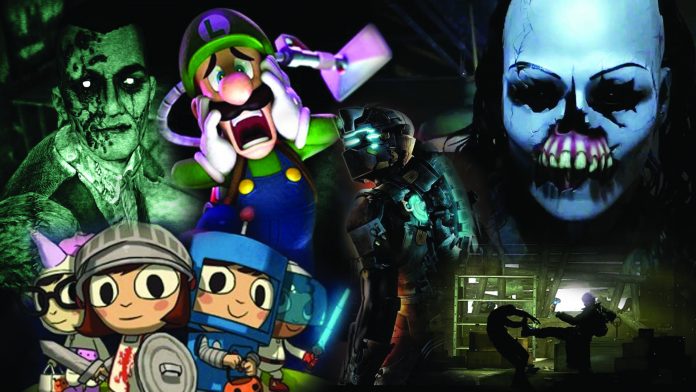 Hey there gamers! It’s officially October, which means it’s Autumn, which also means that Halloween is only a few weeks out. To mark the occasion the crew here at EXL decided to compile a few titles that can hopefully inspire you and put you in a festive Halloween mood! So without further ado here is the EXL list of games to give you a fright and hopefully a bit of delight…..

Survival horror games are meant to be played at night, with the lights off and the volume turned right up on your headset.

So that is exactly what I did. Not only that, but I decided to be in a party chat with a good friend who was playing through Outlast for the first time too. We thought it would be a novel way to experience a single player game together since we live in different states. To begin with it all went well.

You get your introduction into the game, the story behind the characters and the motivation that compels you, the journalist, to enter the asylum with nothing but a camcorder for company. Within minutes the first scare hits, I screamed which made my friend scream, so yeah, two grown adults sitting there screaming at a very cheap but effective frightening scene that sets the scene for what’s to come. As you navigate around the asylum trying to ascertain what exactly has happened here and why this place has secretly been reopened, you have to focus on avoiding any of the lunatics that are now running free and WILL kill you if they get their hands on you.

There is more dark than light, so you have to use your camcorder as sort of a make shift night vision so you can navigate around which brings you to another rather large issue – battery life. The more you use the camcorder to see the faster the battery runs out, so you are now on two missions – stay alive and find more batteries. By the end of the first hour I knew there would be little sleep for me that night so I pushed on, deeper into the asylum, nervously awaiting the next crazed psychopath to lunge out after me.

This game makes you focus so much on every single sound around you so you can avoid what seems to be imminent death, that you forget your surroundings. Which is exactly what I did until my cat jumped up on my lap taking about 20 years off my life. If you are a fan of survival or horror games, or even just love a good old fashion scare from time to time then I highly recommend checking out Outlast on the Xbox One.

Outlast is available on Xbox One, PlayStation 4 and PC

Deadlight is a side scrolling survival horror game, that uses platforming and graphic novel like story telling that takes you into a post apocalyptic world set in Seattle in 1986 after a Zombie outbreak has occurred. Zombie games are nothing new but Deadlight is brilliant in it’s use of 2.5D graphics which utilizing shadows and tones in a way that really sets an eerie and desolate world.

Deadlight also sets the stakes by giving you limited ammo, you survive by utilizing traps and solving puzzles also while trying your best not to alert the many Zombies that litter your path. What makes Deadlight a great game to play for Halloween isn’t so much about it’s scare factor but about it’s overall tone. Its Dark, its desolate and builds upon moments of tension when trying to figure out how to get to the next area without becoming a meal for Zombies in the process.

Nothing celebrates Halloween more than Costume Quest and Costume Quest Two simply for the fact that you are literally dressing up for trick or treating in the game. In Costume Quest we meet Reynold and twin sister Wren who set out to get as much candy as possible around their neighborhood on Halloween night. At the start of the game you choose which of the twins to play as. Your playable character dresses as a robot and the non-playable sibling dresses as candy corn. This is where the games plot comes into play when your sibling is kidnapped by a monster, so begins your adventure and sets you on your way to rescue him/her and still be back in time for curfew.

In the quest to save your sibling you meet other neighborhood children some of whom will join your quest while others may give you tasks to complete along the way. Through out your adventure you collect materials which you then use to make new costumes. This is key because in your encounters with monsters you become giant versions of whichever costume you are wearing complete with attributes belonging to each costume type. Battles are turn based RPG style allowing players to select attacks, blocks and special moves.

Costume Quest 2 furthers the adventures of Reynold and Wren and their trick or treating misadventures. The sequel features new costumes, battle systems and a time travel-based plot line. This time around the twins and friends take on Dr. Orel White the maniacal dentists who wishes to see Halloween banished.

Dead Space released in 2008 and by that criteria I suppose you could say it’s a classic title at this point but don’t let it’s age sway you. In all honesty you would be hard pressed to find a game that does survival horror as well as Dead Space does. You take the role of Isaac Clarke the engineer on the Kellion a space vessel that is dispatched to investigate a distress signal sent out by the starship USG Ishimura. Once the crew arrives and begins to investigate the abandoned vessel they are all slaughtered by monsters called Necromorphs. These creatures have the ability to reanimate slaughtered corpses and are a fearsome foe that survivors Issac Clarke, Commander Zach Hammond and Computer Specialist Kendra Daniels will find themselves facing in the quest for survival.

As Isaac Clarke you will explore the the USG Ishimura making repairs to the vessel in hopes of survival and rescue by sending out a beacon to any nearby vessels. During this you will enter dark halls and rooms with out always knowing just how many Necromorphs may be laying in wait. You will solve puzzles, review audio logs and upgrade weapons all in the name of survival and tension is added by ammo being scarce. This makes for unparalleled tension and fear and what at times can feel like unsurmountable odds.

I can’t recommend Dead Space enough if your looking for the perfect game to turn the lights down the surround sound up and submerge yourself in a game that can really bring the scares and get the heart racing making this the perfect game to play for Halloween.

Dead Space is available for PS3, Xbox 360 and PC

Nothing says Halloween like a good haunted house filled with ghosts and when you can bring a charming character like Luigi into that mix you have the hallmarks for a winning combination.

In Luigi’s Mansion: Dark Moon players take control of Luigi and his Poltergeist 5000 a special vacuum like tool that Luigi uses to do a bit of ghostbusting. The main goal of the game is to find and suck up pieces of the shattered Dark Moon. The Dark Moon which is an object that has a pacifying effect on ghosts hangs above Evershade Valley, which is where the game takes place. The antagonist of the game King Boo shatters the Dark Moon which then makes the other ghosts in the valley become hostile and mischievous.

Queue Profesor E. Gadd who recruits Luigi to collect the pieces of the Dark Moon to try and bring order to the chaos that has ensued. Luigi who is of course reluctant in this tasks but sets off to search through the the five haunted mansions located in the game in an effort to reclaim the shattered Dark Moon. Luigi will tremble, shake and mumble to himself as he explores various rooms of the mansions facing off against ghosts and solving puzzles.

Luigi’s Mansion: Dark Moon is loaded with charm and you can find yourself getting lost in it what it has to offer. This is a great game anytime of the year to be sure but it is absolutely the perfect game for Halloween.

One of the best things to do around Halloween is to sit around and watch campy horror movies. Who doesn’t like yelling “don’t go in there” at the screen when a player decides to go into a dark room when they thought they saw something, or investigate the woods when they hear a sound. Well what if you could be the one checking out the ominous noise or more importantly making the decisions for those same characters on screen?

Until Dawn is a interactive game that puts you in control of a group of characters who have gathered at a mountain top ski lodge one year after the mysterious disappearance of 2 of their friends one year prior. As the player you make decisions through various QTE’s and button prompts all of which will push plot lines that trigger butterfly effects that will change the outcome of the story as you play.

The game is also the perfect Halloween game because you can sit around with a significant other or friends and together make some of the decisions and see how things play out all while getting the same scares as watching a horror movie. The great thing about Until Dawn is that that are a tremendous amount of outcomes based on the decisions you make as the game progresses which keeps replay value is incredibly high.

Be sure to check out the attached video review from The WorryWart who had great things to say about the game!

Until Dawn is available on PlayStation 4