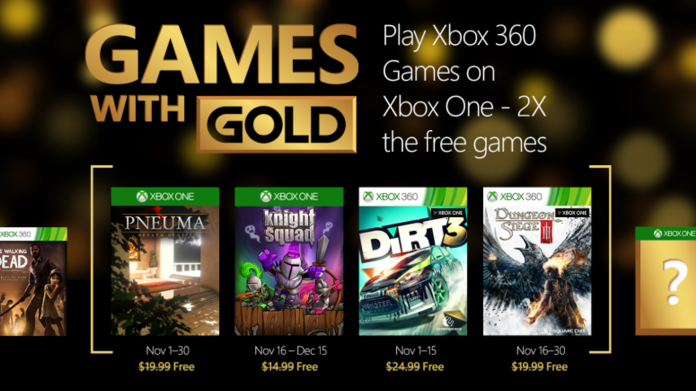 As we begin to bid October a fond farewell and prepare to usher in November let us also take a moment to observe the month’s new Xbox Live Games with Gold.

As a quick reminder beginning in November all future Games with Gold titles for Xbox 360 will be playable on Xbox One which essentially gives Xbox One owners double the games every month. Once Xbox One Backwards Compatibility begins on November 12th you will also be able to play multiplayer with your friends no matter which console they are on, which is an awesome feature for sure.

So without further delay here are your free Games with Gold for the month of November for Xbox Live Gold members as advised by Major Nelson:

Just a reminder you have until this Sunday to download October’s free Xbox Live Games with Gold titles. Take a look at the trailers below for your upcoming free games next month and let us know which ones you will be picking up.

*Titles are available as free downloads for qualifying Xbox Live Gold members in all markets where Xbox Live is available. Some regions may offer different titles depending on market availability.