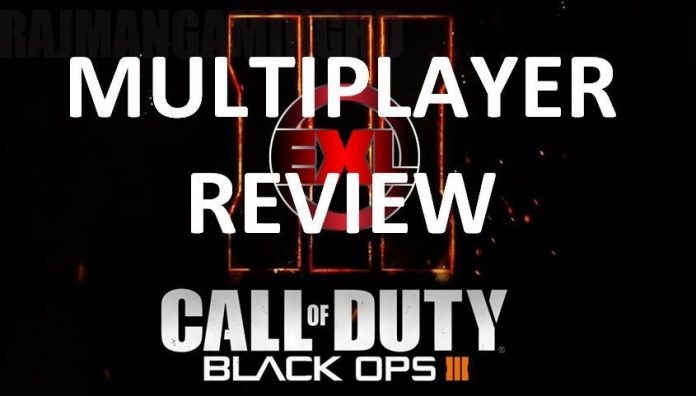 After a long three-year wait Treyarch are finally back with another Call of Duty.

Black Ops 3, to me, feels like Call of Duty again. Treyarch has somehow managed to create a synergy between the futuristic direction that the last two installments in the franchise were headed in and blend it in with that traditional ‘boots on the ground’ gameplay style that we have come to love and expect from Call of Duty.

Whilst there is still a large element of the multiplayer that is clearly steering you towards using the futuristic additions such as wall running and jet packs, you don’t have to. If you want the game to feel and play like traditional Black Ops then you are able to do so.

I think one of the key things to note that really helps the multiplayer stand out for me, is that you have the choice to play how you want and your decision to play one way or another does not put you at any disadvantage.

After slugging out a stupid number of hours in multiplayer I thought I would come back here and give you my impressions with a brief review to help you decide if Black Ops 3 is for you.

One of the biggest concerns I had (and no doubt you had) was that the addition of jet packs was going to make the movement system feel like Advanced Warfare (AW). I enjoyed AW because it was different, fast and challenging, however it’s not my preferred style of Call of Duty. So coming into Black Ops 3 I really wanted to find that the jet packs added to the experience, not change it completely, and thankfully they are a welcomed addition.

The knee slide and wall running somehow just work really well, it allows you to string together different moves to create a perpetual train of momentum. You never lose your ability to fire your weapon or use tactical and lethal items.

At the same time though, if you choose not to use these additional movement features you are not at any disadvantage, regardless of if you are in the air or on the ground it still takes the same amount of time to raise your weapon, aim and shoot.

You have that flexibility without there being any downfall to your decision, it all comes down to your own reaction time and accuracy (and of course your connection).

You can’t help but get a sense that this is an evolution of the gameplay style from Black Ops 2, almost like its potential was realized and brought into fruition. The Pick 10 model from Black Ops 2 has returned. For those who are not familiar with this it’s as easy as deciding exactly what weapons and attachments you want, lethal, tactical and perks etc., until you have a total of up to 10.

Some items require you to be a very high level to unlock though, such as the combat knife which unlocks at level 40, and one of my favorite perks which is Ghost is also at the end of the road.

While I think this is great for those who play Black Ops 3 often as you won’t max out your prestige levels too quickly, I also think that it will become a very onerous task for those who don’t have the free time to play on a regular basis.

If you can only put in 2-3 hours on a weekend you will find this to become very frustrating as you will have to choose class set ups based only on what you have available to you, not how you would normally play.

The flip side is that it’s not really that crucial if you are a casual Call of Duty player as the items that you do have available to you are more than enough. We now have a completely new way to customize weapons. There is little to no restriction on what you can create beyond the 64 layer limit (which is massive compared to previous emblem creators) and your own imagination.

If you are not the creative type, or simply don’t care for that sort of thing, there is a range of pre-set camos for you to choose from, so yet again, there is something for everyone.

The Gunsmith is where you design weapons for both multiplayer and campaign, and you can also play around with adding different sights and attachments, and apply your paint job to check out your creation before selecting that as your weapon to take out on the field.

This is a place in the game where you can waste a ridiculous amount of time customizing everything to be exactly how you want it.

When designing your weapon you will see that there are several ‘Classified’ items that you cannot unlock from there, they are acquired through Supply Drops which you buy in the Black Market (we will get into that below). So as you play along you will ultimately end up receiving new pre-set camos that you can test out.

I think this is a very well thought out addition to the game which provides you with even more ways to play the way you want. I wasn’t entirely sure how I felt about this concept as it seemed like adding an awful lot of variation and choices into the mix, but it actually allows you to really choose a specialist that not only suits your gameplay style but also the game modes you are playing. What you may feel like you are loosing by only having 10 slots in your Create a Class is made up for by the various weapons and abilities that each specialist comes with. It does feel a bit like someone had played too much Destiny during development, but it works surprisingly well.

Basically you have 9 different specialists you can choose from, each with two different abilities. You can also rank up these specialists as you progress giving you another aspect of the game to focus on instead of just grinding through prestiges.

You can also unlock different gestures and armor for your specialists which is just another layer customization which I think the players will really appreciate.

Whilst initially the powers each specialist has may seem extremely over powered, as you play on you begin to realize that when using your specialist ability you are no more over powered than any other player using their ability. They are all well-balanced to each other and can in fact defuse one another. So don’t just use your ability every time it powers up, hold onto it as it may save your life when being attack by a supped-up opponent.

It would be nice to be able to choose which specialist goes with what ability/weapon though. This is where you can feel more of that Black Ops 2 vibe returning to the game. The maps are all relatively medium-sized which allows for you to take advantage of the new movement system, however unlike AW you are not having to worry about opponents stalking you from high vantage points. The jet packs don’t allow for you to get as high as AW did so you are not disadvantaged if you choose to play the traditional way with your feet on the ground.

Although you may not have to worry about what’s in the air as much anymore, you do need to worry about what might be below you. The new underwater combat system is fantastic. You use the water areas of the map to transport quickly to another area but not necessarily safely, as you can fire and melee whilst swimming. This is one of my favorite additions to map layouts in Black Ops.

Visually the maps are stunning, the attention to detail is superb. The Theater mode allows for you to take a tour of these maps without bullets whizzing past your head so you can really appreciate what a work of art they are. We have all become quite familiar with Supply Drops thanks to AW, even if you haven’t played that installment in the franchise you would still be familiar with the concept.

This has been brought over to Black Ops 3 but with a few twists.

To buy your Supply Drops you need to earn Crypokeys, which is the new in-game currency. At this stage you have two options available to you:

The Rare Drops are considerably more expensive, however it does give you the guarantee of getting at least one Rare item in that drop.

The Cryptokeys can take a while to earn though as, depending on your score, you will typically earn 1 per game. This makes accumulating enough for another Supply Drop a very slow process.

I believe this is not only intentional, but cleverly done to create an appetite for Cryptokeys effectively setting us up for a microtransaction system to be implemented down the track.

The great thing about this though, and the main reason I am not concerned by the potential for microtransactions to be added, is that all the items you get from the Black Market are purely cosmetic. Items such as taunts for your specialist, gun camos, calling cards, specialist gear, all these things are just for your own personal customization. The Theater Mode has returned, much to our delight.

The past two installments in the franchise have not had a Theater Mode added to the features, however Treyarch has done an amazing job of listening to community feedback and this is one of the most requested additions so naturally they made sure they added it.

The controls are very easy to use and allow you to remove the HUD when exploring your saved clips, and the social sharing options are very user friendly. There is a lot more that I could go on about however those are the key elements of the multiplayer gameplay that I think will aid you in making a decision about purchasing this game.

This is the first 3 year cycle in development of a Call of Duty game and it clearly shows. This does not feel like a copy and paste, it doesn’t feel rushed out the door and it DOES feel like it belongs on current gen consoles.

I’ve said it before and I’ll say it again, no one does Call of Duty like Treyarch.