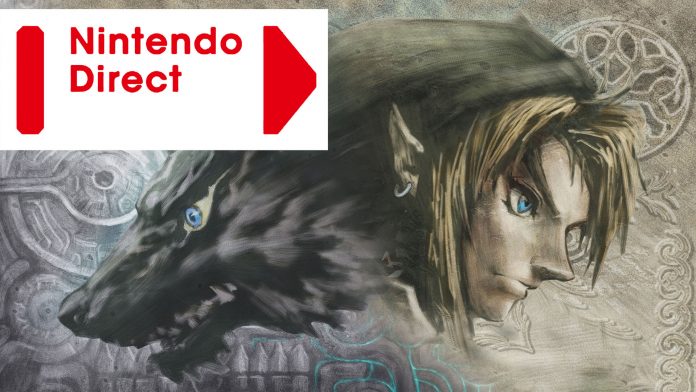 Nintendo held it’s first Nintendo Direct today since the unfortunate passing of President and CEO Satoru Iwata. Here are the highlights of the event and there were some great and interesting announcements to be sure. So without further delay let’s dive right in….

The famed Gamecube and Wii title The Legend of Zelda Twilight Princess will be receiving an HD makeover for Wii U and will release on March 4, 2016.  Nintendo also revealed a new Wolf Link amiibo, which will release alongside the HD remake of the game and will also be a part of a special bundle. It was also announced that the game will include the official soundtrack as a pre-order bonus. Nintendo also says that data saved on the Wolf Link amiibo will transfer over to Legend of Zelda for Wii U.

The Legend of Zelda: Tri-Force Heroes

Nintendo announced at todays Direct that the newly released The Legend of Zelda: Tri-Force Heroes will be receiving a free new update on December 2nd. This update will be called Den of Trials and contains a new area with a massive 30 stages and 2 new outfits.

According to Nintendo Splatter will see continued support with free DLC until January 2016. It was announced that these updates will include new maps, gear a gameplay changes that should tweak the balance. New content will be rolling out as early as today at 5PM/PT and will include 40 new pieces of gear. There are also 2 new maps heading to the shooter, Museum D’Alfonso and Mahi-Mahi resort will be available tomorrow at 6:00 PM/PT.

Nintendo has announced that Star Fox Zero will be available on April 22, 2016 for Wii U. The game was originally scheduled to release this year but was delayed back in September to give the team “more time to work on areas such as the unprecedented discovery that we want players to experience in the game by using two screens, and further polishing the level designs and perfecting the tone of the cut scenes.”

A new Wii U bundle

There is an all new bundle being released for the Wii U for the upcoming holiday’s that will include a 32GB Wii U console along with Smash Bros and Splatoon.

A Collector’s Edition of Final Fantasy Explorers will be released along side the standard retail edition on January 26th. The Collector’s Edition will include a soundtrack with 20 songs, a hard case for the 3DS, an art book and exclusive in game quests.

Nintendo also announced that fans of Pokemon will soon be able to pick up Pokemon Blue, Pokemon Red and Pokemon Yellow on the 3DS eShop as digital downloads. The 3 titles will be presented in their on their original states, exactly the way they shipped on Game Boy many years ago at retail. The only change will be the exemption of trading via the Game Boy Link Cable which of course has been replaced with wireless trading via the 3DS’s wireless capability.

All three games will release on February 27, 2016 which marks 20 years to the day that Pokemon Red and Blue originally released in Japan in 1996.

The Legend of Zelda: Hyrule Warriors was a surprise success for Nintendo’s Wii U last year by mixing the Dynasty Warriors franchise with characters we all know from the beloved Zelda series. Nintendo hopes to achieve that same success on its popular portable console the 3DS with the release of The Legend of Zelda: Hyrule Warriors Legends on March 25, 2016.

A collaboration between The Pokémon Company and BANDAI Namco Entertainment Inc., Pokkén Tournament is a new fighting game for Wii U that lets players use their favorite Pokémon characters to battle it out in fighting arenas. Fans who purchase a first-run version of the game at retail stores will receive a limited-edition Shadow Mewtwo amiibo card that immediately unlocks the character in the game after tapping it to the GamePad. Pokkén Tournament launches exclusively for Wii U in spring 2016 at a suggested retail price of $59.99.

A New Challenger Approaches! As Cloud Strife, the legendary protagonist from the classic RPG game FINAL FANTASY VII, will enter the battlefield as a playable fighter in Super Smash Bros. for Wii U and Super Smash Bros. for Nintendo 3DS in the future. A special video presentation will be released in December, which will share more updates about the hit fighting games.

On Nov. 20, Mario Tennis: Ultra Smash launches exclusively for Wii U at a suggested price of $49.99. The game includes a fun New Super Mario Bros. power-up, the Mega Mushroom, which is featured in the over-the-top “Mega Battle Mode.” Players can also select “Classic Mode” to enjoy a more traditional game of tennis. Players can compete online or together via local play, and the game is compatible with amiibo in select modes, including online matches.

Massive RPG Xenoblade Chronicles X launches exclusively for Wii U on Dec. 4 at a suggested retail price of $59.99. For people who purchase the physical version of the game, four free high-speed data loading packs are available to download from the Nintendo eShop starting today. The data packs greatly increase the speed of loading times in the game, but are not required to play.

The hilarious Mario & Luigi series meets the charming Paper Mario series in the Mario & Luigi: Paper Jam game, launching exclusively for Nintendo 3DS on Jan. 22 at a suggested retail price of $39.99. Using compatible amiibo, players can create a corresponding character card in the game, which has powerful effects during battle.

There are multiple adventures waiting to be experienced in Fire Emblem Fates for Nintendo 3DS. By purchasing one of the two main games at a suggested retail price of $39.99 – Fire Emblem Fates: Birthright or Fire Emblem Fates: Conquest – either at retail locations or in the Nintendo eShop starting Feb. 19, players choose to embark on a unique quest with a different story and different experiences. The decision that the player makes early in the game will dictate the game’s story and difficulty. After purchasing one game, the downloadable version of the other is only $19.99 via an in-game purchase.

There will even be a third downloadable version in the near future, Fire Emblem Fates: Revelation, for players who own either Fire Emblem Fates: Birthright or Fire Emblem Fates: Conquest and want to take on a new challenge and experience an alternative version of the game. For fans of the series, a special edition will be available that includes all three games, an artbook and a Nintendo 3DS XL pouch at a suggested retail price of $79.99.