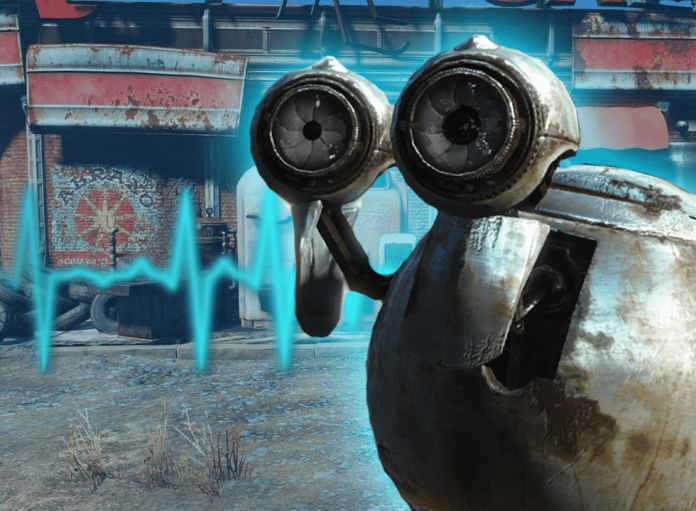 Codsworth. The unique Mr. Handy robot in Fallout 4 is leaps and bounds ahead of his predecessors in Fallout 3 and even Fallout: New Vegas – and we’re not talking weaponry here, but personality. In a blog post by Bethesda Global Content Lead Gary Steinman, the voice actor for the lovable robot, Stephen Russell, discussed his work in bringing steel to life for Fallout 4. “I was best off voicing him if I would treat him as any other sentient being capable of joy and frustration, pleasure and pain, affection, anger, exhilaration, exhaustion,” Russell says. “He has a lot of heart.”

But, it takes more than just heart to make an emotional connection in a visual media like video games. Bethesda Senior Character Artist Dennis Mejillones stressed the importance of Codsworth’s eyes during player interactions in Fallout 4. The tipping point, according to Mejillones, was the addition of irises. “The moment it started opening and closing and focusing on you, it immediately added all this character,” he says. Previous Mr. Handy models had dull, non-animated eyes, which hindered their ability to be personified.”Bigger doe eyes give you the sense of something more cute,” Mejillones says. “The smaller the eyes, the scarier things tend to be, especially with machinery. It’s very predatory.”

This attention to detail helps Codsworth’s eyes relay his emotions perfectly. In the blog post, Steinman notes Codsworth’s eyes are made even more important due to the fact the robot has no mouth. The animation team also worked on animations for the individual eye pods, in an effort to make the robot appear more friendly and emotional.

Looks aside, many Fallout 4 players were probably delighted to see Codsworth is capable of quite a few emotions. In fact, he even has emotional baggage. “You also get the sense he has a definite worldview and code of ethics that may have evolved beyond what was programmed into him. He’s really a very strong character,” Russell says. “There’s a great amount of pride in this character, in the best sense of that word. He takes his work very seriously, and his devotion and commitment to the family is unswerving.”

Codsworth likely even knows how to say your name, whether it’s Frank, Stella, or even “Orgasmo.” When Codsworth addresses you by name, it leaves an impact. “It made me feel not only connected to the game as a player, but made me feel really connected to my baby, my creation,” Mejillones says.

What do you think of Codsworth as a companion in Fallout 4? For Mejillones, he’s the only choice. “The moment I can get him as my companion, he’s my companion,” he says. “Because when I’m getting my ass kicked and he comes in with flamethrowers and saws, and he saves me, I’m like: You saved your daddy. He criticizes some of my actions. We don’t agree on everything. But it’s all good. I can live with that.”

If you haven’t played Fallout 4 yet, or just want to see the emotion I’m talking about, check out the video below.