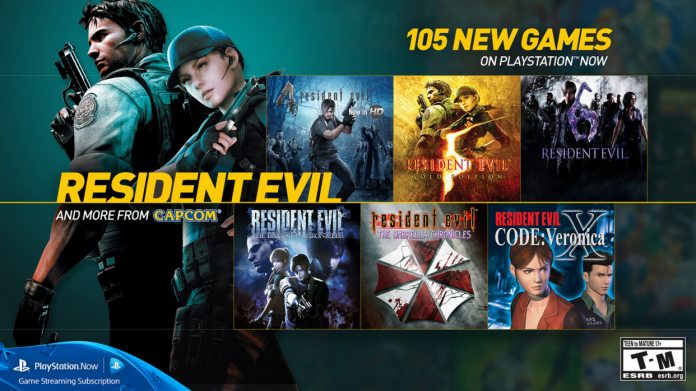 PlayStation Now is about to have a bit of a growth spurt with Sony’s cloud-based streaming service set to add over 100 new titles which brings the count to over 250 games.

according to PlayStation blog publisher Capcom will be adding titles from its top franchises such as Resident Evil, Street Fighter, Lost Planet and Mega Man, 21 titles in general. If you would like to start a 7-day free trial be sure to check here.

Here is a sampling of titles that will be available:

The bioterrorism nightmare is more chilling than ever, as outbreaks in America, Europe, and China threaten to plunge the world into chaos. Multiple heroes will rise to meet the threat of this new viral outbreak. (Rated Mature)

Six years after the destruction of Raccoon City, Leon Kennedy is sent on a secret rescue mission to Europe to rescue the president’s daughter. During the search, Leon realizes the nightmare has not yet ended. (Rated Teen)

One of the most revered and sophisticated fighting games of all time takes the battle online. Throw down with enhanced HD-filtered graphics, arcade-perfect gameplay and more. It’s the third strike that counts. (Rated Teen)

The original MMA series is back, dressed to kill with a whole new look and improved fighting system. Play the original Turbo mode to revisit old-school gameplay or the Remixed mode for exciting new techniques. (Rated Teen)

The classic Blue Bomber is back with the ninth installment in the classic series. It’s a new adventure for Mega Man all done in an 8-bit style — graphics, music, and gameplay are all like you remember them! (Rated Everyone)

Play as Chuck Green, a father dedicated to the safety of his daughter as he tries to escape Fortune City. Armed only with his wits and duct tape, Chuck must build deadly new weapons to dispatch an undead horde. (Rated Mature)

Return to the troubled world of E.D.N. III, a planet torn apart by the battle for precious thermal energy. Pilot new Vital Suits and unleash an arsenal of new weapons against a host of massive new enemies. (Rated Teen)

Shooting action reaches new heights as you try to thwart a devious plan to terminate all life on E.D.N. III. Battle dangerous enemies for precious thermal energy while you desperately search for the truth. (Rated Teen)