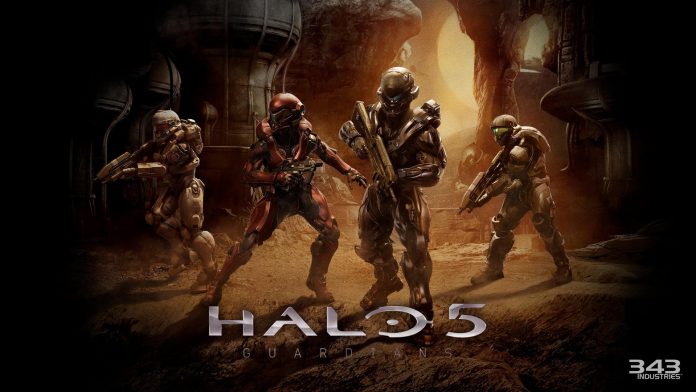 HALO. Say the name and everyone involved with games and gaming, and quite a few people who aren’t, instantly know something about the game. Whether it’s Master Chief and Cortana, or the Covenant and the Flood; HALO has been, and is one of the biggest franchises in the video game industry.

Once again Master Chief and the Covenant have graced us with their presence in the recently released Halo 5: Guardians. Now, before I begin let me say that I’m a huge fan of this universe and as such this is all the opinion of a hopeless nerd who was clinging to his Master Chief jammie’s as I hit the start button on my controller!

A big launch is a staple of the Halo games. Microsoft always pulls out all the stops and this games launch was no different. After all the smoke cleared Halo 5 generated a massive amount of sales for Microsoft and the franchise. Whether or not it was special edition consoles and controllers, or the actual physical/digital game (all bearing the name Halo mind you) the game and the franchise is still a huge part of gaming culture and one of the most successful first party titles that anyone has.

Now with that out of the way I thought as a longtime fan of the series and an avid reader of the fiction I’d discuss what I felt worked and what I felt needs some tweaking (notice I didn’t say what didn’t work? Hey! I’m a fan!). The universe that has been built up over the years, not only in the games but also the fiction, has cemented Halo as a franchise with countless characters and stories to be told as well as numerous opportunities that I feel more recently with Halo 5 have been explored and hopefully will be expanded upon in future titles.

When I first heard about Blue Team I was very excited! Of course I was intimately aware of who each member was due to the fiction, but I was excited to see how 343 Industries would incorporate them into a mainline Halo game. Would I hear about Chief’s relationship with them when he was a child? Would I get a bit of backstory on each member and how they relate to one another? In the end, if you’ve never read any of the fiction, Blue Team just sort of ‘shows up’. It’s clear they all love and respect one another. It’s clear they all follow Chief’s lead. What isn’t clear though is why? Other than a brief cut-scene where we learn that they’ve completed more missions than most other teams and that they formed a bond like ‘family’ – that’s it!

Now I’m sure when a universe is as vast and complete as Halo is that the videos and the novels all serve to add to the backstory, and I’m sure 343 Industries knows this but with the introduction of key team members I feel it was a missed opportunity to ‘build out’ ‘the fiction for fans who’ve only played the games.

Team OSIRIS is another example. They’re just there? Out of the blue. Who is Olympia Vale? Why is she important? What motivates Locke beyond just “Go get Chief”? I’m sure it must be difficult with this many characters to expound upon all of them but maybe the size and scope of the Halo universe is too big for one game to include so many important characters. A narrower focus on the 2 central characters would have been more precise. Scope is something that Halo has always had in surplus and once again Halo 5 does not disappoint! When you visit a particular planet, I won’t spoil it for you, and move from the interior to the exterior of that world you will be struck with just how open and vast the game can be. It’s reminiscent of stepping out of the escape pod in Halo Combat Evolved and realizing you are literally on another world. A world full of rich detail and its own unique flora and fauna; Halo has always made the details of its universe unique and varied.

Gameplay was paramount from the outset for 343 Industries and a solid 60 FPS was the target from the earliest announcement. Halo 5 is so fast and fluid that I almost immediately noticed the difference from playing the last game in the series. It’s the right choice for the right style of game and gameplay.

Graphically everything works to serve the whole. There isn’t one graphical effect you’ll hang your hat on but rather an evolution of the engine and the effects work that all again work to serve the entire package in a way that feels absolutely correct.

Is it perfect? No.

Is it a leap beyond what past Halo games have presented to fans of the series? Yes.

In the end, if you are a fan of the Halo franchise you’ll likely find Halo 5 is an absolutely worthy addition to the series and perhaps feel that inevitably the series will change, ever so slightly, based on this games story and how it’s presented. Halo is a huge universe, one that Microsoft sees as big as Star Wars and who’s to say that we won’t see much more of these characters; whether it’s in this trilogy or individually in side games.

One thing is for sure though, Halo lives on!

With that being said, take a look inside the world of Halo 5: Guardians and tell me what you think.