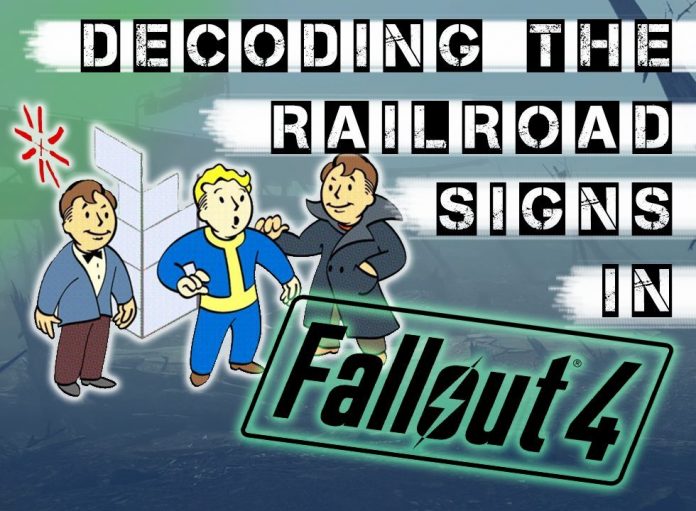 If you have just started Fallout 4, you should prepare to spend a lot of time in-game. If you haven’t, you should also prepare before starting the game. Do a little research on character builds and know what the important materials in game are going to be. This will help make your experience that much more enjoyable, because you won’t be spending a lot of time fixing the mistakes many players make in the first few hours of the game. One thing to know before you venture out into the post-apocalyptic Commonwealth, is what to expect from the various and seemingly random graffiti markings on buildings, mailboxes, and everything in-between. Very minor spoilers follow.

The markings are testaments to The Railroad, an organization in Fallout 4 that functions much like the Underground Railroad from back when slavery was legal in parts of the United States (it helped slaves escape from The South). The Railroad of 2077, however is tasked with helping Synths (synthetic humans) escape The Institute (a shadowy group harassing, kidnapping, and murdering Commonwealth dwellers). Some synths are indistinguishable from humans and act like their fully-fleshed counterparts. Unfortunately, The Institute itself views them as property – machines – and sometimes Synths feel differently. Not all Synths in Fallout 4 are bad, and you can help them by joining The Railroad.

The Railroad can also help you. Aside from teaching you how to mod underclothes (like the Vault Suit or Military Fatigues), the Railroad has a unique underground intelligence movement across the Commonwealth, and they use graffiti to help fellow agents. Symbols can be found throughout Boston and can indicate what’s up ahead – giving you time to prepare for an attack or even providing you with directions to weapons and ammunition. The video below provides details on each of the six symbols used, and what to expect when you encounter them.

If you’re unable to view the video. Here’s what to expect:

Plus (+) sign: An ally of The Railroad lies ahead.

A square sign: A Railroad supply cache is nearby. Search the area carefully. They are normally well-hidden, and contain items like weapons and ammunition.

An (x) sign: Danger ahead. Be prepared to encounter enemies. Many enemies marked in this way are particularly tough or numerous.

A safehouse sign: A Railroad safehouse is ahead. Inside, you will find supplies and perhaps even someone to barter with.

A dead drop sign: A dead drop lies ahead. These are often hidden well, just like caches, to prevent the important information within away from prying eyes. Knowing these graffiti markings (and not getting the “ally” and “danger” signs mixed up, as I often do) is a useful skill for any Lone Wanderer. I wish I had known about them sooner. I’ve only recently begun my quests with The Railroad, but is an interesting storyline so far, and one I would recommend to players.

Did you decide to help The Railroad in Fallout 4? Let us know in the comments.