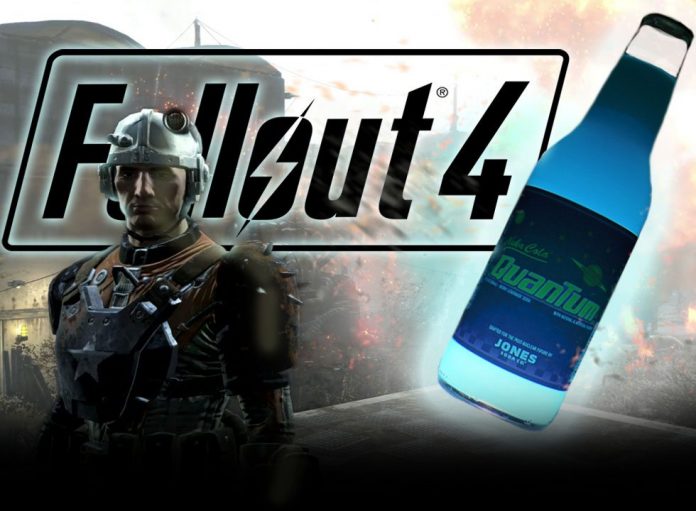 It’s 7:55 a.m. – I’m in the car and headed to Target in an effort to snag a couple bottles of the most sought-after beverage this holiday season (aside from alcohol, anyway), Fallout 4‘s Nuka Cola Quantum. I’m excited, just as much as I was when my mom would drive twelve-year-old me to the game store to purchase a pack of Pokemon cards. “Wow, stop acting like a child,” I tell myself, “You shouldn’t be this excited.”

Last week, Fallout 4 developer Bethesda and Jones Soda Co. announced they would be restocking supplies of Nuka Cola Quantum across the U.S. – which was welcome news for those of us who were unable to get a bottle from the first batch. That initial release was fraught with issues – some Target stores reportedly allowed entire stocks to be bought up by single people, some Target employees allegedly purchased entire stocks, and pretty much all of it ended up online. Single bottles on eBay are currently retailing at a solid $40. With the second batch, things were supposed to be a little bit different. Target reportedly placed a limit of two bottles per-person on the new stock (though employees at my local target seemed unaware of this).

I arrive at Target at 8 a.m., approaching the door just as the gentleman unlocks it for business hours. As I enter, I make a beeline for the electronic’s section, where I hope I’ll find the precious berry-lemonade cola concoction. The drink is not located on the store floor, where it is supposed to be, and I suffer a mild panic attack. “Where is it?” I demand in my head, “Please don’t tell me I missed it again.” I ask the employee behind the service counter if he knows where it might be. After a few tense moments, he heads to the warehouse area of the store and emerges with a large case of sky-blue beverages.

“I’m glad you’re here for this,” he says, “I had forgotten we had it in stock, I didn’t get one the first time.” I smile. “Me either,” I say.  After a brief, pleasant conversation, I collect my two bottles and head for the door. Just then, a woman rounds the corner by the toy aisle, makes eye contact with my bag, and fearfully asks “Did you get the last two?” I replied “Nope, there’s still several at the desk.” She lets out a victorious yell and dashes to the service counter.

“Well,” I tell myself, “At least you’re not the only adult excited about a silly drink.” I tuck the Nuka Cola Quantum safely in my car and finish the drive to work. It’ll have to wait until lunch. When the noon hour rolls around, I finally have my opportunity. Before opening, I examine the bottle, appreciating small design touches like the Quantum logo, the words “crafted for the post-nuclear future by Jones Soda Co.” and the “Save Your Caps” campaign, which allows you to trade caps for items in true Fallout 4-style. I realize it’s all a marketing gimmick, but I’m having fun. “Berry lemonade soda,” the label reads. I pause. I’m familiar with Jones soda, and I’ve had this flavor before. I had hoped that perhaps Nuka Cola Quantum would be an entirely new flavor of soda – something special, but it’s one I know well.

I open the bottle, listen to the fizz, smell the berry aroma dancing from the mouth of the bottle (you have to realize I paid $3 a bottle for this, I will get my money’s worth), and tilt the bottle to my mouth. It’s tart and tangy, somewhat reminiscent of blue raspberry cotton candy. There’s plenty of carbonation. It’s sweet, but not sickly-sweet like some sodas. The color is also appealing. Overall, it’s a genuinely pleasant experience – and one free of radiation poisoning.

As I finish the bottle, I’m struck by the realization that although I have had this flavor before, this time it’s different. Maybe it’s the result of a clever marketing campaign, or my inner Fallout fanboy, but there is something distinctly different about consuming a bottle of real-life Nuka Cola Quantum. It brings you one step closer, though as close as you may want to get, to the world of Fallout 4.

You can check your local Target’s stock of Nuka Cola Quantum here.

If you’re unable to find any and still want the same effect or want to make a holiday gift for a fan, consider making and printing your own Nuka Cola labels (it’s not difficult to do). You can find regular Berry Lemonade soda at retailers like Target and Wal-Mart, and you can even purchase it online from Jones Soda Co. – It won’t have the same packaging as Nuka Cola Quantum, but it’s the same drink.