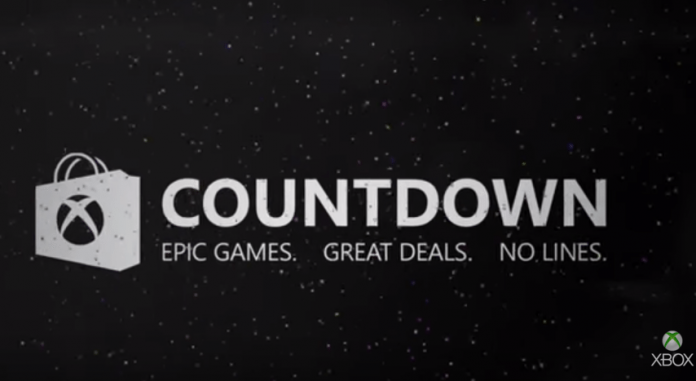 Xbox is getting ready for it’s biggest sale so far in 2015 called Countdown.

Spanning over 17 days, Countdown will include discounts of on average between 40 – 60% off, with some sales exceeding the 60% mark. Xbox Live Gold members can look forward to an additional 10% off their purchase prices as well.

Items for sale include games, TV shows, movies and applications with daily/weekly highlighted sales to celebrate the countdown to the New Year.

For the first time ever, all Xbox fans can get great deals on the greatest games lineup – Halo 5: Guardians, Rise of the Tomb Raider, Forza Motorsport 6, Gears of War: Ultimate Edition, and Rare Replay – plus, join Xbox Live Rewards to earn rewards credits. In addition, there will be deals on a variety of blockbuster titles such as Fallout 4, Call of Duty: Black Ops III, Assassin’s Creed Syndicate and more. Xbox One owners can take advantage of discounts on more than 10 Backward Compatibility games offered during the sale.

The sale includes deals for both Xbox One and Xbox 360, with up to 40 to 60 percent off, and some deals even more than 60 percent off. Xbox Live Gold members will save up to an additional 10 percent on top of the game discounts, so now is a great time to go Gold and reap the benefits.

Plus, there will be deals on hit Movies & TV shows such as Mission: Impossible – Rogue Nation, Kingsman: The Secret Service, Mad Max: Fury Road, Archer seasons one through five, and hundreds more. During the sale, Apps such as Sling TV, Crunchyroll and CBS All Access are all offering exclusive one-month free trials.

With Xbox One console bundles available for $50 off, starting at $299 through Dec. 26, and more great game discounts on the way, there’s never been a better time to pick up an Xbox One.

Major Nelson will be tweeting the latest additions to the sales line up, so be sure to keep an eye on his Twitter account or check back in on the Countdown sale via Xbox.com from the 22nd of December onwards.