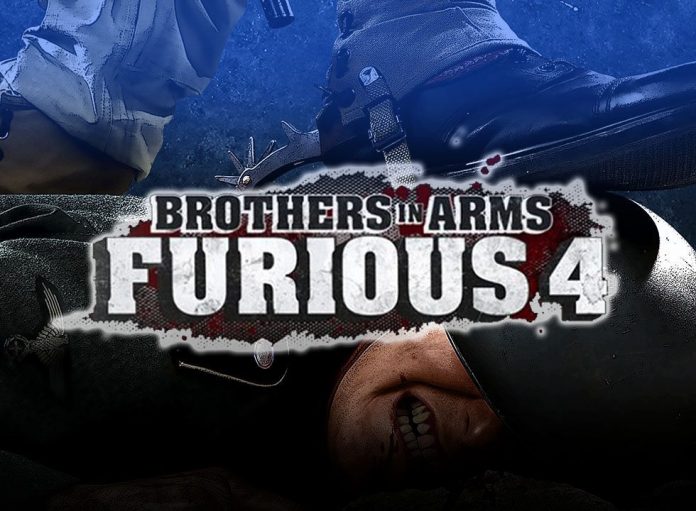 The World War II Brothers in Arms video game franchise is well-loved by a large fan base, so when Gearbox Software announced Brothers in Arms: Furious 4 at E3 back in 2011, reactions were mixed. The new game was not what die-hard fans expected – it was an over-the-top romp, reminiscent more of Inglorious Basterds, than Saving Private Ryan. This was problematic, since the Brothers in Arms franchise is rooted in retelling one of the most horrifying wars history has seen with uncensored, gritty realism.

In the most recent installment of the series, Brothers in Arms: Hell’s Highway, the player takes on the role of Staff Sergeant Matt Baker of the U.S. 101st Airborne Division. Baker has to learn to cope with the loss of men under his command who die from his decisions. It’s tremendously stressful. Baker is often a victim of “Murphy’s Law,” where everything that can go wrong, does – and he doesn’t take it well. By the end of Hell’s Highway, the shell-shocked staff sergeant is overcome by his personal demons, some of which even manifest as hallucinations. Things don’t look good at the close of the game, and a voice from Baker’s past whispers the allusion “You’ve made it through Hell, how do you feel about snow?”

Bastogne. The name is synonymous with the 101st Airborne Division. It was one of their many shining moments. Encircled by German troops in the winter of 1944, American paratroopers held their position tooth and nail in the Belgian city and forest nearby. Shelled daily by enemy artillery, and improperly clothed for the siege, elements of the 101st refused to budge. Even when faced with total annihilation and a demand to surrender by German General von Lüttwitz, American troops gave a defiant response, embodied by Brigadier General Anthony McAuliffe’s one word response to the German general’s request: “NUTS!”

With the announcement of a new Brothers in Arms game, everyone was expecting Bastogne. The battle plays a centerpiece in the critically-acclaimed Band of Brothers series from HBO. It holds a solid place in World War II history and popular culture. The game announced by Gearbox was not Bastogne. In fact, it was quite the opposite. Check out the original trailer below.

The characters were certainly interesting. Chok, Montana, Crockett, and Stitch all had interesting personalities, but Furious 4 was not, in the hearts and minds of fans, a Brothers in Arms game.

A long time ago, I did a Youtube video on the announcement of Brothers in Arms: Furious 4, after its reveal at E3. I talked about what the game could be, where it could go, and what to expect. I was floored by the response. With over 350,000 views and 1,000+ comments (and lots of dislikes for some reason), it provided a clear picture on the impressions of the series’ fanbase. It became obvious I was not alone. Comments like “WTF why would they do this?” and “I’m still hoping for the bastogne campaign” litter the comments section. Gearbox certainly took notice. Over the coming months, Gearbox made the decision to remove the Brothers in Arms name from Furious 4. This appeared to satiate some fans, but many remained unhappy. I had confidence in Gearbox’s abilities since Borderlands was (and remains) one of my favorite games of the last generation of consoles. I had also been hoping for a game mashing the cooperative and quirky gameplay of Borderlands with the World War II genre. It appeared Furious 4 might be that game. Until it wasn’t. Time continued to pass with no update from Gearbox. The original release date was in 2012, which came and went. No official in-game footage was ever officially released. We saw a few screenshots here and there. Gearbox Senior FX Artist Nick Peterson did put out a demo reel showcasing some in-game footage, but Gearbox said nothing. Silence, in terms of video game development, is generally not a good thing. What happened behind the curtain of development secrecy may never come to light, but here’s what we do know: In September of 2012, Gearbox CEO Randy Pitchford said in an interview that Brothers in Arms: Furious 4 would become a new Intellectual Property (IP) and would undergo drastic changes. “Okay,” I thought, “as long as it’s still set in World War II.” In July 2014, Battleborn was announced, and we saw a familiar character: Montana. He was almost unrecognizable – distorted into a cartoony hulk of a person. I was unsure if this meant Furious 4′s demise, or was some attempt at cross-game promotion and synergy. Based on the character’s redesign, I leaned to the former option. Furious 4 had to be dead. But was it?

In July of 2015, Pitchford confirmed my suspicions, announcing “Furious 4 is not a thing anymore” at a conference. He also indicated that the game had evolved into Battleborn during creative development. Battleborn is an interesting concept. It’s focused on multiplayer and cooperative gameplay, and also integrates several features seen in Borderlands. The universe is interesting, too. Characters and environments are varied, and the combat looks solid. I had the fortunate opportunity to participate in the Battleborn Closed Technical Test, but sadly I am limited by a non-disclosure agreement and can’t discuss the details. I will say however, that Gearbox’s original vision for Furious 4 would probably have worked, based on my experiences with Battleborn. Check out the latest trailer for Battleborn below:

The game that is Furious 4/Battleborn has been in development in some form for nearly six years (assuming that significant work was done before the original Furious 4 trailer dropped in 2011). Hopefully that time was put to good use and Gearbox has another Borderlands-caliber game releasing May 3, 2016. You can learn more about Battleborn at the game’s official website. And for those of you (like myself), still waiting for the next Brothers in Arms game, all hope is not lost – Pitchford has indicated in subsequent interviews that a true-to-form sequel to Brothers in Arms: Hell’s Highway is in the works, though it is still in the early stages. Here’s to hoping we don’t have to wait another six years to see it.

What do you think of Battleborn? The decision to cancel Furious 4? Let us know in the comments.