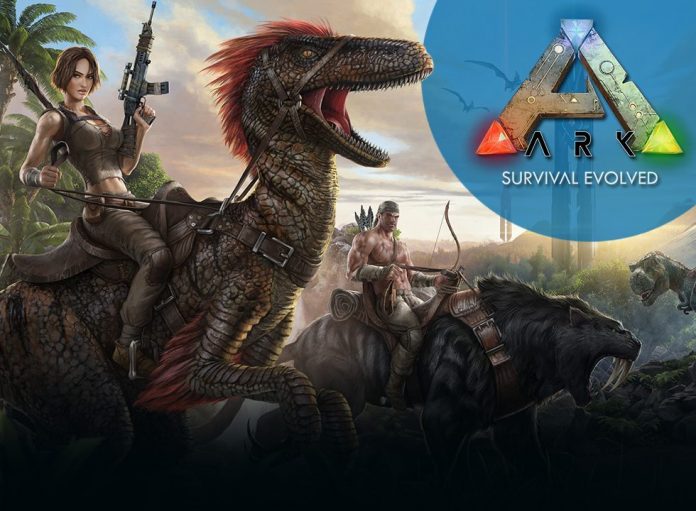 Ark: Survival Evolved has been a head trip from the day it was announced.

Dinosaurs, crafting, cooperative and PVP/PVE gameplay. The game resembled an interesting mashup of Turok and Minecraft. But what would the actual experience be like? Well, I have returned from the jungles, woodlands, and mountains of the Ark to tell you of my experiences. If you’re unfamiliar with the game, check out the trailer below to learn what Ark is all about.

It would be easy to pigeon-hole Ark: Survival Evolved into the same category of game as Minecraft, but it wouldn’t be a fair comparison. There are similarities, sure. But the overall feel of the game is different. Just as in Minecraft, the player must collect resources and craft items to survive, but it is taken to a whole new level in Ark. In Minecraft you’re limited to bows and swords for weapons, and you’re able to saddle a horse and ride it. In Ark, the sky is the limit. You’re able to build complex weapons like shotguns, and you have an entire ecosystem of animals to fight and tame. You want to tame a Tyrannosaurus Rex and put a saddle on it? You can do that. It will take a while, but you can do it. With the way Ark is set up, you start in what equates to the Stone Age – you’re foraging for food, crafting clothing and weapons to keep warm, and building a humble thatch house. As you craft, build, and hunt, you gain experience and level up. At each level, you are given experience points that can be used to unlock new knowledge, like how to craft a spear, bow, or torch. You can then collect the materials to craft those items. It’s all a very gratifying experience. Some knowledge is predicated on others, so you may have to unlock one as a prerequisite for another. It is a logical and easy-to-follow system, though Ark‘s user interface can be confusing at times and leaves much to be desired.

Once you get the hang of crafting, the methods remain the same from primitive pickaxes to complex combat shotguns. Crafting also plays an integral role in taming creatures on the Ark. You will need to know how to craft narcotics to help the taming process and items like saddles to increase the usefulness of your pets.

There are lots of creatures on the Ark. And I mean a lot. Ranging from Dodo birds to the massive T-Rex, the place is alive with variety. You can even saddle up flying dinosaurs to quickly navigate from one place to another. All your favorite dinosaurs you grew up loving are here: Triceratops, Ankylosaurus, and even Plesiosaur. Although the developers behind Ark took some stylistic freedoms with their dinosaurs, it’s still jaw dropping to come across a Brontosaurus and realize how small you really are in comparison. The graphical abilities of the Unreal Engine 4 are also showcased in Ark by the details on the creatures, which are beautiful. Interestingly, not every creature has the same abilities in Ark, meaning you have to learn what each is best suited for. You wouldn’t want to try and ride a Dodo, would you?

Players in Ark can also breed dinosaurs/creatures, and they will either drop eggs or become pregnant. Be aware though, you need to keep the eggs warm and you might even end up with twins or triplets! As you would imagine, breeding can be a time-intensive process for players.

Combat in Ark is pretty straightforward, but be aware it’s not easy at first. You don’t have an aiming reticle with your primitive ranged weapons like the slingshot. You have to actually learn where to aim. This is made easier as you progress in knowledge, since your weapons improve and you can craft different attachments for them, including sights. Hand to hand/melee combat is easy, and the game seems pretty generous about landing blows most of the time, even against fast enemies. Your enemies vary, as well. Not all dinosaurs are aggressive, and not all players will attack you. I will say if you want to level up quickly, combat is the quickest way to earn experience points. For each level, you can increase aspects of your character, like health, stamina, etc.

Combat plays a key role in taming creatures as well. Blunt weapons give you a higher chance to incapacitate a creature and nurse it back to health, thus taming it. So, you’ll have to go into combat with a clear purpose.

The graphics in Ark are great when it comes to the environment and the creatures. The human characters? Not so much. Humans in Ark appear to have more in common with Fallout’s Super Mutants than Homo sapiens. Gun models and weapons look great. If you were looking for a more realistic-looking Minecraft-type experience, you might find it in Ark.

For my experience in Ark, I was able to play on a private server (a friend bought another Xbox One just so he could run one 24/7). I didn’t have to worry about being killed by other players in a PVE (player vs. everyone) scenario, just the occasional prank. Players can band together to defend their territory from rival tribes (tribes function similar to clans in other games, such as Call of Duty) and vicious top-of-the-food-chain dinosaurs. There’s much to be said about this ability – everyone’s experience with Ark will be different, and some people will take it well beyond the basics. Ark has serious potential to become a console heavyweight. If you’ve got friends, Ark is best played with them. Working together to combine resources pays dividends and makes your time spent in-game more productive. You’re pretty much limited only by your imagination, as is demonstrated by the trailer below.

I thoroughly enjoyed my time with Ark: Survival Evolved, and the game is still about seven months away from its full commercial release. During that time, developers plan to integrate community feedback into the Xbox One version with regular updates every two weeks. Planned updates include split screen support for couch-cooperative play, gamepad customization, UI improvements, tweaks to current game modes, balancing improvements, and all the new content that is going into the PC version. It appears publishers Studio Wildcard plan to add to their 60+ creature library as well: Before trying out Ark: Survival Evolved, I highly recommend you visit the wiki to learn about all the things that the game has to offer. It’s a good read to understand what you need to get started with crafting.

Are you playing Ark? Are you excited about it? What’s your opinion? Let us know in the comments below.