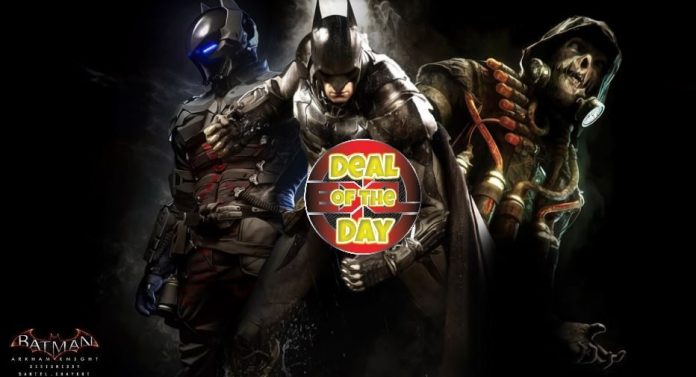 Today’s Deal of the Day is an amazing bargain. One of this year’s big titles, Batman: Arkham Knight on the Xbox One, has been reduced to $14.99 while stocks last.

This deal is available at Best Buy both online and in-store.

The shadows are his home and keeping Gotham’s citizens safe is his sustenance. Darkness envelops his every move and his legend lives in the whispers of each passerby. Known by many names — the Caped Crusader, the Dark Knight, Batman — this man lives to protect. But by pitting himself against the criminals of a city, he has only made his laundry list of powerful enemies grow. One after another, a new and nefarious threat has risen up and one after another Batman succeeded in bringing them down. But what happens when those menacing masterminds join forces? Who will rescue Gotham when a deadly roster of depraved lunatics gangs up on the shadowed warrior? Who will save us all?

The finale to the legendary Arkham series explodes onto your screen in the most adrenaline-pumping storyline yet. The Scarecrow has returned to Gotham City and he has united a terrifying team of super villains, including Penguin, Two-Face and Harley Quinn. For the first time in the franchise, you get to step behind the wheel of the iconic Batmobile as you harness the power of Batman and scramble to outwit the wicked gang after your blood. Tear through the streets and soar across the skyline in heart-pounding gameplay that will suck you in and force you to ask yourself if you have what it takes to save Gotham. Do you have it within you to be the hero the city needs? Or will the villains of Gotham overtake the Dark Knight once and for all?