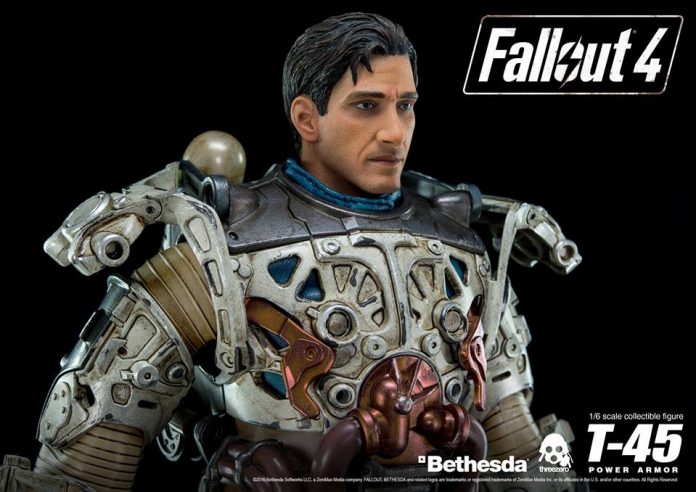 What difference do you think you can make, one man in all this madness?

Fallout 4‘s a game about making a difference. It’s also very popular. So much so, it’s getting a rather stunning action figure, decked out in a complete suit of T-45 Power Armor.

Wow! Look at that detail. Of course, it wouldn’t be a proper Fallout 4 action figure if you couldn’t remove the power armor. Once you do, you can then marvel at the detail present in the power armor frame.

Once the T-45 Power Armor’s off, it’s hard not to notice the vault dweller’s face. Of course it’s supposed to resemble the default character appearance in Fallout 4 – you know, the one from all the trailers? – and threezero does a pretty decent job of it, but looks more like famous actor Sean Penn. Not that there’s anything wrong with that, but the resemblance is uncanny. Perhaps it’s not a spitting image, but it’s clear there are similarities. I never felt the default game character looked like Sean Penn, so it’s interesting the action figure reminds me of the actor.

If you don’t like the head or want a female vault-dweller, threezero reports it is interchangeable with some of their other models.

Vault hunter Sean Penn aside, threezero appears to have done a wonderful job with the figure. It stands 14.5″ (36.8 cm) tall and features over 35 points of articulation. The figure comes complete with a minigun and AER-9 laser rifle. On top of all that, the figure has a removable fusion core, and the light on the T-45 helmet actually lights up. That’s beyond cool.

If you were hoping for a different power armor suit, threezero leaked some good news: All outer-armor pieces are detachable and interchangeable with upcoming FO4 Power Armor figures. So, at least we know there’s more on the way.

The 1/6th scale Fallout 4 T-45 Power Armor Collectible Figure will be available for pre-order at the threezero store starting at January 28th 9:00AM Hong Kong time. There’s no word on the actual ship date.

There’s always a catch with such a detailed figure: It’s $398 (with shipping). If that’s too rich for your blood, you can skip the minigun and get the figure for $380. If that’s still too much, you can simply look at the nice gallery of images here (that’s what I’ll be doing).