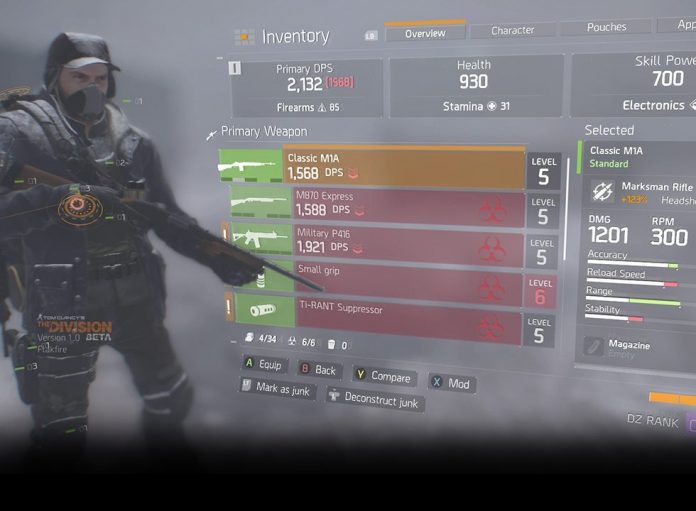 There’s been a lot of talk surrounding Ubisoft’s The Division. Will it live up to the hype? Will it work well? Will it be a Destiny clone?

I spent a couple hours with the Beta for The Division this morning, and I had a blast. It has some serious potential to be “the next big thing.” The third-person shooter and roleplaying game has my full attention. Let me outline my experiences so far:

The Division is best played with friends. I played both with and without friends and while the experiences were similar, there’s just something about cooperative gameplay that draws me in. True, you can play The Division all by your lonesome, but you’re always watching your back – especially if you head into the Dark Zone (the optional Player Versus Everyone area). It’s much more fun to work with friends as a team, since you feel more secure and you have a higher chance of success against the game’s NPC enemies and live players who decide to go “Rogue.” The “Hub” area at the start of the game actually displays other players in the game world, and you’re able to try and team up with them, if you like. The “Hub” is also the main location for buying and selling weapons and gear. You’ll also find your “Stash” here, where your loot goes after you successfully extract it from the Dark Zone. Buddy up.

Combat in The Division is pretty slick. You’re able to do evade rolls and huddle up to cover by pressing “A” (on Xbox One). The cover system is pretty intuitive and will feel natural to those players familiar with the same type of system used in games like Gears of War and Mass Effect 3. Weapons work well and the aiming sensitivity is spot on, when compared to popular games like Call of Duty and Battlefield. Grenade use can be a little tricky (you have to equip a grenade to then use it), but you adapt to it quickly. The abilities available to players in the Beta were limited, but the Radar Pulse ability is pretty clutch, highlighting enemies in the are around you for you and your group. This makes call outs and eliminating them a relatively quick process.

I found plenty of loot within my first hour or so of playing The Division. The best loot exists in the Dark Zone, but it’s a greater reward, greater risk situation. You never know if the person who has been helping you in the Dark Zone has a great weapon you may want – and he or she doesn’t know if you do, either. In the Dark Zone, you can kill other players (even your own teammates) for their loot. It adds a whole new level of unpredictability in the game. I was severely disappointed I lost my “Trendy Hiking Boots” when I died in the Dark Zone. My group tried to extract at a location full of other players and mass pandemonium broke out. Incidentally, if one of your teammates goes “Rogue” (attacks a non-hostile player), your whole group is tagged as Rogue and other players can kill you for a bounty. This is a time limited effect, and if you survive long enough for it to wear off, you’re granted a monetary reward.

After dying a lot trying to get back to our loot, my team abandoned the effort and explored a different area of the Dark Zone. We killed more NPCs (and a couple other players who thought it would be a good idea to shoot first and ask questions later), collected new loot and extracted it at a different location with zero resistance. We even picked up a “blueberry” on the way – a friendly, non-party, live player who stuck with us for a while and did not engage us. He was actually quite helpful, and we returned the favor. I sent him a friend request afterwards. It’s important to note that any loot found in the Dark Zone must be extracted for it to be useable. There are different levels of loot (for example: common is white, green is uncommon, blue is rare, etc.) and items may have different attributes that impact your character or weapon, so pay attention to the details. You also don’t need to worry about getting to loot first, the game generates it randomly for each player, so you don’t have to fight over it (at first).

At the start of the Beta, you’re able to create a unique character. Unfortunately, many of the options are locked as part of the Beta, so I went with a character who looked somewhat similar to John Snow from Game of Thrones (Winter is coming… to New York). Equipping your character is very easy in The Division. Once you pick something up (unless you’re in the Dark Zone and it need to be decontaminated) you can equip it immediately, provided you are at or above the level required to use it. This goes for armor, clothing, weapons, and modifications. I was particularly impressed that I could modify my gun on the fly, adding scopes and grips without having to use some sort of weapons table (like in Fallout 4). It was quick and easy. In addition to your armor you can equip, your character can also equip clothing for a different appearance. It’s a nice touch. Many games tie your appearance to your armor, but The Division allows you a little more personal freedom in making your character more personable. All of this can be done on the fly in a menu.

Graphically, The Division is solid, even in Beta. I didn’t have any noticeable drops in framerate, and everything looks phenomenal. I know there was some concern over a downgrade because of the way Ubisoft changed Watchdogs at release, but I don’t see that happening here. It looks as good as it did in the Alpha and runs smoothly. I also appreciated the small details in the game – if you take cover at a vehicle with an open door, your character closes it. It’s minor, but it’s something that adds an extra bit of realism to The Division. The dynamic weather system in the game also adds another level of complexity. When a snowstorm rolls in, your visibility is impacted in a big way. It’s quite an experience to combat enemies in such a situation.

In the Beta, there isn’t a lot of information on The Division‘s storyline, but I was interested from what I saw. I also played a few side quests available in the Beta and they are what you would expect from an RPG: take out a leader, retrieve an item, or fix a water supply. These seemingly menial tasks are given more purpose since they help establish The Division‘s foothold in the city. Completing quests will improve your available facilities, provide you weapon or gear blueprints (crafting is not functional in the Beta), and help you unlock abilities. We’ll see this play out in more detail in the full release of The Division.

I did have another experience in the Beta I wanted to discuss, and that is the lengths to which Ubisoft went in an effort to make us feel for the city’s inhabitants. I felt sorry for the first officer who briefs you once your boots hit the ground. She tells you she’s stuck doing radio work because of her sciatica. There is no rest for these people, both civilians and soldiers. Civilians can be seen scavenging in the streets, just trying to survive. Dogs wander without their owners. I even bumped into an NPC who needed a medpack. I obliged, and he gave me his hat. That meant something. Although it was just a hat, you really felt like that was all this person could offer. It has been a while since I genuinely felt something for the world in which a video game was set.

Overall, I was very impressed with The Division after spending a couple hours with it. I had a great time playing with friends and on my own. I’m looking forward to the full release of the game on March 8, 2016. If you want to check out almost two hours of gameplay from my time in the beta, you can check it out below.

Have you played the Beta? What are your thoughts? Let us know in the comments below.