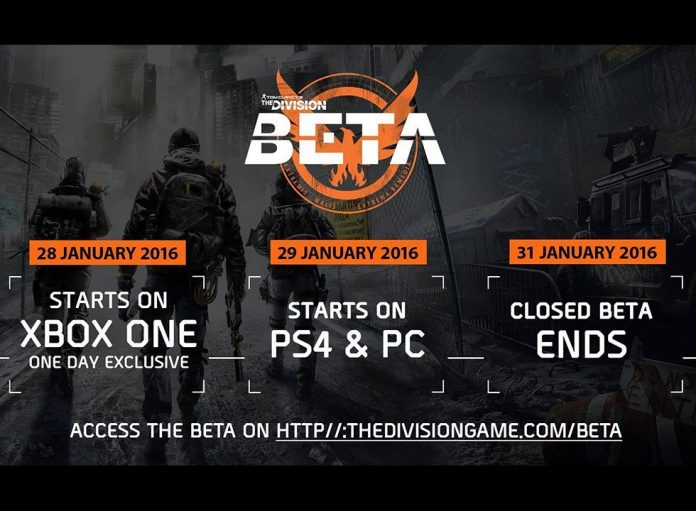 There are lots of questions surrounding the Beta for Ubisoft’s The Divison.

One of those questions is: “When is it?” Well, Xbox One owners can fire up the Beta on January 28th with 24-hour early access, while PS4 and PC players can begin on January 29th. It ends January 31st.

The other question is: “What will be available in the Beta?” Thankfully Ubisoft published some details this weekend about what you’ll be doing with friends in the Beta for The Division:

“Beginning on Manhattan’s Chelsea Pier, the beta will take you through early story-driven missions that establish your foothold in New York. You’ll team up with other agents to battle for loot and outwit other agents in the PvP-enabled Dark Zone.”

This should give us a good feel for how campaign missions work in The Division, and it’s good news they’re referring to them as “story-driven,” because Ubisoft’s most recent release, Rainbow Six: Siege didn’t even have a campaign. Another post on the Ubisoft blog clarifies the “Dark Zone” experience:

“The Dark Zone is the PvP-enabled area populated with enemies and other players. The reason it’s PvP-enabled and not strictly labeled as a PvP zone is pretty simple: you ultimately make the choice whether to engage in PvP or not. As you probably have seen by now, most squads in the Dark Zone are there because they want to get some of the better loot in the game. At any given time, other players can either help them get that loot, or they can try to take it from them. Choosing the latter means that you’ve gone rogue, and will be designated as such to other agents – who are then free to kill you without going rogue themselves.”

There’s no word on whether or not weapons or other gear retrieved from the Dark Zone in Beta will carry over to the final game, but the Beta FAQ page states Beta players may be eligible to receive special in-game rewards that can be unlocked in the full release of the game.

To sign up for the Beta, visit thedivisiongame.com/beta. If you preordered The Divison, you already have guaranteed access. If you didn’t, you can still enter for a chance to play.