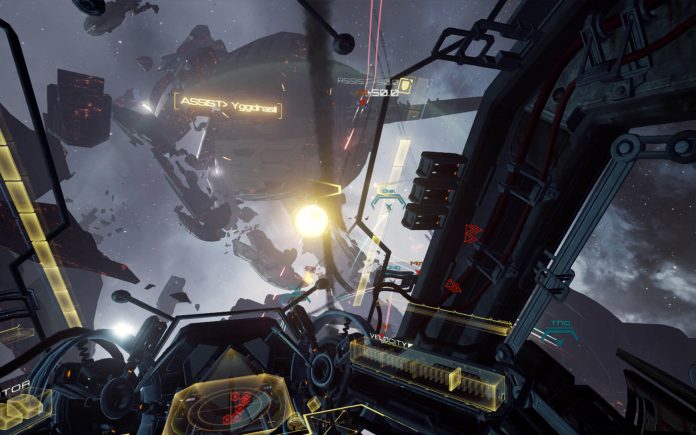 One of the hottest PSVR games currently in development is an intense dogfighter called EVE: Valkyrie from developers CCP Games.

We spoke with Mr Kahan this week to get further insight into what makes EVE: Valkyrie stand out as a must have title for VR technology, and what you can expect as far as content goes and other crucial development considerations. Adam, for those who haven’t experienced PSVR yet, how would you describe the almost ‘out of body’ experience that EVE: Valkyrie will give them?

“This is a really tough question to answer in words.  I really think virtual reality gaming is like the Matrix, nobody can describe it to you, you have to experience it for yourself!  But the best word to describe it is “presence.”  You aren’t looking at a screen showing your virtual avatar sitting in a cockpit anymore, you are the one sitting in a cockpit.  The world is all around you.  We’ve shown EVE: Valkyrie at dozens of events to thousands of people, and I’ve never seen anyone not be convinced that VR is a game changer.”

How do you manage your aspirations and expectations for how you want EVE: Valkyrie to look graphically, vs. how PSVR allows you to utilize their technology in conjunction with your game?

“All game developers are used to this tug of war.  We all want as much power as we can get, but the reality is that the PS4 is already a very powerful machine, and the technological wizardry of the PSVR system help a lot to make it even better for VR.  The PSVR breakout box has dedicated chips that, for example, give us “free” upscaling from 60Hz to 120Hz.  That’s amazing, and super helpful.”

What sets EVE: Valkyrie apart from other games in the same genre?

“We’re built from the ground up for VR.  It seems simple, but it’s been revelatory for the team and has driven every single game design decision from day one.  I think people will find that games that are ported to VR, or that have VR elements grafted on top of a 2D game aren’t going to deliver like games that are purpose built for VR.”

Why should people who have had no prior exposure to games similar to this, more specifically VR games, check out EVE: Valkyrie?

“I guess there are a couple reasons:  One, because EVE: Valkyrie is going to be the perfect match for the PSVR headset when it comes out.  It’s built for VR, it looks amazing, it’s multiplayer focused, and it’s dead simple to get into the cockpit and start shooting.

Two, it’s not just us saying it.  We’ve got both press and people who have had a chance to play it at events saying that EVE: Valkyrie is awesome, and possibly a “killer app” for the platform.”

“EVE: Valkyrie is focused on online multiplayer combat, but we will ship with some single-player content.  We’ll have a series of missions called ‘Chronicles’ that will tell a bit of the backstory of the game, and we’ll have some other modes that will allow people to play solo, but it’s not a single-player campaign, nor is it meant to replace multiplayer.”

How does the hardware and field of view work in conjunction with the game to create an immersive experience? “The PSVR headset makes EVE: Valkyrie what it is.  The wizards at Sony have done an amazing job.”

Is EVE: Valkyrie going to be a PSVR title only or can gamers without this technology expect a release on standard consoles in the future?

“EVE: Valkyrie is built from the ground up for VR headsets, and we have no plans to offer it for play without one.”

I have experienced EVE: Valkyrie first hand at PSX late last year and it was easily my favourite demonstration, setting itself part from the field in both quality and impact.

Yesterday CCP Games released new footage of gameplay from the Alpha testing which, while it does show you how beautiful the game is and the high-octane, adrenaline filled dog fights that you can look forward to, it doesn’t really do the game justice compared to the experience of actually ‘sitting’ in that cockpit and flying it yourself.

If at any point you get an opportunity to test out VR technology I highly recommend you take it, but more specifically if you find yourself near an EVE: Valkyrie demonstration, no matter how long the line up is – WAIT! Experience this game for yourself as I too truly believe it will be a gamer changer that will ensure the success of devices such as PSVR.

I look forward to more news from EVE: Valkyrie in the coming months.