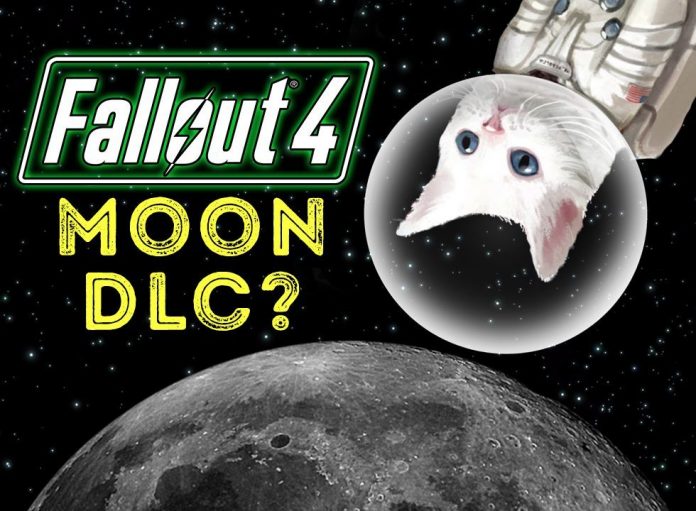 As we wait for news on Fallout 4’s first pack of upcoming downloadable content (DLC), we can’t keep our imaginations from running wild.

There are many rumors in the Fallout 4 community about where we’ll go in the first expansion pack for the game. Some of them are more likely than others. One of the more unlikely scenarios is a trip to the moon, but it’s a fan favorite. So, how would such a DLC fit into the Fallout universe?

If you can’t view the video: well, in a way, it already fits. In Fallout 3‘s DLC Mothership Zeta, the character is abducted by aliens and taken to space (where a lot of weird stuff happens). Eventually, the character fights for the control of the ship – and succeeds – teleporting back to Earth. Some don’t consider the expansion canon, meaning it never officially happened, but it does provide a precedent for space travel. Mothership Zeta isn’t the only reference to space travel we have, either. In Fallout 3, you’ll find a lot of references in the Museum of Technology at The Mall, including a replica of a Virgo II Lunar Lander and a Delta rocket. According to exhibits in the museum, moon mission Valiant 11 made contact with the lunar surface on July 16, 1969. On November 14, 1969, the Virgo III Lander Valiant 12 also landed on the Moon. The bombs didn’t fall until 2077 – over 100 years later. That’s a lot of time to put a base on the moon – and the supposed last time they were there was 2052.

You might say “well that’s impossible!” – which is a totally logical reaction, until you dig deeper into the history of the United States Space Administration (Fallout’s version of NASA). In Fallout 4, while completing a quest for the Brotherhood of Steel, you enter ArcJet Systems. The company was contracted by USSA before the Great War to produce the XMB booster engine for the Mars Shot Project. Weight issues with the rocket delayed the project, and it’s unlikely a launch ever took place because the mission was scheduled a year after the bombs fell. There’s also the unique problem of Fallout Van Buren (Black Isle’s cancelled version of Fallout 3). While it’s non-cannon, it doesn’t mean Bethesda can’t or won’t pull from the material in Fallout 4 (some material from the cancelled game made it into Fallout: New Vegas, such as Caesar’s Legion). In Van Buren, the USSA seems to have a better handle on space travel, putting Ballistic Orbital Missile Base 001 (abbreviated B.O.M.B.-001) into space. B.O.M.B.-001 is a large, donut-shaped, long-term space station capable of firing twenty-four nuclear-tipped ballistic missiles. These examples are solid evidence the Commonwealth government had the technology and means to put people into space, potentially on the Moon or even Mars.

But has anyone made it to space since The Great War (without being abducted)? In Fallout: New Vegas and the quest “Come Fly With Me,” you can help a ghoul named Jason Bright and his band of followers on a journey to a “sacred place” named the Far Beyond. They take this journey on rockets from the REPCONN Test Site. Unfortunately, we don’t know where they go if they are successful (it’s likely somewhere in space), but the key takeaway here is that they can be successful.

So, if there was DLC on the moon, how would you get there? There may be locations in Fallout 4 that would be suitable for the role, like the Sentinel missile site in The Glowing Sea. Or, perhaps the crashed alien spaceship can be brought back to a working condition (it seems largely intact). Of course, there could be other yet-to-be-disclosed methods. But if we succeed in getting to the Moon (or Mars), what would there be to do there?

The Moon has fascinated people, long before the invention of spaceflight. In fact, people predicted moon colonies as early as the 1600s. But the idea wasn’t just some sci-fi fantasy – it had a serious chance of happening. Project Horizon was a study completed to determine the feasibility of constructing a scientific/military base on the Moon. The report was issued on June 8, 1959. According to Wernher von Braun, father of rockets, “The lunar outpost is required to develop and protect potential United States interests on the moon; to develop techniques in moon-based surveillance of the earth and space, in communications relay, and in operations on the surface of the moon; to serve as a base for exploration of the moon, for further exploration into space and for military operations on the moon if required; and to support scientific investigations on the moon.”

The project had an ambitious timeline:

This program required a total of 61 Saturn I and 88 Saturn II launches up to November 1966. During this period the rockets would transport some 220 tonnes of useful cargo to the Moon

Sadly, Horizon never progressed past the feasibility stage in an official capacity. There were also other proposed projects, like the Lunex Project, which also never came to fruition.

But this is the Fallout universe. Things happen here that don’t happen in reality.

If there were Commonwealth moon colonies, there would likely be Chinese colonies as well. It goes hand-in-hand with the weapon proliferation associated with the build up to The Great War. If such colonies existed, they would now have been cut off from the Earth for 200 years. Would they still be at war with one another, like Japanese hold-outs from World War II, refusing to believe it’s all over? Would they be completely destroyed? Would they have resolved their differences? I’d like to find out. The Moon also presents interesting challenges from a settlement standpoint, you’d have to balance food, water, and air to keep your settlers alive.

There are also a few subtle hints in Fallout 4 for space travel and the moon. In Concord’s Museum of Freedom (another possible source for DLC), the large wall mural shows the Moon and astronauts on its surface. We know a significant historical event occurred at the Sea of Tranquility on the Moon, but no details survive of this event. There are also a couple posters scattered about in Fallout 4: one of them depicts Mr. Pebbles, the first cat in space, and the other is a movie poster for “Communists from Space!!”

Will we discover the details of what happened at the Sea of Tranquility?

Will we fight communists from the stars?

Will we find Mr. Pebbles?

I suppose we’ll find out if, and when, Bethesda makes an official announcement on downloadable content for Fallout 4 in the coming weeks.

What do you think about traveling to the moon? What’s your DLC theory? Tell us in the comments.