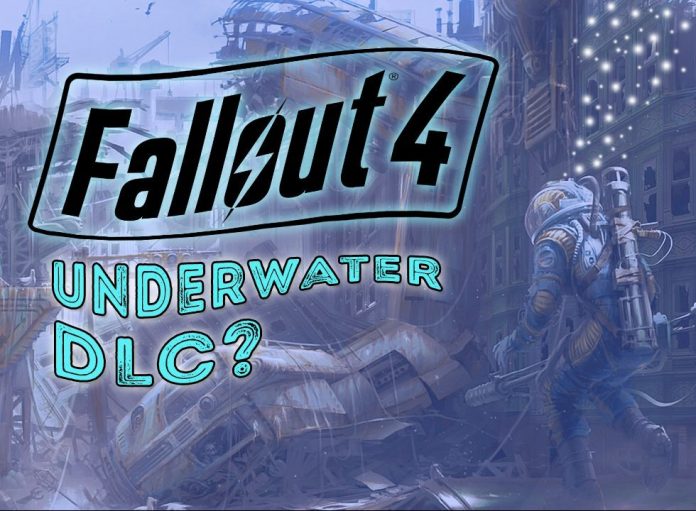 In the absence of announcements from Bethesda on downloadable content (DLC) for the hit game Fallout 4, we’re been combing the Internet for information that may lead us to details on the soon-to-be-announced expansions.

What we’ve found is interesting, and lends more evidence to the idea that the first pack of DLC for Fallout 4 will be aquatic in nature. Check it out below:

If you’re unable to view the video, here are the details.

One of the main theories for DLC involves the Boston coastline. Various players, including myself, have found interesting structures in the waters off the coast. Many of these structures lead, via pipes, to the Nahant Oceanological Society. I mentioned in a previous article on DLC, that the Nahant Oceanological Society was a military installation during World War II and the Cold War.

During WWII, bunkers were installed where the Nahant Oceanological Society is currently located. They featured massive 16-inch, 12-inch, and 6-inch gun batteries and were designated by the U.S. Army as three of the five top assets to defend Boston Harbor against attack. In the Cold War, Nike anti-missile/anti-aircraft Missile batteries were installed in the same location. Currently, the area near the bunkers is walled off and used as a park. The actual bunkers themselves have been converted to marine laboratories, and the guns were removed long ago.

In Fallout 4, there’s no sign of the bunkers or missile sites in Nahant, Massachusetts, but the marine laboratories are there. The Commonwealth government (and Vault-Tec) has a long history of covering up expenditures related to military projects, so it’s possible that the installation may be much larger than meets the eye. This possibility is made even more likely in the Fallout universe because of fervent anti-communism attitude and fear-mongering. Building such a large, secret military installation would have been a high priority – and the Nahant Oceanological Society has the bones and history for it.

Speaking of the Nahant Oceanological Society, why even put it in the game? There are several other locations in Boston that would be better allocations of developer time, unless they were planning a larger role for it. Inside the society’s laboratory, there are a few things to suggest there’s more content to come. If you take a look around the building, not only do you see a power armor station with no apparent purpose, but there’s also a machine that is clearly used to fill oxygen tanks. These point to a launching point for missions and potentially special aquatic power armor. Adding more clout to this theory, is Fallout 4’s concept art.

When you look at concept art, it’s important to remember two things: these are rough ideas, and they don’t always make it into the game (as evidenced by The Institute’s Power Armor idea, or Mama Murphy riding a Mr. Handy). Concept art for Fallout 4 features many characters holding aquatic weaponry. These range from small, hand-held harpoon guns (like the cut-content harpoon gun), to large tripod-mounted harpoons. There’s even a trident launcher. Perhaps these ideas were left by the wayside as the game moved forward in development, but there’s an awfully strong focus on the fishing industry present in the art.

One of the concept art pictures features a new faction of enemies in Fallout 4 called “Wharf Rats.” Images of the Wharf Rats suggest they live exclusively on the shore or at sea. Perhaps the developers thought it would take too much time and resources to finish this faction, or perhaps they are being saved for future DLC. Another piece of concept art shows the Lone Survivor moving through the Boston ruins in what appears to be some sort of aquatic vault-suit. It could be a variation of the Haz-Mat suit, but the overall design seems different.

Keep in mind, these are only the images Bethesda allowed to be released. They’ve likely been scrubbed of potential DLC spoilers, so we’re only seeing what they let us see. We could be way off the mark here, but there’s a lot of evidence pointing to the water for DLC – especially the fact that it covers about 1/3 of the map in the game, and there’s specifically a perk that allows you to breathe underwater. Why give us that unless we’ll be spending a lot of time there?

What do you think about our theories and finds? Let us know in the comments.