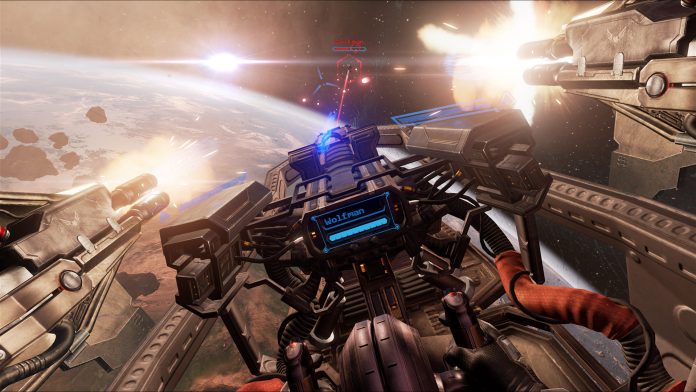 EVE Valkyrie is an intense VR dogfighter that is set to launch on PlayStation VR, Oculus Rift and HTC Vive headsets in the near future.

It’s hard to convey to someone who has not used VR technology just how immensely it alters your experience to completely immerse you in the world generated around you. As the new generation of VR devices get closer to landing on shelves, the opportunity for you to try this revolutionary technology for yourself will become more readily available, and we highly recommend you take any opportunity that you can get.

By harnessing the power of VR technology, EVE Valkyrie has been able to put you into the cockpit of a space ship which launches you into high speed, adrenalin pumped dogfights, the likes of which you have never experienced before.

Developers CCP Games, have released a new ‘Alpha Trailer’ showcasing some extremely hectic gameplay, which if you can try and imagine that your entire field of view will be taken up by what you are seeing on the screen, really excites any competitive gamer.

If you already have your hands on an Oculus Rift device you can sign up today to be a part of the Alpha testing for EVE Valkyrie that will entitle you to the ‘Founder’s Pack’, which includes:

To sign up for the Alpha, or to take a closer look at purchasing an Oculus Rift device visit the EVE Valkyrie website.

EVE: Valkyrie has been built from the ground up to harness the very latest advances in virtual reality technology, immersing you in the action like no other game before. It will be available on a wide variety of VR hardware, including Oculus Rift and Sony’s Project Morpheus.

Advance your character in both rank and reputation, unlocking advanced ships, equipment and new weaponry.

Take part in epic team-based dogfights, where split-second decisions can make the difference between success and failure.

Perform strategic strikes and tactical advances with a near limitless field of view and acrobatic maneuvering.

EVE Online’s exotic distant nebulae, beautifully rendered artwork, and rich soundtrack surround you as you plunge into the fast and furious realm of EVE: Valkyrie.