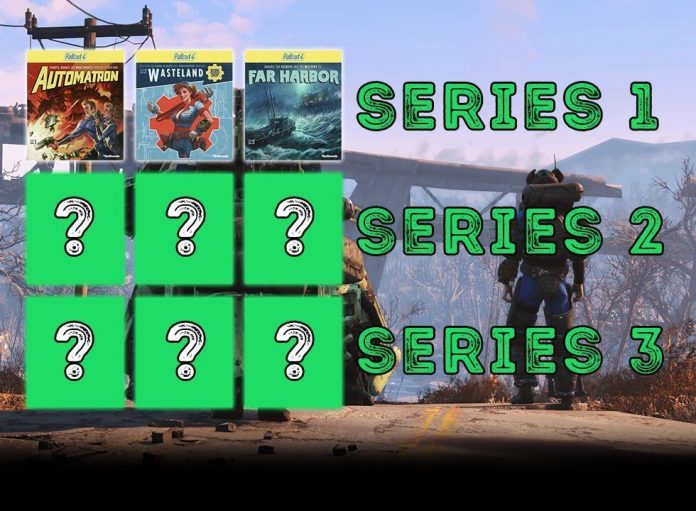 With the recent announcement of the first three downloadable content (DLC) packs for the hit game Fallout 4, developer Bethesda created a storm of player interest.

Bethesda created five packs of downloadable content for Fallout 3, and they were all pretty beefy. What has been announced thus far for the Fallout 4 Season Pass seems a little lean compared to Fallout 3. This is not a bad thing – let me explain why.

If you can’t watch the video: In the original DLC announcement, Bethesda may have leaked some big details, “our first series of add-ons.” Series. Bethesda will release several series of downloadable content for Fallout 4. The announcement indicates there will be at least one more series of DLC, and probably two. This would bring the total number of DLC packs to anywhere between six and nine. I’m going to lean towards nine – We’re seeing content release every month from March to May for the first series. Series Two would likely release content between June and August, and Series Three would likely release between September and December. Bethesda has promised all DLC in the Season Pass will come in 2016, so it times out perfectly.

I don’t want to speculate too much, but the first series of DLC appears to include what basically amounts to a small story/gear pack, settlement expansion pack, and major story expansion. It makes sense to do a couple more series designed this way. All of this is on top of Bethesda’s updates to Fallout 4 – We know an overhaul to Survival Mode is coming, plus support for Mods, and that’s all free.

As part of the original DLC announcement, Bethesda also released pricing information for each of the three announced expansion packs: Automatron will cost $9.99 (US), Wasteland Workshop will cost $4.99 (US), and Far Harbor will cost $24.99 (US). That totals to about $40 alone – $10 more than the price of the Season Pass. If we are getting between six to nine total DLC packs, then Bethesda’s original asking price of $30 for the Season Pass is an absolute steal. Although Bethesda announced the Season Pass price would jump to $50 on March 1st, players still ought to be thrilled with their purchase. However, some gamers were still upset at the the price increase, venting on social media networks like Twitter:

@DCDeacon is the Twitter handle of Bethesda’s Vice President of Public Relations and Marketing, Pete Hines. Hines has been fielding plenty of responses from Fallout 4 fans upset with the company’s decision to raise the price of the game’s Season Pass. However, one of his tweets was particularly poignant, and happened to be in response to @thesoulpack‘s tweet:

If you’d like to view the whole conversation, you can do that here. Hines comes off as a little cold, but he’s not without good reason. Bethesda made the DLC announcement on February 16th, and the price increase won’t take effect for nearly two weeks – that’s more than enough time to stroll into your local game store or jump on a service like Xbox Live or the Playstation Network to purchase it.

According to the original DLC press release, Bethesda states, “We have plans for more. More than $60 worth of new Fallout adventures and features throughout 2016.” It’s unclear if this means an additional $60 worth of content on top of the already announced $40, or just a couple more expansion packs. When we reached out to Pete Hines, he could only say that they haven’t announced how many.

Given Bethesda’s plans for DLC, the increase in the asking price is more than reasonable. Especially when the company has the decency to inform you ahead of time. I understand that purchasing a Season Pass can be seen as somewhat of an investment, especially if you are a student, or if you’re not exactly rolling in money – I have been there. Bethesda is even giving fans a shot at playing the downloadable content for free as part of a DLC Beta. You must be at least 18 years or older to sign up, and there is a Non-Disclosure Agreement (NDA), but if you are selected for the program, you get all the DLC, gratis. That’s a sweet deal.

Bethesda has, at every turn, shown themselves to be a shining example of a company that makes a concerted effort to develop player-centered experiences – Whether that’s through putting together an absolutely massive game, consistently updating it, or listening to player feedback. If you’re on the fence about the Season Pass, or unhappy with the upcoming price increase, remember the words of Twitter user @ArchAzrael.

I trust Bethesda as a developer. Do you? Let us know in the comments.