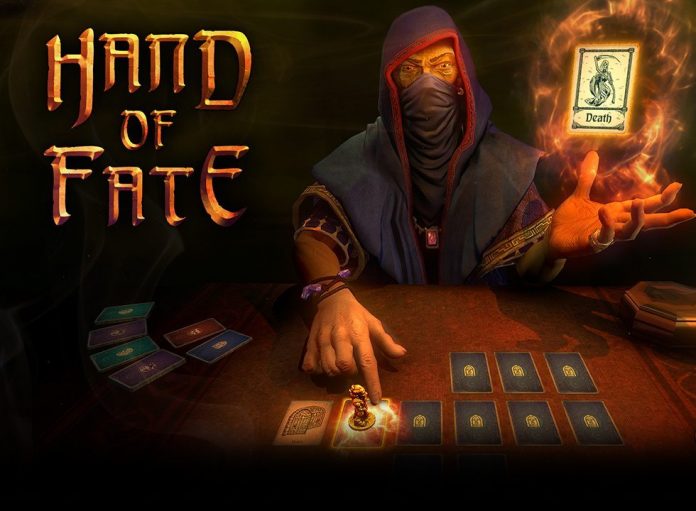 I’ve played my fair share of games – not just video games, either. I’ve spent time playing the card game Magic the Gathering, the board game Betrayal: House on Haunted Hill, and even dabbling in Dungeons & Dragons. Even so, I was not sure what to expect from Defiant Development’s “hybrid roguelike/action-RPG/deck builder” Hand of Fate.

The game is currently available to download for free, for Xbox Live Gold subscribers. So, I thought “what the heck?”

It turned out to be a very good decision. Check out the video below:

If you can’t view the video, Hand of Fate tells a story using cards, which has a couple great effects – the game is always different because of the randomness of the draw, and you unlock new cards while you play. The end result is a sprawling role-playing game (RPG), with plenty of adventure to be had. You further your character’s story by moving a token from card to card, revealing a new situation on each card that your character must face.

You’ll have to balance your character’s health and food needs as you progress, making sure you’re prepared for the worst. You’ll find loot, and equip your character, just like any standard RPG. It’s actually a pretty simple game in terms of mechanics, but if you’ve got an imagination, you’ll have a great time playing with your character. The game is also challenging, however. The dealer will sometimes place a curse on your character – and some of them hurt. A lot. Countering this, you may find blessings in the game that will give your character a boost.

When it comes time to combat enemies, Hand of Fate morphs from card game to action-adventure game. You engage enemies in combat using the A, B, and Y buttons, and can also equip other abilities on the right bumper to give your character an advantage in a pinch. The enemies themselves are quite varied – you’ll face anything from “Lizardmen” to “Ratmen” and “Dust” skeletons. The number of enemies you face is determined by the luck of the draw, so you never know what to expect. In addition to these standard enemies, you can also face bosses (the King, Queen, and Jack cards) which have their own special abilities and attacks.

Make sure you have equipment with you at all times – don’t sell all your spare weapons, shields, and armor, either. There are cards in the game that can take them away from you (like goblins), and let’s just say that you won’t live long without a proper shield (I found this out the hard way).

There are two game modes in Hand of Fate: Story Mode and Endless Mode. You have to complete a good chunk of the Story Mode to unlock Endless Mode, but Endless Mode is where the fun is at. Instead of your character’s gear resetting every round, you keep it with you as you progress. This helps develop the RPG feel of Hands of Fate. Eventually, you’ll die in Endless Mode, but it’s not for nothing – you unlock new cards that will make your next experience different and more interesting. If you do actually run out of cards to unlock, you can purchase the game’s singular pack of downloadable content (DLC) Wildcards for only $4.99, which adds new cards, encounters, and special items.

Overall, Hand of Fate is a lot of fun. I spent several hours playing the game, and it may be my favorite Games With Gold entry to date. If you’re an Xbox One user and Gold Subscriber, be sure to download the game. It’s available for free until February 29th.

For more information on Hand of Fate and Defiant Development’s other games, visit defiantdev.com. If you want to see more gameplay from Hand of Fate, check out the videos below: