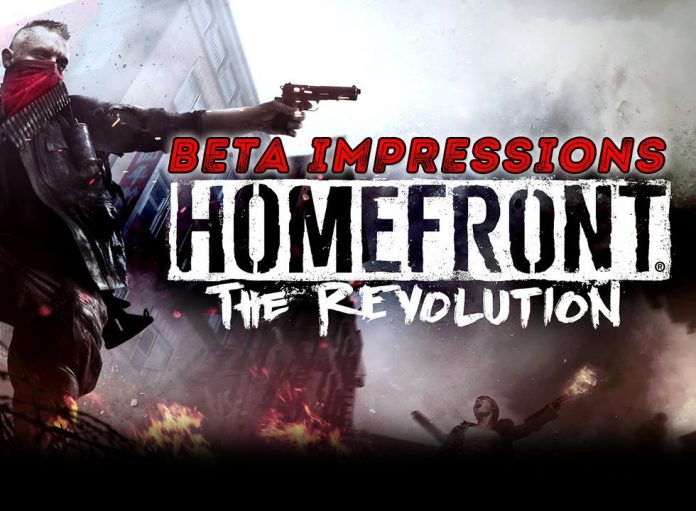 We were finally able to get our hands on Homefront: The Revolution from Dambuster Studios and Deep Silver during the game’s Closed Beta. Players were able to take part in the game’s multiplayer “Resistance Mode,” so what did we think?

If you’re unable to view the video, let’s break it down:

Homefront: The Revolution is the sequel to the original Homefront, which was developed by now-defunct Kaos Studios and released back in 2011. The original game was, to say the least, underwhelming. Dambuster Studios has an opportunity to carve a new identity for the Homefront franchise with The Revolution, so how did it play in the Beta?

While Homefront: The Revolution has a single-player mode, we were only able to play the four-player, co-operative “Resistance Mode.” In this mode, players work as a team to complete objectives. It’s somewhat similar to Battlefield’s “Rush Mode,” but objectives and their locations vary, meaning more variety for the player. Generally, the objectives are pretty simple (destroy something, eliminate enemies, etc). Players are always severely outnumbered on each mission, which means a quick and sudden death if you don’t work together as a team. This can be challenging if you are playing with random online players, so Resistance Mode is best enjoyed with a friend, or at least someone with a microphone.

Resistance Mode is not supposed to be a cakewalk, and it isn’t. Aside from being outnumbered, the AI in the game is actually pretty decent. Enemies will rush you or try to flank in an effort to catch you vulnerable. If you don’t stick with your group, enemies may spawn between you and other fireteam members, leaving you isolated and totally outgunned. To counter this, you’re given a wide array of items for your Guerrilla Tool Kit (GTK). These range from explosives to hacking devices. You can take out large groups of enemies, deny movement paths, or even hack Nork tanks and other equipment. A neat gameplay mechanic in Revolution is the ability to craft more of these items from components scavenged from enemies or the game’s environment, while in-game.

Crafting is a skill that needs to be unlocked. In many ways Revolution’s Resistance Mode plays like a RPG. Your character levels up, you collect money, purchase loot, select skills, and improve your character. It takes time, which makes sense from the game’s point of view. Your character is not a battle-hardened commando. He or she is a simply a citizen that has had enough. As you progress in Resistance Mode, you unlock new weapons, mods, and gear by purchasing crates with money earned in-game. You also unlock skills, which determine the build of your character. These builds range from sniper, to medic, to tech expert, to tank. You build your character to suit your gameplay style. You can even play missions stealthily – enemies have an awareness meter and line of sight, so you can avoid them or ambush them with hand-to-hand takedowns.

Weapons in the Beta were pretty slick. If you have the parts, you can alter your weapon in real time, changing an assault rifle to a light machine gun. You can do the same with a semi-auto sniper rifle and a bolt-action (and probably other weapons). It’s neat to be able to make adjustments to your weapon on-the-fly to suit your current situation. To keep those weapons stocked, you’ll want to loot enemies for ammunition. In Revolution, you have to manually loot a body. This means standing over your foe and holding a button to take their leftover ammo. This is in contrast to games like Call of Duty that automatically collect ammunition from bodies. It takes some getting used to, but it’s a neat way to introduce a risk-reward system and bring more realism into the game. If you were looting an enemy in real life, you’d want to do it quickly and not take your eyes away from the direction of possible attacks. Dambuster Studios’ decision to include this mechanic makes the game more intense, though some will find it annoying.

The actual movement mechanics and gunplay are adequate in Revolution. They’re not great. I don’t understand why it is difficult to mimic the same sensitivity that we see in other major shooters like Call of Duty and Battlefield. Aiming in Revolution feels different. That decision may be deliberate, but I hate having to compensate for different sensitivities. Fixing this would increase the game’s appeal significantly. Mantling objects in the world is somewhat awkward and there were several instances of bodies becoming stuck strangely or enemies warping from one cover to another. It was jarring and removed me from the game. I didn’t encounter any significant (gamebreaking) bugs, however. The game needs polish, absolutely. Thankfully, Dambuster Studios has a significant amount of time to polish their product, which will be released on May 17th (word is the closed beta’s version is dated pre-December 2015, meaning there’s a generous amount of time to make improvements).

It’s obvious to me that with Tom Clancy’s The Division on the horizon, Homefront: The Revolution will inevitably be compared to the game. It’s not really a fair competition, though. They are different games, and they are fun in their own ways (based on my experience playing both Betas). Players who enjoy a more realistic experience, like Operation: Flashpoint will find themselves much more at home in Homefront: The Revolution. People who enjoy games like Destiny will undoubtedly enjoy The Division more.

For more information on Homefront: The Revolution, visit homefront-game.com.