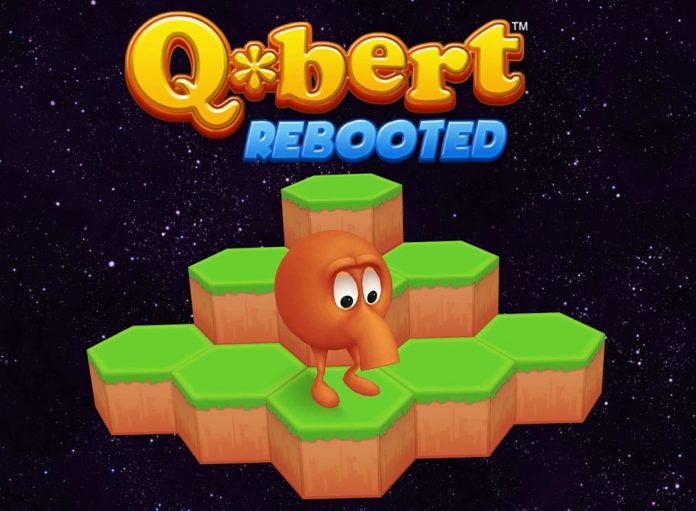 Much time has passed since the original Q*bert hit arcades in 1982, and things have changed a lot – many arcades faded away and consoles became a household staple. But one thing that never changed was players’ love for the little, bouncy orange creature with a pronounced snout.

With the recent release of Q*Bert: Rebooted, players once again are able to pick up the controller to guide Q*Bert through his M.C. Escher-styled world. In fact, it’s the first time in 15 years Q*Bert has seen a reboot, so did Gonzo Games and Sideline Amusement do the game justice?

If you can’t view the video: I’ll be up-front with you – prior to this review, I had never played the original Q*Bert. Conveniently, Gonzo Games and Sideline Amusement include Q*Bert: Classic as part of Q*Bert: Rebooted, so I was able to sample what I had been missing all these years. From the main menu, you can easily choose between Q*Bert: Classic and Q*Bert: Rebooted, which is something longtime fans of the series will appreciate.

For this review, I’ll be focusing on Q*Bert: Rebooted (since it’s the new entry). It was frustrating at first. Not because of poor gameplay, bugs, or other problems – but because I had never played a game quite like Q*Bert. It took a little getting used to. Once I got over the learning curve, Q*Bert was enjoyable.

Q*Bert: Rebooted bears all the hallmarks of a game with roots in the early years of video game development: its gameplay mechanics are simple, and there’s little story or plot present. Q*Bert’s only motivation is to change the colors of tiles, avoid enemies, and try not to fall from the hexagons. I’m not asking for significant character or world development like the Sunday Supercade Q*Bert television show, but it would have been a nice touch. Still, there’s something charming about the simplicity present in Q*Bert: Rebooted.

To Gonzo Games and Sideline Amusement’s credit, they did increase the connection the player can have with Q*Bert by offering new costumes that can be unlocked by collecting gems in each level. Some of these costumes are great: players will enjoy jumping around as Q*Zilla or Q*nicorn.

In contrast to the classic version, Q*Bert: Rebooted doesn’t stick to forcing Q*Bert to move at 45 degree angles. You can now move Q*Bert vertically. Honestly, this made the game much more fun. All your favorite enemies are back, including: Coily, Wrong-Way, Slick, and Sam. Q*Bert: Rebooted‘s developers also added a couple other enemies to mix things up.

To provide a more challenging experience, each level in Q*Bert: Rebooted has three bonus objectives players can complete in addition to finishing the level. This increases the longevity of the game, since players will find themselves going back to previous levels to earn all the objective stars. You’re also able to compete against your friends for completing levels the fastest. And speaking of levels – there are a lot of them (40, to be precise). There’s enough content in Q*Bert: Rebooted to keep you playing for hours, and even longer if you’re set on obtaining all the achievements and getting every star.

The game’s art direction is also fun. Q*Bert: Rebooted is full of bright colors, and the cartoon look makes it suitable for children. The music in the game is fun, as well.

Q*Bert: Rebooted is a must for fans of the series. No only because it’s a well-done update to the game, but because it also includes Q*Bert: Classic, which will likely bring back some fond memories for many players. For others new to the game, it provides a challenging experience that forces you to think outside the box in order to outwit your enemies, and hone your hand-eye coordination. It can be very challenging at times, but the reward is that much greater when you succeed.

Q*Bert: Rebooted is available on Xbox One, Playstation 4, Playstation 3, Google Play, The App Store, and Steam. For more information, you can visit SidelineAmusements.com.