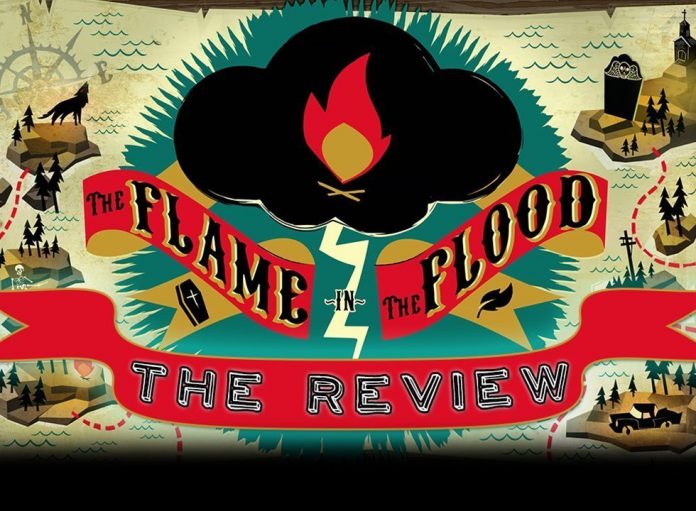 If you absolutely love survival games, The Flame in the Flood is for you.

The game is a survival game in the purest sense of the word. Surviving is not easy – especially when you’re riding the river in a post-societal America.

If you’re unable to view the video – As a player, you control Scout, a young girl looking to make her way through the world (or what’s left of it). You’re not alone on your journey, either. Scout finds companionship in a dog named Aesop, and the two explore together, rafting down the river and looking for supplies.

As you journey, you will have to keep a watchful eye on Scout’s needs: her hunger, thirst, warmth, and fatigue. If any of these drop too low, Scout will die. You replenish these needs by eating food, finding water, equipping clothing, and sleeping – and there are many ways to do this.

When rafting downriver, you need to keep Scout safe and dry, avoiding treacherous rocks and other floating hazards. If you run into something, your raft sustains damage. Too much damage, and Scout drowns. You can repair and upgrade your raft at Marinas, and there are other places to stop for supplies, like campsites and churches.

Obtaining items in The Flame in the Flood is relatively straight-forward and logical. For example, you need cattails to make rope, and rope to make a snare, with which you can catch a rabbit, to cook for food, and use its fur to make a pouch to expand your inventory. It’s not always that obvious, and you do require other items in this process, but it’s easy enough to follow. The game has a very helpful guide to creating and unlocking items for the crafting process, and whenever you select an item, The Flame in the Flood tells you what you can do with it.

I really enjoyed my time with The Flame in the Flood, but I have some reservations. The game is hard. Don’t get me wrong, I realize we’re talking about a survival game, but this is one of the most difficult and unforgiving games I have ever played (and I played on the “easy” mode). Because the path you take downriver is procedurally generated, you never know what you’re going to find. This means you may or may not find what you’re looking for when you hop off your raft at a stop. It can be very frustrating.

Making the game more difficult are wild enemies, like the boar, wolf, and bear.  You can kill these enemies, but all too often you die before obtaining the means to do so. Boars make for good eating, but they’ll also break your bones by charging at you. Similarly, wolves will bite you – leaving lacerations. Untreated lacerations become Staph infections, and untreated Staph infections result in Sepsis. It’s hard to find the necessary materials in The Flame in the Flood to treat these conditions – and since it’s procedurally generated – it’s all up to chance.

The Flame in the Flood‘s art style belies how tough of a game it really is. It looks unique, yet melancholy, and the haunting soundtrack from Chuck Ragan invokes feelings of a time gone by. If Mark Twain’s Tom Sawyer was set in a post-apocalyptic America, it would probably look a lot like The Flame in the Flood.

Overall, The Flame in the Flood is a very fun experience. You develop a sense of personal responsibility to Scout while you play, which makes it that much more upsetting when she dies. The developers, The Molasses Flood, even found a way to integrate some real narrative in the game with Scout’s interaction with other survivors. However, many players will find The Flame in the Flood too difficult to be accessible. The Molasses Flood needs to create a more forgiving difficulty level. Aside from that complaint, the games is wonderfully complex and challenging.

There are two game modes: Campaign, and Endless. The former takes you on a journey with some consistent encounters, while the latter can go on forever (well, until you die, anyway). Of the two difficulty modes, the easier version saves at checkpoints and if you die, you respawn at an earlier checkpoint with full stats. In the more difficult mode, death is permanent. Similarly, if you die in Endless Mode, you will need to start over from the beginning. These decisions means there’s great replay value in The Flame in the Flood.

I spent several hours playing The Flame in the Flood on Xbox One, and will continue to pour more time into it. The only thing that invokes more emotion than when Scout dies, is when she succeeds and survives. It’s extremely rewarding.

The Flame in the Flood is available now on Xbox One, Mac, and Steam for PC.