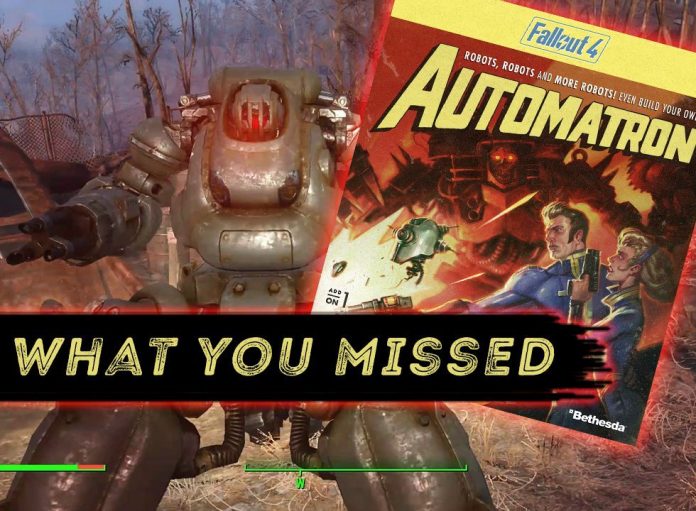 This week, Fallout 4 developer Bethesda dropped a bomb on fans, finally revealing some of their plans for upcoming downloadable content (DLC). We take a closer look at what you might have missed in the announcement for DLC pack #1 – Automatron.

If you can’t view the video, Automatron is slated for release in March. Though potentially less than a month away, Bethesda did not include a lot of details in their announcement, aside from stating “the mysterious Mechanist has unleashed a horde of evil robots into the Commonwealth, including the devious Robobrain. Hunt them down and harvest their parts to build and mod your own custom robot companions. Choose from hundreds of mods; mixing limbs, armor, abilities, and weapons like the all-new lightning chain gun. Even customize their paint schemes and choose their voices!”

So, for Automatron, we know we’re facing a robot invasion due to a villain named “The Mechanist.” It’s not clear if we’ll go to any new areas in this DLC, but the wording makes it seem like we’ll be fighting the robot menace on our old stomping grounds in the Commonwealth. This would be a little disappointing if there’s no new places to explore. In the poster for the DLC, we see a menacing robot-man in the background. Is this the first glimpse of our villain?

Just behind an Assaultron being blown to bits is our likely new villain. He’s clearly part machine, part man – and he’s large. Maybe not Liberty Prime large, but definitely larger than a typical suit of power armor (incidentally, over his left shoulder, there’s a ring used to support armor during repairs). With those glowing-red eyes, the Mechanist is certainly intimidating.

If he is part machine and part man, this kicks open the door Conrad Kellogg cracked with his cybernetic implants. With the new DLC, we will probably be able to equip implants on our characters, just as we were able to do in Fallout: New Vegas, among others. That’s pretty exciting, and it also explains why we found the cybernetic brain augmenter, cybernetic pain inhibitor, and the cybernetic limb actuator on Kellogg’s corpse. Currently, we can’t do anything with them – but when Automatron drops, we may find a new use for them. Lending more clout to this theory is the fact that the bits recovered from Kellogg have a value of 250 caps – a bit much for just a simple storyline device.

The addition of Robobrains is exciting. I have missed them since Fallout: New Vegas. They were very colorful enemies. This also has me wondering if we will see other robot enemies that are new to the Fallout universe. In a way – I’m sure we will. If we are hunting down robots threatening the Commonwealth and harvesting them for parts, it implies the robots are built differently. They could be procedurally-generated, in the same sense not every raider or gunner has the same equipment. Robot enemies could be equipped with different armor and weapon parts. This would provide a different experience every time we engage them.

The prospect of building our own robots is an exciting addition to Fallout 4. It remains to be seen if we will be able to mod existing robots like the delightfully-lethal Codsworth, but we will at least be able to Frankenstein something together from the parts of our vanquished foes. Bethesda’s wording in their announcement also indicates we will be able to have several types of robotic companions (assaultrons, robobrains, eyebots?), not just the massive Sentry Bot companion in the promotional screenshot below:

You can see a lot of modifications to the standard Sentry Bot design in the image. Most notably are the addition of large bags, presumably for carrying gear (so we’ll see different mods that boost certain aspects of our robot companions). There are also differences in the armor, and a bright, blue glow visible on pegs located on the Sentry Bot’s back. This could be related to the Tesla power armor we’ve seen in Fallout: New Vegas and Fallout 3. His left hand is octagonal, indicating he may be wielding a Super Sledge as a hand. Sentry Bots traditionally have machine guns or rockets for hands, so this is potentially a big change.

If we look right next to the robot companion, we see the Sole Survivor – but something is different. Look closely at the armor. It looks as if it has been pulled from destroyed Protectrons and Assaultrons – the helmet in particular looks like an Assaultron’s face. The Sole Survivor’s torso armor also appears to have been cobbled together from Sentry Bot parts, and the armor looks robotic in general, complete with several coils sticking out from it. It would appear The Mechanist is not the only one who knows how to build things from scrap. So in addition to a new armor type, what other secrets does the new DLC hold?

Speaking of scrap, Automatron may finally answer one of the mysteries bugging me from since Day One of playing Fallout 4 – The Robotics Disposal Ground. Located to the Northeast of Sanctuary Hills, the area contains a derelict Sentry Bot that you can activate – at your own risk. Once he’s been turned on, he simply patrols the area. In a small building on the property, there’s a computer that contains a delivery log from the site. Many of these deliveries are strange – “15 Protectrons, missing all limbs,” “14 Eyebots, vision sensors missing,” “12 Protectrons missing all limbs.” Employees at the disposal yard also find them odd, commenting on them in the computer’s log, wondering if robots are building robots. If you examine the details of the patrolling Sentry Bot’s information, it reads:

“If you are not a member of <REDACTED> or an associate of this prototype’s owner, <REDACTED>, you must destroy this holotape IMMEDIATELY and deny any existence of it or the accompanying Prototype.”

Well, that’s comforting. Curie advised me to leave the robot alone as it was likely guarding personal property – but whose? It’s quite possible The Mechanist had been building an army of robots even before the Great War. Sure, that’d make him over 200 years old (if he’s even human), but hey, weirder things have occurred in the Fallout universe (that’s about the same age as the Sole Survivor). Perhaps The Mechanist’s lair is hidden in the Robotics Disposal Ground, or is located nearby? Who knows.

These are just some observations from what little we know about Fallout 4’s first pack of DLC. Bethesda has traditionally released a trailer for each game expansion, so we’ll have more details when that drops sometime between now and the yet-to-be-announced release date in March. We’ll keep you updated on developments regarding Automatron.