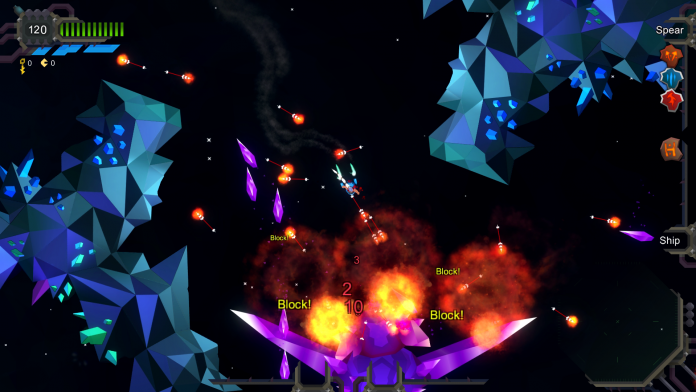 Blacksea Odyssey has you covered, especially if you are in the mood for a little space fishing.

The team behind the scenes is excited to announce that they are launching their Early Access Campaign on Steam as of today, March 2nd.

Strategy coupled with patience will see you make your way through gruelling levels to win the competition which that will lead you to the ultimate boss fight – the Titan of the Stars. Blacksea Odyssey – a top-down shooter about hunting giant space creatures – is coming to PCs and consoles Spring 2016. Play as the cybernetic Old Man who has entered the deadliest competition in the galaxy – the Blacksea Odyssey! Four of the bravest huntsman compete in capturing bounties for the largest space creatures that exist! Only the sole champion of the competition is awarded the honor of encountering the Titan of the Stars! Legend says no one has ever lived to tell a tale about the Titan. Will the Old Man be the first?

Blacksea Odyssey features rogue-like elements including permadeath, procedurally generated levels, and a steep difficulty curve. Gameplay revolves around massive boss battles in which the player hunts giant space creatures over five times the size of the screen. An expansive customization system which allows for over a million rune builds enables the player to hunt as they please. The fully destructible environment makes for dynamic combat. Lastly, the player can rip enemies apart piece by piece using the harpoon mechanic.

Not familiar with the Early Access system? Here are a few details to explain the process to you:

“YOU can be a part of the game’s development! Blacksea Odyssey will be updated EVERY WEEK after receiving bug reports and design feedback from you all. We Twitch stream the development weekdays from 12-2 pm EST. Early Access players play a huge role in forging the future of Blacksea Odyssey! Join us on this creative adventure!”

Approximately how long will this game be in Early Access?

How is the full version planned to differ from the Early Access version?

“Blacksea Odyssey v1.0 will contain a complete assortment of Spear Runes, Ship Runes, Consumable Items, Unlockable Spears, and Unlockable Huntsmen. Each spacescape will be completely realized and jam packed with colossal space creatures to hunt and prey upon!”

What is the current state of the Early Access version?

“Early Access will launch with Blacksea Odyssey v0.4.5! It includes all of the core gameplay systems and features! It may contain bugs, balancing issues, and unpolished assets. It launch with about half of the game’s content, but we will continue to add more content each week! Implemented features include:

Will the game be priced differently during and after Early Access?

“Nope! It will cost the same during and after Early Access!”

How are you planning on involving the Community in your development process?

“We post weekly updates that outline what’s new in each build! We then encourage the Community to send us bug reports and feedback by email, posting in the Steam discussions forum, or joining us on our Twitch stream. Through these outlets, we can create a dialog with our players in order to see what changes need to be made in the next update!”