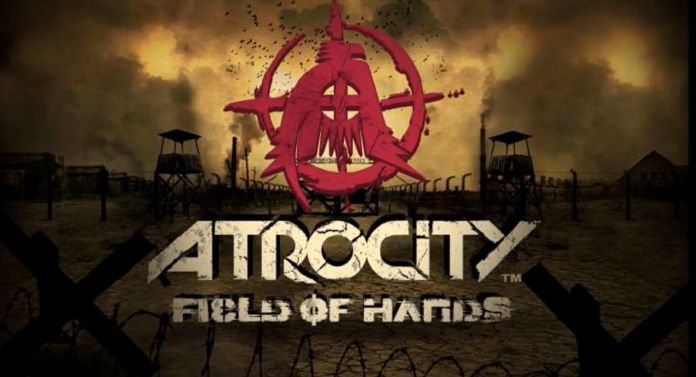 We have been hearing whispers coming out of camp Cold Furnace for some months now. Rumors of a new AAA experience that will force you into gut wrenching, morally compromising situations and leave you with severe emotional backlash.

‘The Undying’ which was the working title for Cold Furnace’s current project, has been creeping up on us like a story eerily unfolding, and now today we finally get a taste of what we are in for. March 22, 2016 (Fredericton, NB) – Today, Cold Furnace Studios announced their debut game, Atrocity: Field of Hands, in development. Previously under the working title of ‘The Undying’. Atrocity brings a franchise to the Studio, while Field of Hands is their first title in the series.

The road to hell is paved with good intentions.

Field of Hands is a military themed FPS, set in the backdrop of a war-torn conflict. A historical horror, you are immersed into a tense and morally ubiquitous story. Your choices will affect you, and thousands of others. Atrocity: Field of Hands is a grim look into the face of war. www.atrocitygame.com

“Atrocity: Field of Hands is set to terrify & immerse you”- EXL Gaming

We are an Atlantic Canada based video game developer Cold Furnace Studios. Our mission is to produce multi-platform games, with mature rated experiences, and intense storytelling at its best!

The Studio’s team is comprised of experiences that range from the AAA game industry, to military veterans and currently serving members.

Pictures can tell a thousand words apparently, and in this case that is very accurate. The below trailer is a brief look into the atmosphere of Atrocity: Field of Hands which places you in a war-torn setting that somehow through the minimalistic setting of the footage manages to capture a sense of urgency, fear and desolation.

Short and still mysterious, however if you look close enough there are many details given away in the trailer that can provide scene setting and creative direction. Previously this is the only image that we have seen to give us any idea of the direction that the game is heading in, along with the working title of ‘The Undying’, however we now know the meaning behind this image is to represent the tension and fear in the game, and just how close you are to your own fate.

The dark undertones and taste of raw reality that Atrocity: Field of Hands is going to bring to the table are now starting to become very apparent.

The music featured at the end of the trailer, which is also very dark and dramatic, is from home grown local talent SpineSplitter, and if you would like to hear more you can check them out on their official Facebook page.

When speaking exclusively with EXL Gaming, Max Rampage – Community Director for Cold Furnace Studios, he had this to say about what we can expect from this franchise in the future which will be releasing on multiple platforms:

“Gamer’s can expect the opportunity to relive the horrors of specific conflicts in history. Specifically, the dirty underbelly of history that nobody is comfortable with.”

“There is also a literal meaning to field of hands, but that we are keeping quiet about.” With his background in military leadership, as well as combat experience, Mark has thrown himself out of a few airplanes, and smashed his lips off the ground. #Airborne

Mark has been deployed in several international conflicts, including multiple tours to Afghanistan as well as the Balkans. He runs a tight ship, seeks realism, and quality in video games.

He uses his experience to deliver amazing games, and run an amazing team, Cold Furnace Studios. Lori builds games. Lori also builds teams from the ground up, ensuring the effectiveness of the team through collaboration.

Lori creates military based fiction, combining her security training, and creativity into realistic and engrossing experiences.

International law enforcement and security organizations have worked with her in understanding and preparing for virtual world culture and threats to games associated with crime in online gaming. Lori has contributed to the INTERPOL Working Party on Information Technology Crime, regarding Gaming and Virtual Worlds.

Before joining the game industry in 2007, Lori was employed by the Government of Canada, and responsible for system design and security architecture. Educated at the Royal Military College of Canada. BA in Poli Sci and midway through an MA in International Relations. 11 years of military experience as an Army Officer in the Combat Arms.

Raised during the greatest era of video games, my handle is Max Rampage and I am the smack talker introducing you to Cold Furnace Studios: a start up game developer headquartered in Fredericton, NB, Canada.

Our vision is to harness the experiences of our Ex-military execs and the talent of our Ex-AAA technical staff to produce a gripping fully immersed gaming experience. Built from the grass roots with the freedom and capability to put our imagination to code as we desire. We want to challenge the big game industry with a product whose depth, feel, and play stands next to any top game.

Come join the team locally or online at Cold Furnace Studios: founded on military ethos such as loyalty, respect, and teamwork. Jeff Mundee has worked in the video game industry for over ten years. He began his career in Vancouver with Factory1 Games, where he became well practiced in game design and environment modeling. He then worked with Electronic Arts for three years as a motion capture specialist; he worked on many popular EA titles released from 2006-2009, with notable highlights including: Fight Night Round 3, FIFA, Dragon Age, Skate, Dead Space, and Need For Speed. Jeff then became a mission designer at United Front working on an Activision game, which was later published by Square Enix as Sleeping Dogs. All the while Jeff has worked on several other indie, mobile, and gamification projects. I’m Terry Sznober. I started programming my first computer, The Tandy Color Computer 2, at the age of 12. I was really drawn to being able to make it draw graphics and was also a big fan of video games (Atari 2600, Sega Genesis, Nintendo NES). On that computer I learned BASIC, then Assembly Language for the Motorola 6809 processor, then C. My next platform was the PC. There I learned more C and then C++. In the early ’90s I discovered the “demoscene” (https://en.wikipedia.org/wiki/Demoscene) and started to learn and even invent some real-time 3D graphics effects through software. I created my own demo group called “Bodies In Motion” and made a few small demos, as well as releasing source code tutorials on the BBS’s and early Internet.

In 2000 I left NBTel Internet to join Sandbox Studios as game programmer. I worked on 2 published titles: Hoyle Card Games for the Nintendo Gameboy Advance, and Blast Lacrosse for the PlayStation. I also got to work on early Gameboy Advance prototype hardware that was about the size of an iPad mini as we known them today. About 15 years have passed since then and I worked on all kinds of software systems for companies like Innovatia, Bell Aliant, Atwood Technology, Encore Interactive, and now IneoQuest Technologies.

I also am part of two new startups: Yimbie (http://yimbie.ca) and serve as the CTO, and Cold Furnace Studios (http://coldfurnace.com) where I serve as the Lead Game Dev Director. Recent graduate from St. Thomas University in the disciplines of: Communications and Public Policy, Media Studies, and Film Studies, with a minor in Psychology. Recently enveloped into the fold at Cold Furnace Studios as a Press Release Manager. I’ve always had an affinity for video games and film, and having the opportunity to be a part of this industry has become a dream come true, this start-up company will invest the skills of industry trained professionals, in order to revolutionize the industry. I also co-host a radio show on CHSR 97.9FM “Gamers of the Round Table”, my handle on the show is “Big Fish”, we’re broadcasting every Wednesday at 5pm-6pm, give us a listen and in that hour you’ll be thoroughly entertained. Scott is a writer that is on a journey. His writing has a bit of a tragic gritty feel to it and seldom ends as one might hope.

His writing focus seems to take a look at the depths of the human condition and perception based realities.

He has a few short stories published and has served on the selection board for a writers group. You can get in contact with Cold Furnace Studios at: