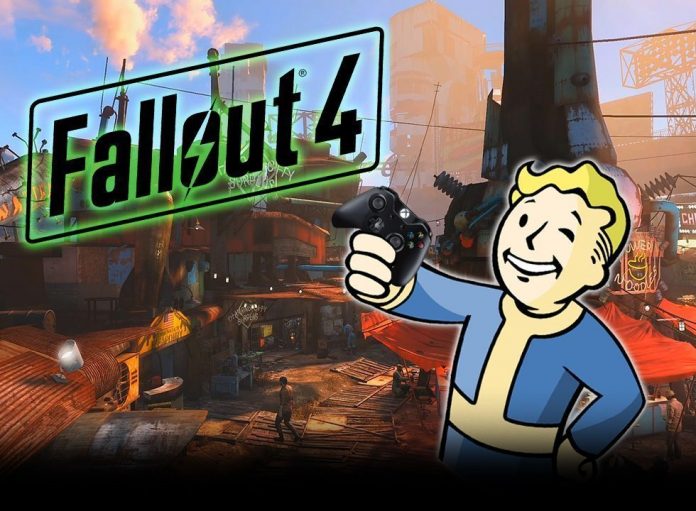 While exploring in Fallout 4‘s first expansion, Automatron, I found a bit of an easter egg in The Mechanist‘s lair. It’s probably just something silly left by one of the Fallout 4 developers at Bethesda at the end of a long day. Jangles the Moon Monkey and that creepy cymbal monkey appear to be hanging out in front of a television with controllers in their hands, enjoying some room-temperature Nuka Cola Quantum. It’s a fun reference to “couch” co-operative games, but it also brings to light the biggest thing missing from Fallout 4: co-operative multiplayer.

Fallout 4 is one of the most robust games ever created in terms of replayability and personalization. Aside from a great narrative campaign and a sprawling open world, Fallout 4 features a fully-fledged and modular crafting system. This system allows players to not only customize their weapons, but customize settlements in the Wasteland. Players have built some amazing structures. The open-world role-playing shooter is considered a massive success.

Yet, one thing remains clearly absent from Fallout 4, and that’s some form of online component. It seems a terrible waste to give players such wonderful tools to create things, and then offer them no way to share them with the world. I remember when Fallout 4 was announced and Bethesda’s Todd Howard was promoting the game at E3, showing off all the cool things you could do. I was sure co-op was in the cards, until it wasn’t. Bethesda has relied on third-party apps (like Playstation 4’s and Xbox One’s built-in video clip recorders), to do the sharing for them. Some people are so desperate to share their creations, they will buy an expensive personal video recorder (PVR) just to make their content more accessible. The writing is on the wall for Bethesda, so how long can they afford to ignore it?

It’s a whole different experience to explore another player’s world in-person, rather than through a curated video tour. Other games – like Minecraft – thrive on the ability to create, share, and co-create things with other players. Fallout 4 clearly takes a page or two from Minecraft‘s game design, so why not add a multiplayer experience?

To be clear, I’m not referring to player vs. player multiplayer. Instead, Fallout 4 would benefit from a co-operative mode. Imagine being able to share your settlements with friends, or explore theirs. Exchange ideas or work together to build a massive object. Bethesda continues to offer more customization and building options in downloadable content (DLC). Fallout 4‘s second expansion pack Wasteland Workshop is supposed to give players even more tools to create their settlements. On top of that, imagine exploring the Wasteland with your best friend, instead of a NPC companion. Don’t get me wrong, characters like Nick Valentine, Curie, and Codsworth are wonderful – but sometimes I want to play with a real friend.

Some of the biggest criticisms against such an idea revolve around the arguments “people don’t want co-operative” or “Fallout has traditionally been a single-player game.” In truth, neither of those statements is accurate. Ubisoft’s hit game The Division generated $330 million dollars globally in its first five days, and that’s as an unestablished franchise. The Division is predicated almost entirely on co-operative play. Literally almost every one of my friends on Xbox One plays it, and they all love the co-operative experience. There’s something immensely rewarding about taking down bad guys with your buddies. Wouldn’t you feel better facing a Super Mutant Behemoth with your buddy at your back?

And Fallout does actually have a history of multiplayer experiences. Fallout Tactics included a multiplayer mode, and back in 2008, Bethesda licensed the rights to make a Massively Multiplayer Online Role-Playing Game (MMORPG) set in the Fallout universe to Interplay. After a contract disagreement, Bethesda sued Interplay, resulting in the fledgling Fallout Online and all rights in the franchise transferred to Bethesda. Similarly, Bethesda recently released the MMORPG The Elder Scrolls Online. The game was a success, but I feel the Fallout universe is more accessible to a wider range of gamers.

Some people may also say that since Fallout 4 was not built as a multiplayer game, it cannot be made to support it. I would disagree. In fact, other games that were not designed for multiplayer experiences have seen it added later on. One in particular is Just Cause 2. Just Cause 2 suffered from the same problems facing Fallout 4: It’s an immensely fun game with no one to share it with. The developers behind Just Cause 2 weren’t willing to listen to fans, so the fans did what any rabid fans would do, and actually modded the game to support multiplayer. Since Just Cause 3 also didn’t include multiplayer, the same group is working on another multiplayer mod.

You’d be hard-pressed to come up with a reason why cooperative gameplay would not improve Fallout 4’s experience. Plus, it would be optional – if you don’t like it, don’t participate. Fallout 4 generated $750 million dollars in sales on release day. Several game storefronts reported Fallout 4 as the most preordered title of the year. At launch, the game had over 470,000 concurrent users on Steam. There’s probably a good chunk of those people who would like to play together.

Perhaps the couch co-op easter egg means Bethesda is at work on adding some kind of online component to Fallout 4, perhaps we’ll finally get to see a Fallout Online game in the near future, or perhaps it was just a fun easter egg left by one of the Fallout 4 developers at Bethesda at the end of a long day. Take your pick.