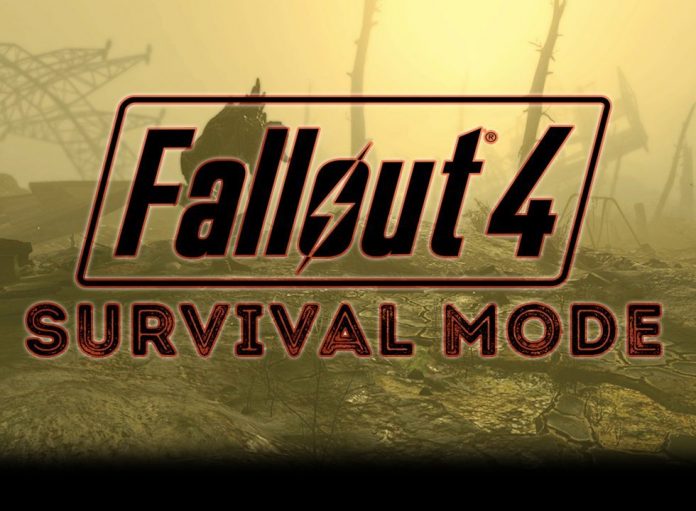 The release of Fallout 4‘s first pack of downloadable content, Automatron, likely brought a lot of players back to the Commonwealth. There will soon be another reason to wander the Wasteland: a revamped Survival Mode.

Fallout 4‘s survival mode is designed to be as realistic as possible, and in a post-apocalyptic world, that’s going to be difficult. Publisher Bethesda detailed the new mode in an announcement on Tuesday.

If you can’t view the video, here’s what you’ll be facing in Fallout 4’s new Survival Mode.

Bethesda says they want to force players to make interesting choices, by bringing more contrasting motivations to Fallout 4 using the type of circular systems you might find in a game like Dark Souls. (Circular systems are two or more systems that push against each other.) The result is the four major pillars of this new Survival Mode:

How do these goals manifest in Survival Mode?

Saving with Sleep: Manual, quicksaving and almost all autosaves are disabled. To save your game, you’ll need to find a bed and sleep for at least an hour. This means your fallback options are reduced, forcing you to be more concerned about what you are walking into and whether you’re prepared to handle it. Some fights you may deem above your level and decide to avoid. Other fights you may decide to go all in. Scouting and gathering information to make this decision can be fun in its own right. Also, when beds are your only means of saving, they become the Holy Grail. With that level of importance tied to them, you will scour the Earth to find the closest bed to your next chosen encounter – and in doing so you will likely discover things that you might have otherwise missed.

No More Fast Travel: Fast Travel is disabled. If you wish to be somewhere, you’ll have to get there the old-fashioned way. In other words, exploration is now mandatory, exposing more of the Commonwealth’s secret gems. This will also take you out of your comfort zone, but encourage you to take advantage of the well-placed workshops throughout the Wasteland. And, while Charisma may seem less important to your immediate survival, there are certain Charisma-based perks that make managing your bases less painful.

Increased Lethality: You now deal, but also take, more damage. You can increase the damage you deal even further with “Adrenaline” – more on that in a moment. This makes combat more dangerous, which in turn slows you down and gets you to think about what you’re walking into. Combine this with it being much harder to save your game and suddenly each encounter becomes much more tense and dire.

Combat More Strategic: Because both you and enemies are more powerful, this means fights are about trying to use positioning and timing to get in your shots without taking enemy hits. This has an even bigger effect on melee players, who will now need to use their block/parry to keep themselves from taking damage during fights. While this change raises the skill necessary to play, those who opt into Survival know what they’re getting into.

Facing the Unknown: Threats, unless added by a Recon scope, no longer display on the compass, and the distance at which locations of interest will appear has been significantly shortened. You can no longer rush through the world, knowing what’s around the next corner. At the same time, you’ll likely explore even more, in order to ferret out any and all locations.

Adrenaline: Adrenaline, a new Perk that comes standard with Survival Mode, provides a bonus to your damage output and is increased by getting kills. Every five kills increases your Adrenaline rank, adding 5% bonus damage for up to an extra 50% damage at the max rank of 10. That extra damage is alluring. Adrenaline motivates the types of stupid decisions that always lead to the best water cooler stories. (Sleeping removes anywhere from 2 to all 10 ranks of Adrenaline, depending on the time you’ve slept.)

Wellness – Exhaustion, Hunger, Thirst: You’ll find it difficult to survive without taking proper care of yourself. You must stay hydrated, fed and rested to remain combat-ready. Going for extended periods of time without food, water or a good night’s sleep will begin to adversely affect your health, hurting your S.P.E.C.I.A.L. stats, adding to your Fatigue, lowering your immunity, and eventually even causing physical damage to you. This will affect every decision you make, because you have to consider your overall and ever-changing health. The drive to simply stay alive might push you into new and unexpected adventures. At the very least, you’ll likely find yourself hunting for valuable meats, triggering encounters with dangerous wildlife. But not everything you can consume is good for you: Certain items in the game now have negative consequences to balance out their positive effects. These counter-effects may make you thirsty, hungry or tired and possibly even hurt your immunity, leaving you vulnerable to Illness.

Fatigue: Fatigue mostly comes from being tired, but both hunger and thirst also affect it. Fatigue works like radiation, but affects your Action Points (AP) rather than your Hit Points (HP). The more Fatigue you’ve built up, the less AP you’ll have for actions like sprinting and V.A.T.S. The amount of Fatigue you’ve accumulated is displayed in red on your AP bar. Bethesda also took significant steps to challenge what you value in Fallout 4. Now, even small decisions can have big consequences. They also made adjustments to all kinds of items and conditions.

Bed Types: The type of bed you’re sleeping in limits the length of time you are able to sleep, thereby limiting how much you can recover. Real beds – which are hard to come by in the world – offer the highest bonuses for sleeping; this rewards you for working out of a home base or even spending the caps for a good night’s sleep. Also, finding a sleeping bag in the middle of a dungeon will feel great… finding a dirty mattress will feel even better… finding a real bed will be like winning the lottery. You know all those spots where you can use Workshop mode in the game? It’s time to start building beds.

Illness & Antibiotics: There are several different Illnesses that can affect you. Your base chance of getting sick increases as your average Wellness decreases. Antibiotics can be crafted, bought or found, and alongside doctors, can heal your current Illnesses. Certain things in the world, such as taking hits by certain creatures or using Chems, may immediately give you an Illness. Also, Stimpaks are no longer the fix-all miracle drug, so make sure you’re prepared!

Immunodeficiency: Items that cleanse your body of Rads come with the cost of making you tired and temporarily damaging your immunity, leaving you more vulnerable to Illness than usual. By adding a negative effect to RadAway, Bethesda is pushing you to only use it when you really need it.

Slower Healing: In Survival, restorative items, like Stimpaks and food, recover your health at a significantly reduced rate. You’ll need to time your healing precisely if you hope it will last.

Crippled Limbs: Crippled limbs will no longer auto-heal after combat. They will remain crippled until healed by a Stimpak or slept off. This not only makes combat tougher (and more strategic) but also puts a further tax on Stimpaks.

Carry Weight: Your total carry weight has been reduced and items like ammo and Stimpaks now have weight. Bullets and shells have a small amount of weight, which varies by caliber, while missiles and mini nukes are quite heavy. Everything you carry now must be carefully chosen, and you’ll have to weigh power over volume when it comes to things like ammo.

Painful Encumbrance: Exceeding your carry weight reduces your overall Wellness, quickly building Fatigue, and will eventually cripple your legs. You can’t hoard a whole bunch of items, then make the long, slow trip back home – which, to be fair, isn’t that fun. Just set the loot aside and be free.

Companion Costs: Carry weight for companions has been decreased and they will no longer automatically get back up if downed during combat. Instead, they will return home, if abandoned without being healed. So don’t hog your Stimpaks, and don’t turn your friends into mules! Likewise, if you’ve already downloaded Automatron, your new Robot companions will need to be closely monitored. If you forget to use your Robot Repair Kits, they will return home.

Enemy and Loot Repopulation: Locations you’ve cleared will now repopulate with new enemies and loot at a significantly slower rate. So head out into the world and find new locations!

If you combine all these elements, Fallout 4‘s new Survival Mode shatters the preconceptions about the game. Fallout 4 is no longer about prancing about the Wasteland and pistol-whipping Deathclaws – Survival Mode changes it into a totally new, and totally visceral, survival experience.

Bethesda Game Studios’ Game Director, Todd Howard, puts it poignantly, “Taken together, it creates a Fallout experience unlike before. You feel the wasteland.”

You feel the Wasteland. It is unforgiving.

Fallout 4‘s revamped Survival Mode is the brainchild of two Bethesda designers, Josh Hamrick and Jon Paul Duvall, who used an internal Game Jam to visualize what an overhauled Survival Mode might look like. Because of their Game Jam success, Bethesda then added several programmers, who worked together to make the new mode a reality.

Fallout 4‘s new Survival Mode is currently available in beta on Steam. Player feedback will be incorporated into the mode, refining it for console release. Bethesda has yet to set a date for the revamped Survival Mode’s release on Xbox One and Playstation 4.