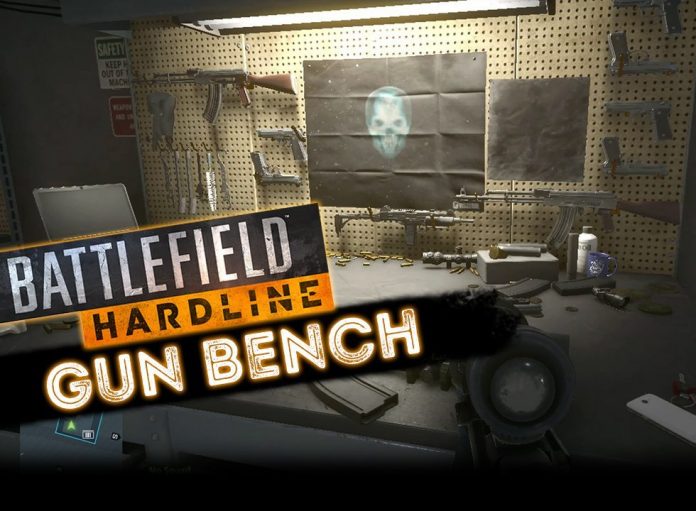 As a loyal Battlefield Hardline Premium subscriber, I was able to spend some time in the Gun Bench yesterday, and I thought I would share some of my experiences.

If you can’t view the video, Battlefield Hardline‘s Gun Bench is a great addition. You’re able to customize weapons in a more visual and less time-sensitive environment, compared to making changes to your inventory between deaths while in a match.

Players can now change detailed aspects of their guns, ranging from the camo, to the reticle, and even the reticle size and location on the scope. In addition, players are able to alter the appearance of the gun to make the paint job appear more worn or dull, if they desire. It’s a neat way to take more ownership and pride in your gun. While you edit the aspects of your gun, you can rotate it 360 degrees to see what it looks like from all sides. While in this menu, you can also add attachments to your gun, and it’s saved as a preset that appears in-game. It’s fun, but Gun Bench feels like it should have been there from the start.

Similarly, players can also customize their character’s outfits to a much greater degree. You can select different layers of the clothing and camo to customize. This actually might be useful on a tactical level, since you could outfit your player entirely in black. However, Betrayal actually gives you the option to disable other player’s customized outfits, which is a very nice touch. There’s also a locker as part of Gun Bench that allows you to edit your loadouts, so you’re always prepared.

Once you’ve customized your weapons and gear, you can take it out on the built-in gun range and test fire it at a variety of distances. It’s nice to get a feel for how the gun performs before you take it out in the field. If you don’t like how it handles, just go back to the Gun Bench and tinker some more.

Betrayal also added a couple new toys for you check out at the Gun Bench. The add-on includes:

It’s interesting to note that two of these guns are veterans from the trenches of World War I. The DLC also includes some more gadgets and vehicles, which may be enough to lure some players back to the battlefield. If you have a Battlefield Hardline Premium subscription, you should be able to download the new content from the in-game store.

Betrayal will be publicly available on March 15th. For more information, click here.