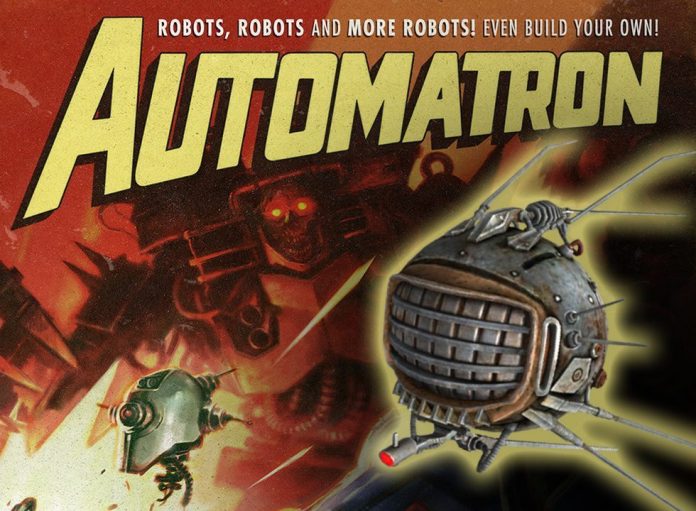 One of the big questions surrounding Fallout 4‘s first expansion Automatron was, “will there be Eyebots?”

The short answer is “yes,” though it’s not quite so simple. Here’s how to obtain your very own Eyebot in Fallout 4. Due to the nature of the downloadable content (DLC), some mild spoilers for Automatron follow.

Eyebots are present in Fallout 4‘s Automatron. However, you can’t have one as a companion – at least not in the same sense as Codsworth or the new robot Ada. Bethesda carved an interesting niche for the Eyebot, which many players probably won’t be over-the-moon about. Eyebots in Automatron are used as a way to locate materials, ammo, and explosives. If this sounds confusing, let me explain.

After solving the problem of The Mechanist and obtaining the Eyebot Pod Blueprints, you’re able to construct Eyebot Pods at outdoor settlements. Each pod contains one Eyebot, which you can send on a mission to locate a valuable resource, like copper, ceramic, oil, etc. The Eyebot then swoops away into the distance, locates the resource, and a marker is placed on your Pip-Boy map. You can then fast-travel to the location, collect the items, return to the pod’s location, and send the Eyebot out again. It’s definitely a let-down for those who wanted an Eyebot companion like ED-E from Fallout: New Vegas, but it’s also an extremely useful game mechanic. I’ve spent about 200 hours in Fallout 4 – so I know where most resources are located – but for more casual players, this is a great addition.

Unfortunately, it’s not perfect. Eyebots can only look for certain materials, and none of them are the one I need most: Wood. I hope Bethesda gives the Eyebot a software update in the future, allowing them to hunt for more resources.

Of course, you won’t be building any Eyebots without the pod blueprints, so here’s where to find them. After dealing with The Mechanist, exit through the control room door and take the first right. Hang another right, and you’ll find yourself in a room. The blueprints are on a table to the left. To build an Eyebot Pod, you’ll need:

Eyebot Pods require 6 power to operate, and must be placed at outdoor settlements. You’ll find it in the “Special” category of the Workshop Mode menu.

What do you think about Bethesda’s new Eyebot mechanic? Do you still want an Eyebot companion? Tell us in the comments.