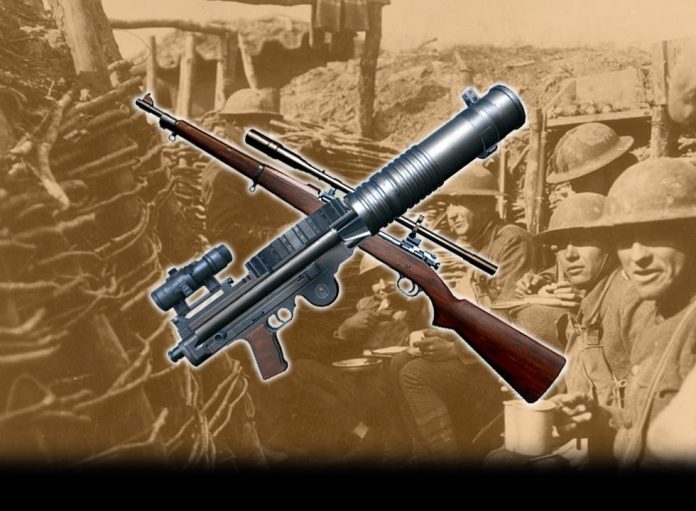 I’m excited at the possibility of a proper World War I video game.

With the release of Battlefield Hardline‘s new downloadable content Betrayal, we are given some tantalizing clues. These clues come in the form of weapons. Specifically the Springfield 1903 bolt-action rifle, and the “Syndicate Gun.”

If you can’t view the video, the Springfield 1903 bolt-action was the standard-issue infantry rifle of the American Expeditionary Force during World War I. Nearly 850,000 had been produced by the start of the war. It served on the front lines in both standard and sniper configurations, and had a five-round internal magazine. The gun was introduced in 1903 and still remains in-service today, as part of drill teams and marksmanship competitions. While it is true the weapon saw use during World War II (until phased out by the M1 Garand), its greatest employment as a weapon took place in the World War I. The gun is a veteran of the Battlefield franchise, appearing as a scout rifle in Battlefield 1943. What sets the weapon apart in Battlefield Hardline, is the fact it includes iron sights – standard for World War I infantry. The weapon’s configuration in Battlefield 1943 did not include a removable scope.

Similarly, the slick name “Syndicate Gun” belies the fact that’s a lot older than it sounds. Battlefield Hardline: Betrayal‘s “Syndicate Gun” is actually the Lewis Light Machine Gun. Invented in 1911, the gun was used heavily by British forces during World War I, and features a top-mounted “platter” magazine. The Lewis Gun was often employed onboard aircraft and as a support gun in the trenches. It featured either a 47 or 97-round magazine, and was capable of a withering (for the time) 500 to 600 rounds-per-minute. Like the Springfield, the Lewis Gun did see service in World War II, but in a much more limited role.

So, the inclusion of these World War I weapons in the new Battlefield Hardline DLC raises several questions. Why include them? Did the developers get bored with modern weapons? or is this a sign of what is to come?

I have already said in a previous article that World War I would be a great setting for a narrative truly worthy of the Battlefield franchise, and players have grown tired of futuristic warfare, jetpacks, and wall-running. We’ve yet to see an official announcement from Electronic Arts on the next Battlefield game, but these new weapons may be the “writing on the wall.”

What do you think?

We’ll update you as soon as EA makes an official announcement on the next Battlefield game.