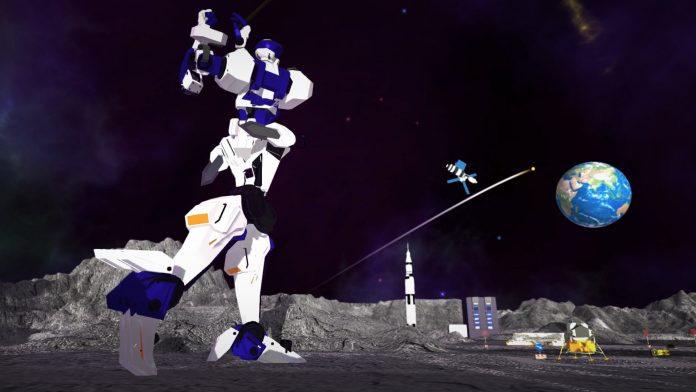 The PlayStation Experience in late 2015 was a joyous event for me. I met up with friends, saw the latest games on the horizon and experienced PlayStation VR (PSVR) first hand when I played Distance and EVE: Valkyrie. One of the games I didn’t get a chance to play, however did see on the main stage at the PSX VR presentation, was 100 Foot Robot Golf.

Yes, the game’s premise is as ridiculous as it sounds and the fact that something like this was even thought up blew me away. Now I am not a fan of golf at all however, I do love giant robots, especially when they are smashing things up. I also love games that throw caution to the wind as far as concepts go so I was immediately intrigued by 100 Foot Robot Golf. The concept is insane by itself and the addition of VR made it even more appealing to me.

Due to this I reached out to the creators of 100 Foot Robot Golf, so we can learn a bit more about how this magnificently crazy concept came to fruition.

Firstly, we need to know, what inspired the creative direction behind 100 Foot Robot Golf? “Panzer does Let’s Plays in her spare time, and was asked to guest commentate on a video of an incredibly boring golf game. They spent the entire time making jokes to keep it from being a total drag and ended up riffing on the idea of how much better it would be if you were playing golf in a giant stupid mech smashing everything to pieces.
After they finished recording, Panzer couldn’t stop thinking about how stupid fun it would be to play that kind of big robot golf game for real, so she pestered me for days. At first I thought it was a crazy idea, but after a few ideas I realised it was a crazy AWESOME idea.”
Was the vision for your game always to be a VR experience or were you approached by Sony with the idea?
“We were pitching 100ft Robot Golf to Sony as a TV-only game at first, and they came back to us to ask us if we’d thought about making it a PlayStation VR game. We hadn’t touched much VR at that point, so we crashed a friend’s place to try out the Vive, the Rift and PlayStation VR. Within a few hours, we went from “I’m so sick about hearing about VR” people to “Holy crap VR is awesome and we have to add VR support to our dumb robot golf game”.
Looking back on it, it was kind of a no-brainer. 100ft Robot Golf has “huge sense of scale” built right into the name, and the mechanics and speed of golf are perfect for VR play, even if you are able to move around and destroy a huge city at the same time.”
How many people make up the development team for 100 Foot Robot Golf, and how long has this game been underway for?
“In terms of people touching the game, it’s just Panzer and myself. We do however have some amazing concept and artists that we’re working with to make our robots and cutscenes absolutely ridiculous – I can wait to start showing some of our narrative stuff really soon!”

The release window for both the PlayStation 4 and PSVR versions of  100 Foot Robot Golf is later in 2016, with the PSVR version of the game obviously purchasable and playable after the release of the VR device in October 2016, however you don’t have to wait that long to try it out for yourself. No Goblin have now announced that they will be releasing the first TV gameplay and allowing people to actually try it out, in April.
It’s no surprise that the appeal for this game is as high as it is, with over 192,000 people already viewing the PlayStation YouTube trailer in the past 3 months. If you are not one of those 192,000 people you can check out the trailer below, along with two other videos that will give you a better look  at what you are in for and where the concept came from.
.
Being a VR experience the controls will obviously be a bit different from what we are used to, can you walk use through the game control system you are using?
“We give you full third person control of a golf playing robot, which is a nice change from the usual “warp to hole” play you get in golf games. On a TV we use a traditional third person control and camera model, but we have something special planned for VR – I promise that you’re not moving the camera with the stick or doing anything that destroys the presence of actually being the pilot of a huge robot.”
How can you best describe the experience gamers can expect and anticipate?
“It’s golf with 100 foot robots – it’s pretty much in the name. You can hit a ball with a golf club, knock down buildings that may be in the way of your shot, and experience what it’s like being a robot golf pilot.” Can we expect a non-VR version of your game, or will you be purely focused on development and support of the VR version?
“The “VR version” and the “TV version” are the same thing! On the main menu of 100ft Robot Golf, you can hit the Triangle button to swap between the two. There are some things that won’t translate (there’s no 4-player splitscreen in VR for obvious reasons, for example), but 95% of the game is the same.
The challenge on our end is building two different interaction models for TV play vs VR play, but since one of our last jobs was coming up with five different models for one game, it’s not as daunting as it seems.”
How different is the development process from making a game purely for console, versus a VR experience?
“Since we’re both a console and a VR title, it’s actually pretty similar. On a TV we have the ability for four players to play splitscreen, so performance-wise rendering two eyes isn’t our worst case to optimize for. Beyond that, the real challenges for us are maintaining presence in VR and building two control systems that are equally as easy to use.”
.
I am excited to see more of this game in April and ever perhaps get my hands on it for a test run so I can come back and give you my impressions. Trying to imagine yourself as a 100 Foot Robot playing Golf is a little tricky so I certainly want to get behind that VR headset and see this game in action for myself.
To hear more from No Goblin on their development processes and how this game is tracking along, be sure to tune into the Developers Workshop Podcast in April.