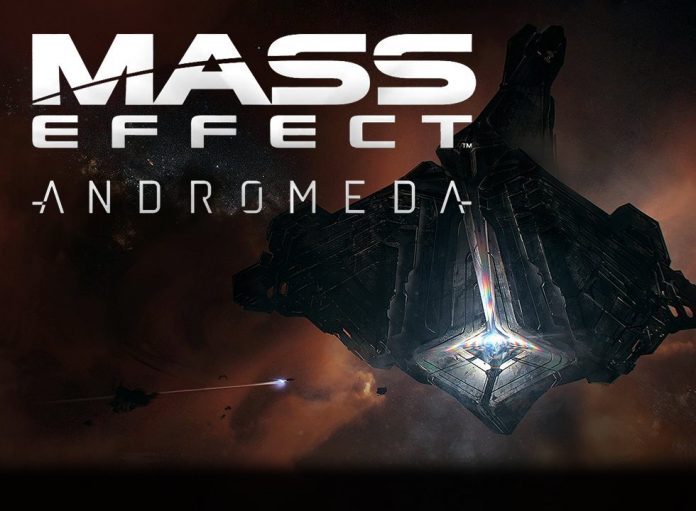 With some April Fools jokes fresh in our memory, another leak for Mass Effect Andromeda will be eyed with suspicion. However, Taker34’s recent leak on neoGAF isn’t raising any doubts on its legitimacy.

The leak allegedly contains video footage from an unnamed developer’s demo reel who is currently working on Andromeda. The clip contains a few seconds of gameplay and some visual effects.

Though only a few seconds long, it provides a wealth of new information, if it’s to be believed.

The reel includes establishing shots of an alien location. It screams “BioWare” in every aspect – from the framing of the shots, to the camera pans.

The unknown planet appears terrestrial, and the structure design is new, yet familiar. It’s similar to what we’ve seen on other planets in the Mass Effect universe, triggering memories of Cerberus facilities. In the footage, we’re lead to believe Andromeda‘s protagonist is landing on the planet to resolve some kind of issue. The ship used to land on the planet is new to Mass Effect as well, and appears to be a Systems Alliance design, significantly similar to the UT-47 Kodiak Drop Shuttle. The new ship has four engines, instead of two, and also appears significantly larger than the Kodiak. It’s certainly not Asari, Quarian, or Geth.

Four characters disembark the ship: two humans and two Krogans. One of the Krogans separates from the group, and is confronted by a human armed with a Carnifex-model pistol. The human is threatening an unarmed Krogran (which are ironically still dangerous). A tattoo is clearly visible on the human character’s face, though it’s meaning is unclear. Is it an enemy organization, similar to Cerberus? We just don’t know. However, it may also indicate facial tattoos are coming to Mass Effect Andromeda as an appearance option.

Rather than retaliate with a typical Krogan response like literal disarmament, the Krogran keeps his cool – thinking tactically and using what he is presumably there for to neutralize the threat. Smelly potatoes? According to the artist’s demo reel and subtitles, we’re actually seeing pollen plumes. The plume engulfs the would-be thief/assassin, and he is rendered unconscious. The question about why the two sides were ready to fight over the vegetables remains. If Mass Effect Andromeda is about finding a new home, such vegetables may provide food, and are thus indispensable to supporting life on new planets. We also see some very nice weather effects on the Krogan armor.

Unfortunately, the leaked footage is grainy, so we’re not able to get a good close-up of the assailant’s facial tattoo, but the animations (primarily the facial animations) are clearly a BioWare product. The armor is also interesting, and almost seems alive. It’s not like traditional Mass Effect armor in appearance, which is important to the reel’s authenticity, as Andromeda is allegedly set many years after the events of Mass Effect 3.

The following shot is important, because it shows the pollen does not seem to affect the game’s protagonist, or combat team. Why are they immune? Why is the Krogan immune? is it a plant native to the planet Tuchanka? We also get a good look at the more traditional armor seen in the Mass Effect franchise. It looks like the Krogan to the protagonist’s right is sporting a weapon with a large bayonet, while the character to the left may be toting a Mattock-type rifle.

Also in the reel, we’re treated to a scene that includes a jet pack. Jet packs were confirmed by Mass Effect Andromeda‘s first trailer, which shows a N7 agent jumping over rocks and into battle, so what’s special about it here? It’s honestly less about the jet pack, than what else is seen in the footage. First of all, we’re able to see an equipped weapon, which is clearly a Avenger assault rifle variant. We can see the weapon doesn’t have an infinite ammo count, sticking with the ammo system seen in Mass Effect 3. Visible on the Head’s-Up-Display (HUD) is the standard shield/health bar duo, icons indicating party members and powers, and something new – a snowflake meter.

This meter likely means different hospitality levels on planets in Mass Effect Andromeda, very similar to the original Mass Effect. So, players will likely have to improve their armor protection to handle extreme temperatures, or will have to balance their time spent in the elements. At the top of the screen, we see a compass which indicates objectives and locations, and also shows another icon – the Mako. The Mako ground exploration vehicle is supposed to be an integral part of Mass Effect Andromeda, so it’s not surprising to see this icon in the video.

So, there are some very exciting details hidden in the brief leaked footage. There is, of course, debate over if it is real or not, but Electronic Arts seems to have spoken. The company owns Mass Effect series developer BioWare, and filed a copyright claim on the video. Similarly, one person on the neoGAF thread who implied a connection to the game’s development, places the footage back in 2014, noting “it doesn’t look like this now.” The same user also claims “Internally it’s been called ‘the spiritual successor to ME1’ throughout its development.”

Based on the elements in the demo reel, I’d have to agree with his or her assessment. The focus of the footage outside of the Krogan conflict is clearly about exploration, and draws immediate comparisons to exploration in the first Mass Effect. It’s not much to go on, but hopefully this new leak will pique our interest until BioWare’s next official Mass Effect Andromeda announcement.

Mass Effect Andromeda is due out on Xbox One, Playstation 4, and PC in early 2017 – which means if this footage is two years old, I’m stoked for what is coming.