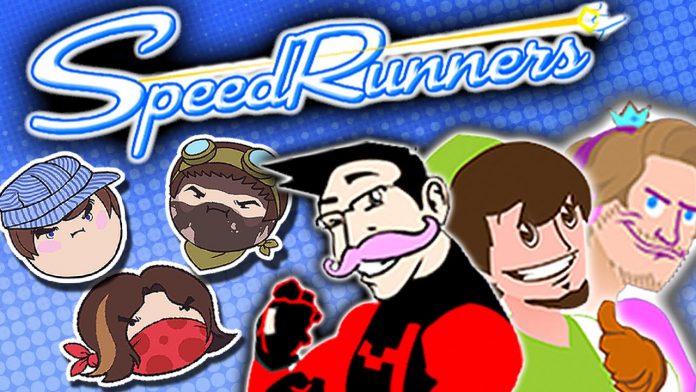 I haven’t had this much fun with a racing game in a long time. the premise behind the game is a ‘running man’ version of Mario Cart with colorful characters and you unlock power ups as you level up . You have an ice beam, hook shot, homing missiles, and boulders at your disposal. So many different over the top power ups all within a touch of a box.  You also have a very nifty hook that you can use to swing across white borders on the map. It almost reminds me of Bionic Commando. The more you can chain your swing the faster you go.
Momentum is the key to the game, trying to get as much speed as possible to cut off players from the map. You can use certain angles on the map to gain momentum or as mentioned before if you swing you can really speed up your momentum. You win matches by pushing players out side of the map, if they reach the far back border BOOOOM they are out.
If you are unable to view the video, please see a written version below:
You need to win 3 races  to win a round.  Memory is also going to be a key in this game. Just like any other racing game the routes you take can shorten times for victory, but be careful, just like other racers similar to this you can get hit by an enemies power up at any time. Timing also does come into play.  You need to time your jumps and use of power ups carefully. One hit too soon or late and you can waste a special or even worse  – hit a wall and stop your momentum completely which can result in a Game Over.   The speed is so fast when you get going you can lose where you are at on screen, especially if there’s a group of players close together. Sometimes when playing multiplayer games I couldn’t tell who I was which and ended up confusing my self with another player.  There should be better icons or light ups for players that stand out from the background, especially when the screen starts shrinking as the clock has been going on for a while. I think that would really assist with making it much easier to identify who you are. That’s also another thing I have never seen in other racers. When a lobby has either been racing for a while or its head to head, the field of view starts to shrink . I thought this was very unique. There are tons of unlocks and collectibles to get and another cool feature is the map editor mode so you can download maps created by others in the community or make your own to upload and share. I think this feature is fantastic and really adds to the reply value.
The controls are so easy to use on a controller and feels so natural and polished, however the default mouse and key controls felt a bit off (no one likes to use the arrow keys). Why that is the default control I have no idea why, however you do have the option to map the controls to be the way that you feel comfortable.
I did however, come across my share of bugs. Launching the game was giving me issues, it would initially launch with half the playable window out side of my screen and to fix that I would have to drag it over and then maximize. I was still having this issue even if I saved it to launch at full screen in the menus. The other main issue I encountered was the game would crash when trying to compete in multiplayer matches from time to time.
There isn’t much of a story, you are basically a SpeedRunner and challenge other characters to see whose the fastest runner, that’s it. This game is basically all based around multiplayer and as I mentioned before, I was crashing trying to get into those matches. Once you are in though the games do load up quite fast which is great as it gets you right to the action. Also do your home work before going online. There’s quite a few beasts on this thing, so if you want to keep up you need to know the maps. I played for quite a bit online and I had such a great time, even losing and spectating others had me at the edge of my seat . You see some of the craziest swings and jumps ever, very entertaining.
Overall I give this game a 8 / 10. The game is over the top fun. I can even see this being a e-sport in the near future. I can also see this being a reason to have a bunch of people over on a Friday nights, have a few drinks and go ape nuts on this game. Keep in mind though to play this as a local PC game doesn’t make much sense as the real action is in the online multiplayer, that’s the down side in My opinion.
This  game really is meant to makes its way to console because of the party type factor of the game. The online multiplayer is fun don’t get me wrong, but if you are a random playing against a bunch of titans its going to shy you away.  I would like to see better match making for those noobs trying to get into the game and keeping the Titans on their own courses. I always seemed to be matched up with guys whose skill level was off the charts.
The unlocks are awesome and the map editor feature is fantastic to have as it gives the game replayability once the honeymoon phase is over . The game is so simple anyone can pick up and play, casual and hardcore alike. SpeedRunners is faced paced, has tons of action and will have you on the edge of your seat 99% of the time .