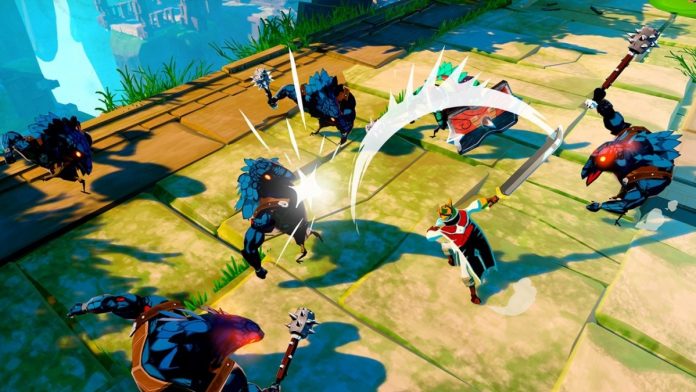 Stories: The Path of Destinies is a swashbuckling action RPG with gorgeous levels and aesthetics, engaging characters with great personality and a fun story-book like adventure. The game allows the player to take the role of Reynardo, a rogue-like fox adventurer, who finds himself in the middle of a conflict. In Stories, the player is prompted make various choices, which in turn determine how the story of the player’s goal of achieving the happy “good” ending will unfold.

Reynardo fights for the Rebellion who is fighting a war with an Evil Empire led by a maniacal Toad Emperor set on conquering and controlling the land of Borea. Unfortunately, the Rebellion is on the precipice of losing the war and Reynardo is desperate for a resolution. This is where your quest kicks off and the player is presented with the first of many, MANY choices. Reynardo jumps into his trusty ship, the Farfairer, in the hope of finding a mythical weapon which he has heard can give him the power to end the war for good. However he also learns that his friend Lupino has been captured. With his friend’s life now in danger, Reynardo has a decision to make – should he go in search for the ultimate weapon, or set off to save his friend?

Choices are the running theme of Stories, and every decision you make as the player reveals another timeline of the larger tale to be told. The game feels much like a mash up of the movie Groundhog Day meets the Princess Bride which then incorporates a game of Dungeons and Dragons. Reynardo’s quest, or in this case stories, are each broken up into five chapters of a book with a starting point based on where you think you should go next. However, each chapter can take a pivotal turn based on your decisions within the level, which ultimately all culminates in a resolution by the end of chapter five. Should you choose wrong, the results could end poorly for our hero. However, should you choose correctly, that decision could push you toward the happy ending.

Do not fret however, as the book will return to the beginning of chapter one, give you the chance to correct your mistakes, and make all new choices in your endeavor to vanquish the evil Emperor.

Unlike many games that use branching paths that more often than not result in the same ending, Stories really does a great job of returning the power of choice to the player. There were a few times during my play through where I really pondered the consequence of my actions based on my past decisions and truly felt invested when that decision did not pan out. I did eventually make it to the happiest ending in the game but the brilliance is that even as the credits rolled, I could not wait to jump back in to see how other decisions I could have made would affect the final outcome.

Being that Stories is an action RPG I really enjoyed the approach that Spearhead Games decided to take when it came to weapons, upgrades and skills. You earn upgrades for your weapons by finding chests within each level that contain health and magic refills, and oars for upgrading swords. However, some chests also contain elemental spheres needed to upgrade your weapons. Larger chests, which are usually locked behind elemental doors often contain power gems that can give Reynardo added boosts such as increased speed, increased damage to enemies, or added protection from magic spells and enemy attacks.

Players’ skills are increased during battle when you take on the Toad Emperors Raven forces in combat. Based on how you take down foes using combos and earned skills, will determine how XP is earned. I found that early in the game the XP seemed a bit generous but began to trickle out slower later in the game. This resulted in me leveling up pretty quickly initially but could result in a bit of a slog if I decided to push forward passed achieving the best ending or in pursuit of the Platinum Trophy on the PlayStation 4. As you again XP, you can assign your earned points to any of the numerous attributes at Reynardo’s disposal such as upgrading his very own hookshot, dash or grab attacks, and health or stamina.

Combat in Stories is simplistic yet satisfying. I found it to be a very welcoming and accessible change over some other convoluted systems of other games in the action RPG genre. Moves are regulated to a few key button prompts and Reynardo’s self-proclaimed “Sword Fu” fighting styles felt pretty fluid for the most part. Counters and sword attacks are handled with a single button and simply require timing, but can be combined with dash and hook shot attacks to compliment you in a fight. Each elemental sword also brings its own set of attributes and gives our hero added abilities and powerful attacks. My only real complaint with the battle sequences is that they can at times feel a bit repetitive and I wish that Spearhead Games would have thrown in a few other enemy types other than the ravens to fight but believe me that is a small quibble. Hopefully, this is something that the team can address should they decide to share another adventure in this fun world. Allow me to also add that the enemies are no pushovers. If you are not careful and on your game, allowing them to surround you could bring an untimely end.

I could not end this review without saying just how funny this game is. Spearhead Games and narrator Julian Casey are to be commended for the excellent job of keeping things witty and interesting, especially in a game that requires multiple play-throughs to reach the goal. There are so many expertly crafted pop culture, film, television, and gaming references throughout that I had a hard time keeping up with them all. While Stories uses many of the video game tropes that we have become accustomed to, it has no problem poking fun at itself by bringing those same tropes to your attention. Julian Casey does a superb job of bringing the narration to life while also giving voice to the game’s characters.  Casey does so with the same care a father may use when reading a bedtime story to his children.

This game surprised me.  That doesn’t happen very often. At first glance I believed that I had Stories: The Path of Destinies figured out, but I was genuinely surprised by what this game has to offer. It goes to show that you should never judge a book by its cover (bad pun completely intended) because you could truly miss out on a great experience. For me, Stories was a breath of fresh air in this nonstop world of bullets and blasters. I strongly recommend that you give this game a try. Your inner child just will thank you for the adventure!

Stories: The Path of Destinies is available now for PlayStation 4, Steam, Humble Bundle, GOG, U-Play. This review was conducted on the PlayStation 4 version of the game.