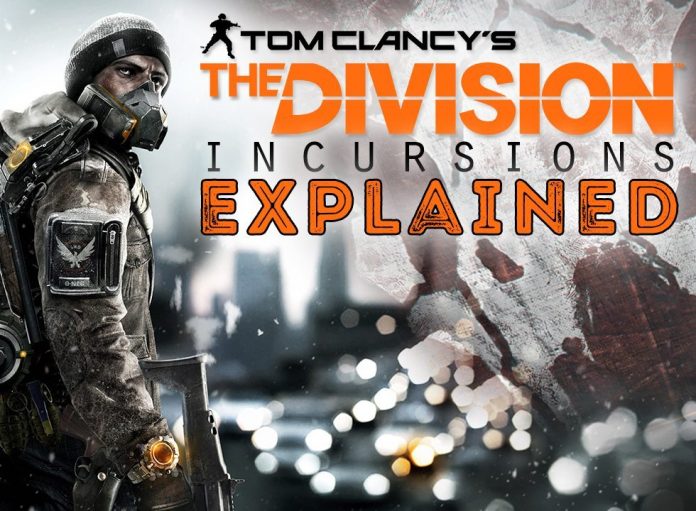 Thursday saw an announcement on the long-awaited Incursions for Tom Clancy’s The Division. With so much information now out in the open, you may be wondering exactly what Incursions are and how they impact you as a player.

Here are some answers.

Incursions are free expansions for The Division, and two have been confirmed thus far. They’re somewhat similar to Destiny‘s Raids – intended to be played as a group and will be extremely challenging and rewarding. Developers at Ubisoft recently sat down and discussed the new content during a Twitch broadcast.

The first Incursion for The Division is titled “Falcon Lost” and will be available on April 12th as part of the game’s first major update. In Falcon Lost, you and other Division agents will enter a new section of the underground sewer system of New York, making your way to a water treatment plant. The treatment plant is occupied by a garrison of Last Man Battalion troops, commanded by Captain Perez. The LMB’s fallback position is no coincidence, as they’re holding the water supply hostage, forcing a close conflict. In the confines of the underground plant, you’ll face a variety of enemies, including new drones and an armored personnel carrier (APC). Ubisoft confirms players will have to think outside the box to eliminate the APC, as conventional weapons are ineffective. Future Incursions will have different mechanics. The developer is also touting the amount of voice acting done for Falcon Lost, promising a more varied gameplay experience.

The Incursion is also expected to be very difficult. Developers warn,”Do not expect to beat it on the first try, or the second – or the tenth.” Not only should players meet gear score recommendations, but they need to coordinate with their teammates to approach the mission tactically. The addition of gear score changes The Division‘s endgame significantly. Similar to Destiny‘s “Light” system, once players in The Division reach level 30, that ranking is replaced with a gear score, which is dependent on equipped items. For example, High-End (yellow) items generally have a gear score of 201, while Superior (purple) items rank in at 131. Falcon Lost has a minimum gear level of 150, which likely means a mixture of High-End and Superior items. Players’ gear score will appear in the bottom right of the main menu, and Ubisoft reports players can see the gear score of other players. The Incursion also has a “Challenging” mode, with significantly higher requirements and extremely powerful enemies.

There are no checkpoints in Incursions. If your group dies, you start over. Players can complete Incursions as many times as they like, but a special bonus is rewarded for the first time every week. This applies to all characters, meaning players could cycle through their characters and complete the Incursion for the bonus reward up to four times. This may sound tedious, but the Incursion bonuses are compelling.

Among the potential rewards for completing Incursions are new High-End weapons, and even gear set pieces. Gear sets are new to The Division, but are popular in other role-playing games like the Diablo series. During the Twitch steam, Ubisoft developers confirmed several new gear sets, but revealed little about them:

Developers say gear set pieces have the same gear score as High-End items, but don’t have talents individually – instead, bonuses are unlocked with each piece equipped. Once four pieces are equipped, a special, never-before-seen talent is unlocked. These set-specific talents are purpose-built for the set’s playstyle. This means your hard-earned High-End gear isn’t necessarily obsolete. Ubisoft also reports gear set pieces are obtained in different areas of the game, not exclusively from Incursions like Falcon Lost.

Similarly, the free update includes other new experiences, like Dark Zone supply drops. Developers say supply drops fall from the sky in the Dark Zone every hour or so, and contain excellent rewards. As they come from outside the Dark Zone, the items do not need to be extracted, and can be immediately equipped. Be prepared to fight for these drops though – they are guarded by NPC enemies, and you’ll likely bump into other players willing to go Rogue for the rewards. It’s first come, first serve with supply drops – Ubisoft says only the first group to get to the drop reaps the rewards.

With the free expansion, players will finally be able to share those rewards. Ubisoft confirmed loot trading is coming to The Division and actually detailed how it will work. To trade an item to a player, the other player must be in their group. If the players are in the Dark Zone, they will have to enter a Dark Zone gate. Players can then drop an item, and the other player in the group can pick it up. This provides a safe area where other random players can’t steal items. Items will remain on the ground for a maximum of two hours.

More daily and weekly assignments are on the way as well. These are touted as optional side goals that can reward players with Phoenix Credits, Division Tech, and other rewards. They are divided into three themes: Dark Zone, Combat, and Crafting. Players can complete these assignments as part of other activities, like daily missions and challenges.

Lastly, Ubisoft has announced a change to the spectator camera after death, which will follow your teammates, allowing for tactical support.

All of these charges are part of The Division‘s first free update, set for April 12th. Developers say they continue to read player feedback on the Ubisoft official forums, Twitter, Facebook, and even other websites like Reddit. Players should expect regular balancing changes and tweaks to The Division on a weekly basis.

Incursions will later be followed by another free update, Conflict, which adds a special incursion into New York’s Columbus Circle, as well as new Dark Zone features. Additionally, three paid DLC expansions are planned throughout the year – Underground, Survival, and Last Stand – which will introduce new areas and threats to The Division’s open-world New York. Xbox One players will have 30-day exclusive early access to Underground and Survival, although Incursions, Conflict, and Last Stand will debut on all platforms simultaneously.