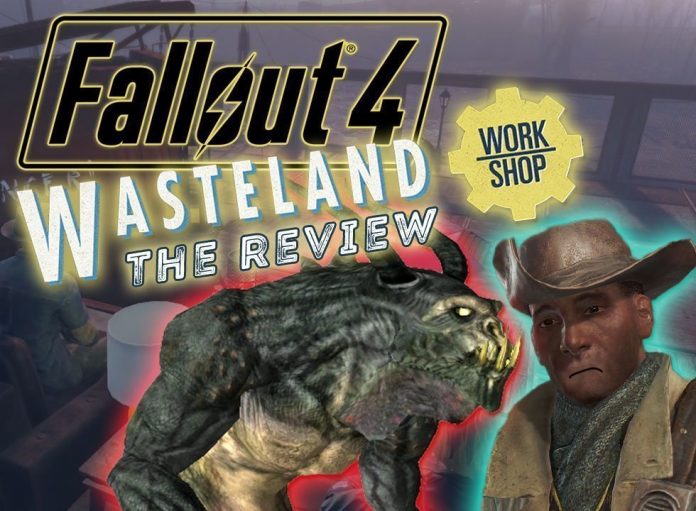 Finally, April 12th has arrived, and with it, Fallout 4‘s second pack of downloadable content. Wasteland Workshop was touted as a shot in the arm for settlement aficionados, providing a wide variety of new items to play with in Workshop Mode.

Does it live up to the hype? Let’s find out.

Among the major additions are the concrete building options. These include new walls, floors, roofs, stairs, and railings. Bethesda even anticipated the massive spike in the need for concrete, and added an option to purchase quantities of 100 or 200 from standard general goods merchants. This definitely makes Wasteland Workshop more enjoyable, since you don’t have to spend all day hunting for it.

Once you have purchased the supplies from the merchant, it only takes a couple in-game days to replenish. The concrete aesthetic makes for very imposing structures, meaning you can make intimidating bases, death mazes, or a massive arena. Bethesda even added powered doors to ensure no one escapes settlers don’t wander into a place they shouldn’t be.

Wasteland Workshop also adds a variety of new lighting options, ranging from pre-war table lamps and nixie tube lighting, to candelabras and victorian street lamps. Players will also be pleased to see the addition of neon lighting, including individual letters for custom messages (if you don’t want lit letters, Bethesda also added stickers). Track lighting has also been added, to provide more illumination in specific areas. Thankfully, most of these lights don’t require direct power, or consume any electrical resources.

Bethesda also added some resources as part of Wasteland Workshop, and one of them could not have come sooner. The fusion core reactor produces a whopping 100 power, for relatively few materials. It might be tempting to run everything off of a single reactor, but don’t put all your eggs in one basket – if raiders take it out, your entire settlement’s grid (lights, water, defenses, etc.) goes dark. Best to keep a couple other generators humming away as a backup. A larger ground water pump was added as part of the DLC – useful in locations without a standing water source – and Bethesda also added gardening plots for wasteland wanderers who need to have their crops perfectly organized.

Another big selling point of Wasteland Workshop is the creation of traps and arenas. The expansion adds several different traps (saw blades, impaling spears, floor spikes) to dispatch your would-be enemies or make your arena even more deadly.

The arena mechanic is actually very complex. You can run an arena three different ways: pit settler against settler, creature against creature (wait until PETA hears about this), or settler against creature. Of course, you could place a Beta Wave Emitter and have tame Deathclaws running around, but what fun would that be? Wasteland Workshop provides two platform types for contestants (red team and blue team). You can assign a character to each platform, and as soon as they are assigned, they will view each other as hostile and attack each other (creatures will automatically attack settlers and each other when released). Unfortunately, if your characters are not marked as essential by the game, they will die permanently. Characters like the lovable Preston Garvey, however, will only become incapacitated. I also had several instances where settlers who were supposed to be spectating (as well as turrets) engaged the creature in the arena.

So if you have built an arena, what kinds of creatures can you battle? The answer is: pretty much any type. You obtain creatures by building and powering a creature-specific cage. Once a creature has been captured, just power off the cage, and the creature is released. Different cages have different requirements (different baits, etc). You can even capture human combatants like Raiders and Gunners. Some of the larger cages are rather hilarious in appearance, and speak volumes about their intended target’s intelligence.

Overall, Wasteland Workshop really freshens up the settlement-building experience in Fallout 4. It was pretty robust to start with, but the new DLC provides players with a greater sense of control and further options for personalization of their settlements.

Some critics of the expansion pack may say it’s just an attempt by Bethesda to squeeze some money from customers before mods are supported on consoles, allowing more freedom over the game’s experience. While valid to some extent (particularly with some settlement items), the majority of Wasteland Workshop is a new experience, and certainly worth the $4.99 price tag.

If there’s any downside to the new content, it’s that Bethesda did not expand the settlement build cap/limit. With so much new content, players will run out of room quickly in Workshop Mode. Thankfully, there’s a glitch for that:

Wasteland Workshop is available now on Xbox One, Playstation 4, and PC. Below is a list of all the items added in the new Fallout 4 DLC.

What are you planning to build with your new tools in Wasteland Workshop? Tell us in the comments!