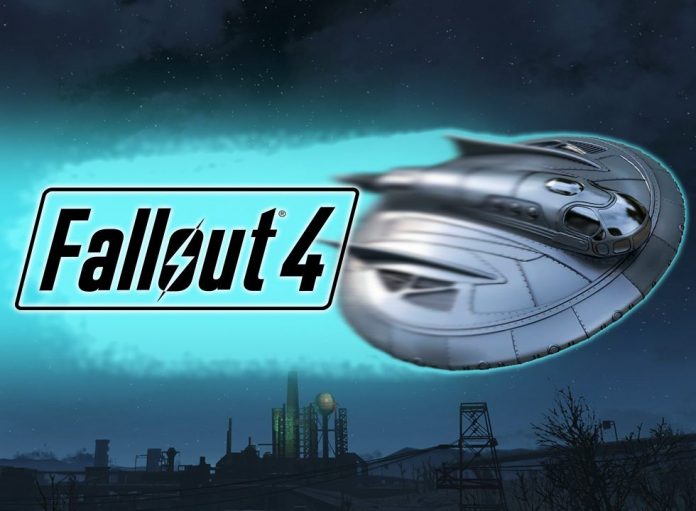 When you look up at the night sky in Fallout 4 for a while, you begin to notice things.

For fans of the Fallout series, Aliens are nothing new. For those unfamiliar, spoilers follow.

Aliens have been a staple of the franchise since the original Fallout, released in 1997. We also encountered these aliens (or Zetans, as they are known in Fallout lore) in Fallout, Fallout 2, Fallout 3, and Fallout: New Vegas. Little is known about them – we don’t know what planet they are from, let alone which system. However, it is made abundantly clear on several occasions that they are hostile to humans.

The most significant encounter with Zetans occurs in Fallout 3‘s downloadable content (DLC) Mothership Zeta. After being abducted, the player learns Zetans have been observing and abducting humans as early as the 1600s. Some of the most prominent abductees are a Samurai from feudal Japan, and Colonel Hartigan – an American astronaut abducted while returning from a low-orbit mission. Mothership Zeta is one of the more unbelievable DLCs, with the player interacting with people from different eras, held on board in stasis for hundreds of years.

Still, players are provided a wealth of information via holotapes. These Alien Captive Recorded Logs bear witness to the horrible experiments performed on abductees and the potential motivations of the alien captors. The alien experiments range from dismemberment to torture – and naturally some probing. The Zetans were also busy trying to create a human-alien hybrid. These abominations were hostile to every creature other than each other – including their alien creators.

So why is any of this relevant to Fallout 4? Well, players can find a crashed alien craft southeast of Oberland Station. The craft appears to have careened through some trees before impacting the ground. If the player follows the green blood trail to a nearby cave, they can come face to face with a little green man. The Zetan attacks immediately, and once killed, yields the unique alien blaster pistol. The encounter proves aliens are still around, even after the Lone Wanderer’s takeover of Mothership Zeta in Fallout 3.

In fact, there may be more alien activity going on than ever before. Players patient enough to glimpse the starry sky at night will notice many things aside from its beauty: Movement against the dark backdrop of space. Objects flying across the horizon. Lights streaking across the sky.

A typical response would be to say they’re airplanes or meteors, until you realize you’re in a post apocalyptic wasteland where airliners haven’t flown for hundreds of years. Sure, the Brotherhood has the Prydwen and vertibirds, but these are painfully slow – nothing like the streaks in the sky, which more far too fast to be airplanes. As for the meteor theory, many of these streaks suddenly change direction, suggesting a spacecraft. Some could be attributed to small bugs or dust, but the behavior is odd. I don’t want to go all Giorgio Tsoukalos on this, but the implication is clear. Aliens are still flying around Earth, though what they’re up to is unclear. And judging by the numbers, there are a lot of aliens. I counted several dozen unidentified flying objects (UFOs) in the night sky of Fallout 4‘s Commonwealth – in just one night. Even if just a small percentage of these sightings are legitimate aliens, that’s still a lot of activity. Does this mean we’ll see more from the Zetans in future Fallout 4 DLC?

It’s easy to forget with all the hubbub surrounding the massive, upcoming expansion Far Harbor, that Bethesda has promised us at least one more series of DLC for Fallout 4. While it’s not clear what will be included in the other DLC, Bethesda may have tipped their hand early on that we’ll be seeing more from the infamous Zetans. One of these clues can be found in the game’s concept art, which not only features a live alien, but a “preserved” one.

Yet there is no preserved alien in Fallout 4. Perhaps it was cut as part of the game’s development, or perhaps Bethesda is saving it for down the road.

Space is one of the most interesting and unexplored aspects of the Fallout Universe. Aside from Mr. Pebbles the space-cat and the Virgo II lunar lander, we don’t know much about mankind’s exploration of the cosmos. We do know the United States made it to the Moon in Fallout lore, and there’s even reference to a major battle (presumably against the Chinese) at the Sea of Tranquility on a plaque in Concord’s Museum of Freedom in Fallout 4. Bethesda could answer these burning questions with a Moon-based DLC. It’d also be a great opportunity to deepen the character of the Zetans, assuming they’re somehow involved.

Regardless of what Bethesda does in future Fallout 4 DLC, one thing is for certain: if the sky is to be believed, we are not alone, and we’ll see the Zetans again – sometime soon.

What do you think about the lights in the sky over Boston? What are they? Tell us in the comments!